Mumbai Indians have reached the top of the points table after a complete all-round victory against Rajasthan Royals. Jasprit Bumrah's 4-wicket haul and Suryakumar Yadav's brilliant knock of 79* early on were the highlights of the game. 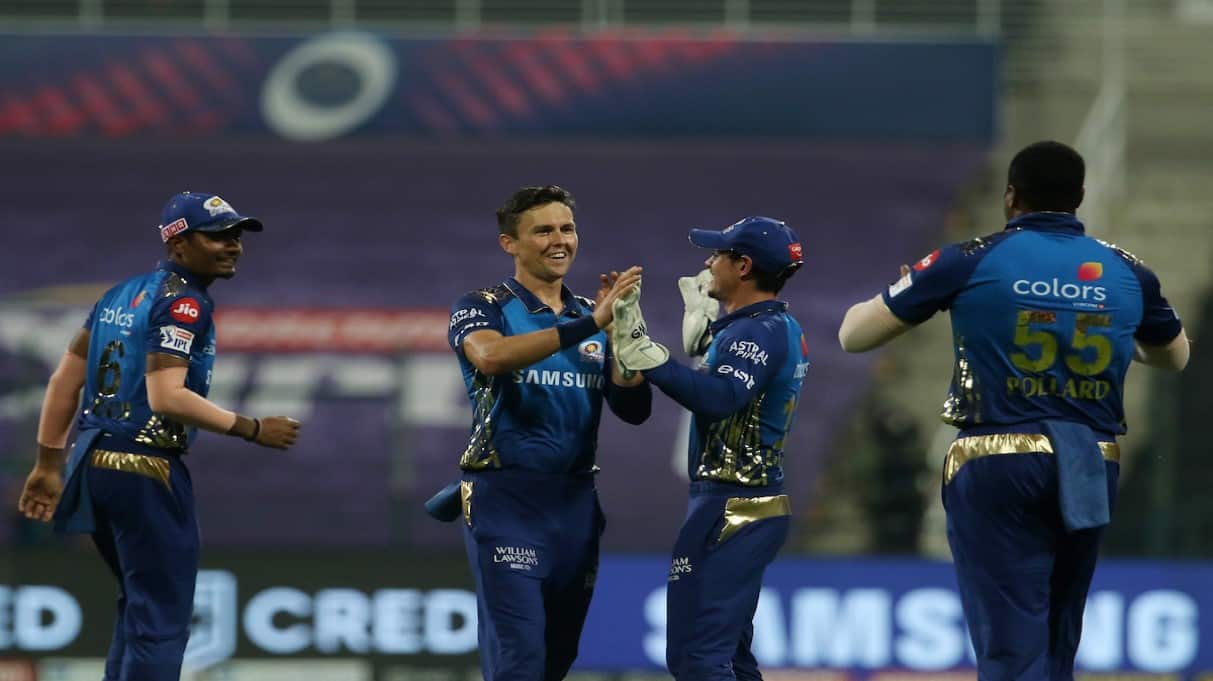 Defending Champions Mumbai Indians crushed Rajasthan Royals by 57 runs at the Sheikh Zayed Stadium in Abu Dhabi on Tuesday (October 6). Mumbai Indians thus jumped to the top of the points table after completing their fourth win from six matches.

It was a complete all-round show from the Mumbai Indians’ players which powered them to the huge victory. Jasprit Bumrah with the ball and Suryakumar Yadav (79 off 47 balls; 4x11, 6x2) with the bat were the highlights for Mumbai.

While some of them failed to time the ball, it was the opening damage that cost them in the end.

Star players like skipper Steve Smith and Sanju Samson got out early after playing rash shots and Rajasthan failed to recover as they lost the first three wickets inside three overs.

Jos Buttler, who had looked lackluster so far in the tournament regained his form in some style. At one stage it looked like he could rescue the match for Rajasthan from the jaws of defeat but it wasn't meant to be. He didn't get any support from the other end and had to take all the risk himself.

In the end he was unlucky as Pollard took an amazing acrobatic catch off the bowling of James Pattinson which put a full stop to his fantastic innings.

Jasprit Bumrah was in red-hot form as he picked-up four important wickets and returned amazing figues of 4-0-20-4. The pace spearhead had dismissed Rajasthan skipper Steve Smith early on and then in the middle overs, he delivered a lethal spell to keep the opposition batsmen in check. He took the wickets of Rahul Tewatia and Shreyas Gopal in the same over to land the final nail in the coffin.

Earlier, Mumbai had won the toss and opted to bat first. Skipper Rohit Sharma and Quinton de Kock gave a solid start to the four time champions, registering a 49-run stand for the opening wicket.

Debutant Kartik Tyagi provided the opening breakthrough when he dismissed the South African, De Kock. Suryakumar Yadav then came to the crease and started his innings with a flurry of boundaries.

Leggie Shreyas Gopal threatened to change the dynamics of the game when he dismissed Rohit Sharma and Ishan Kishan off consecutive balls but Yadav disrupted any such plans.

He played some outrageous shots against Jofra Archer and Tom Curran to power his side to a strong total. He was hit on the head in the penultimate over but gave a befitting reply to Archer, hitting a reverse scoop for a six.

Yadav was given good company in the end by Hardik Pandya (30 off 19 balls; 4x2, 6x1) as the duo powered Mumbai to a handsome total. Yadav was also given the man of the match award for his anchoring innings.

Mumbai Indians thus brought an end to their four match losing streak against Rajasthan Royals and are now looking like the frontrunners for the title.