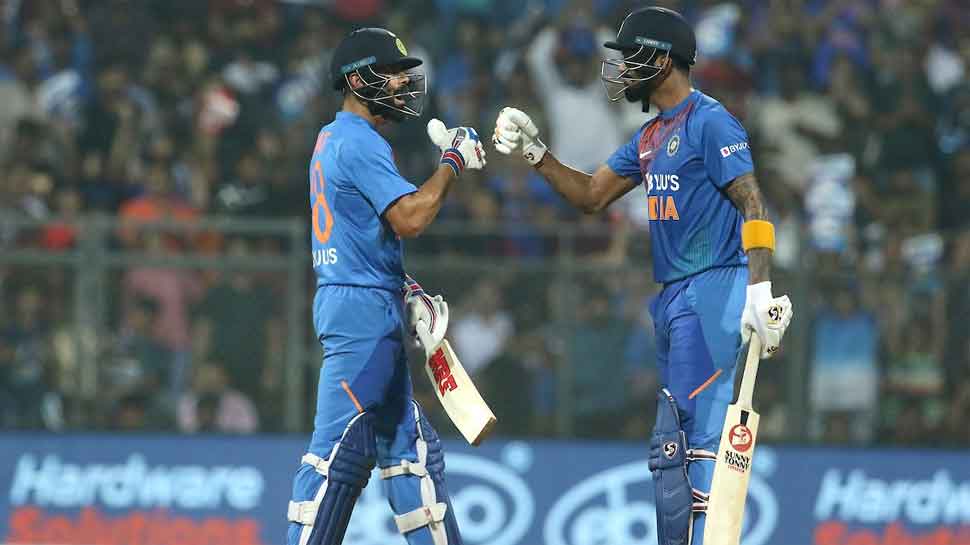 Mumbai: K.L. Rahul and Rohit Sharma shared a hundred-run opening stand before skipper Virat Kohli bludgeoned an unbeaten 70 off just 29 balls as India batted the West Indies out of the series-deciding third T20 International to win it by 67 runs and grab the series 2-1, at the Wankhede Stadium here on Wednesday.

The Windies lost destructive opener, Evin Lewis, even before they started their chase as the opener picked up a knee injury while fielding and could not continue.

The visitors were reduced to 17/3 before Kieron Pollard (68) and Shimron Hetmyer (41) shared a 74-run stand for the fourth wicket to keep the visitors in the game. But once Hetmyer hit Kuldeep Yadav straight down long on`s throat where Rahul took the catch, it looked all over.

However, Pollard kept their slim chances alive with some big hitting. The captain finally got out, trying to go for one too many as the asking rate was touching 20 runs per over.

Bhuvneshwar Kumar had the West Indian caught by substitute Ravindra Jadeja at deep midwicket in the 15th over, and from there on it was only a matter of time before India wrapped up the proceedings as West Indies managed 173/8 in the end of 20 overs.

Mohammed Shami, playing his first T20I after two-and-a-half years, returned impressive figures of 2/25 from his four overs, while Kuldeep Yadav -- back in the side after a while -- Bhuvneshwar and Deepak Chahar also picked up two wickets each.

Earlier, Rohit got off the mark with a delectable lofted cover drive in the second ball of the match to set the tone.

In the second over, Rahul hit Jason Holder for two consecutive fours only for the West Indies Test captain to comeback with two excellent deliveries to end the over.

At the other end, Rohit looked like a man on a mission as he took 16 off Cottrell`s next over, hitting the pacer for his 400th six in international cricket and then going on to caress two more fours.

Rahul also got into the act by welcoming Kesrick Williams with two fours and a six in the sixth over as India zoomed to 72/0 inside the Powerplay.

Rohit brought up his 19th T20I fifty off just 23 balls by hitting left-arm spinner Khary Pierre for two sixes while Rahul also notched up his eighth half-century in the format off 29 deliveries as India raced to 102 in eight overs and were 116/0 at the halfway stage.

Williams finally ended the opening stand as Rohit holed out to Hayden Walsh at deep midwicket in the 12th over.

Rishabh Pant was promoted to No.3 but the big-hitting wicketkeeper-batsman picked out Holder in his second ball off Pollard to continue his poor run with the willow.

Kohli joined Rahul in the middle and took on Holder in the 15th over, hitting two fours and a six as 22 runs came off it.

In the last five overs, Kohli and Rahul took the Windies bowlers to the cleaners as India amassed 67 runs. Kohli smoked his counterpart Pollard for two sixes in the penultimate over to bring up his 50 off just 21 balls.

Rahul missed out on his third T20I hundred as he was caught by wicketkeeper Nicholas Pooran off Sheldon Cottrell in the final over.