India posted a series-levelling win over England on Day Four of the second Test in Chennai on Tuesday, with a 317-run win. Chasing 482 to win, England were bundled out for 164 just after lunch on Day Four with left-arm spinner Axar Patel picking up 5/60 on debut. 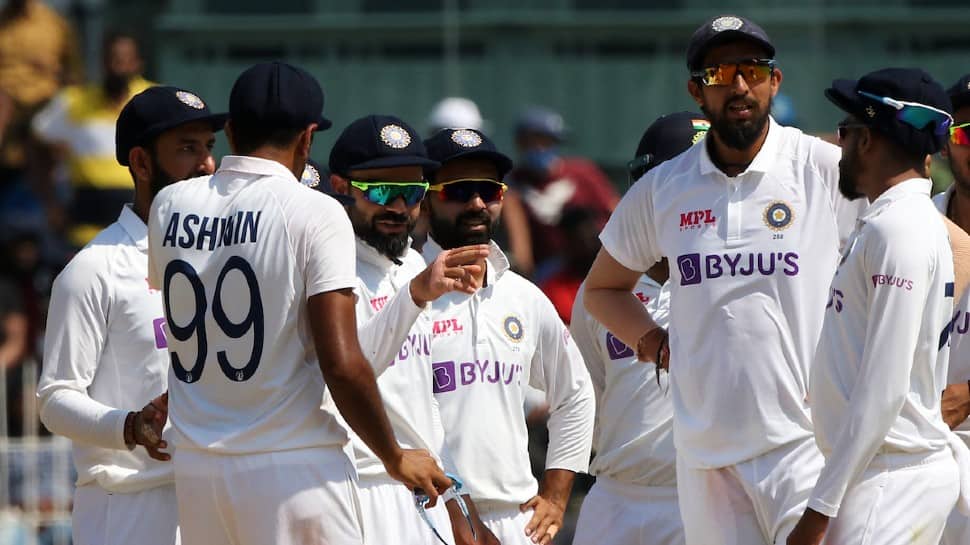 India levelled the four-match Test series at 1-1 with a massive 317-run win over England on Day Four of the second Test in Chennai on Tuesday. Axar Patel struck immediately after lunch to send back Joe Root for 33 to reduce the visitors to 116/8 after the hosts set them a target of 482 to win.

The left-arm spinner picked up a five-wicket haul on debut, sending back Olly Stone for a duck. Patel ended with figures of 5/60 as England were bowled out for 164 in 54.2 overs. R Ashwin picked up 3/53 while chinaman bowler Kuldeep Yadav ended up with 2/25 with the ball.

Closer to the lunch break, Root, on 31, survived when Mohammed Siraj dropped a sitter in the point region after the England skipper went for a reverse sweep off Kuldeep.

Earlier, local star Ashwin struck with his first ball of the day when he had Dan Lawrence (26, 53 balls, 2X4, 1X6) stumped brilliantly by Rishabh Pant off a delivery wide down the leg-side.
Stokes (8), usually an aggressive player, was defensive on Tuesday.

Tune into Zeenews.india.com for Live Updates on second Test

That's all for today. India celebrate a dominant 317-run win over England in the second Test in Chennai on Friday. Now they have a break of one week before the third Test -- Pink-ball Test -- gets underway at the Motera stadium in Ahmedabad on February 24.

Tune into zeenews.india.com for IPL 2021 auction on Thursday (February 18).

R Ashwin (Man of the match): Keeping intent was important

I think keeping the intent was very, very important. I was having a chat with Rohit and the batting coach (Vikram Rathour) about the options to put pressure on the bowler than waiting for the loose balls. First couple of sweeps I connected, I got a hang of the wicket. I'm someone who tries hard, and when it doesn't go my way, I try harder.

It's not just Vikram alone, it was more about hands and getting through the ball, think tactically and not technically. Ajinkya (Rahane) told me I was overthinking and that innings at Sydney set the tone for me. I'm so happy that it happened in Chennai that I got a hundred and five-for.

Virat Kohli: Toss wouldn't have mattered on this pitch

I don't think the toss would've mattered much in this pitch, and we believed we could score runs in the second innings and got almost 300. Look, Pant has really worked hard in Australia and the difference when he moves with the gloves you can see in his reflexes and reactions. He has shed a lot of weight in Australia and it shows and we want him to get stronger and stronger with his skill sets because we know how much value he adds to the team.

It's a special, special moment for Axar. He'd have played the first game too if not for a niggle. He bowls fast and is all smiles, and hopefully he builds it here from here on. I've taken a lot of pride in correcting mistakes quickly, which I haven't done in the past because I'm rigid.

But, I want to correct those quickly now. Ashwin batted outstandingly well and in the second half I decided not to go after runs and I'm going to trust my defense to get me out of trouble. Yeah, pink-ball cricket is going to be challenge and we expect no easy cricket from England. The energy and enthusiasm from the crowd is really important for us.

Things were flat in first Test, including myself: Virat Kohli

Look, it was a bit strange in the first game to play at home without crowds in the stands. Things were flat to be honest, and myself included. We needed to pick up the energy. We were on the money this game and the crowd makes a massive different and you push more as a team.

This game is an example of the grit and determination we've shown as a side. The Chennai crowd everyone knows is very, very intelligent and they understand their cricket really well.

India outplayed us in all departments: Joe Root

I think credit has to go to India, they outplayed us in all departments. We have to learn from this and find ways to score in these conditions and bowl six balls to one better. On day one, we could have been tighter and made it harder for them to score freely as they did.

We have to learn quickly and that's something we've done in the recent past. The pink-ball Test will be different - one in Australia with Kookaburra and one in England with Dukes - and we're very much looking forward to that.

Indian spinners called the shots. R Ashwin, Axar Patel and Kuldeep Yadav picked up 17 out of 20 wickets against England in the second Test.

#TeamIndia's spin cartel rose to the occasion with 17 wickets in the match to register an emphatic win by 317 runs in the second Test #OneFamily #MumbaiIndians #INDvENG @BCCI pic.twitter.com/mmTYXEALD1

It was very important when your team is doing well to keep giving them support. Axar (Patel) and Ashwin were bowling very well, so my job was to maintain that control. It felt like a debut for me, because I've not played for so long. Bowling in a match is very different, no matter how much you bowl at the nets.

I always speak to Ash bhai a lot, even during the Australia tour. He was telling me a lot about where to bowl to which batsmen, what shots they like to play. We are always prepared to come back and perform in the next match. Even Rishabh's keeping was brilliant today.

Debutant Axar Patel says: It was a very good experience. It feels so good to pick up five wickets on debut. There was a lot of help for the spinners, so it was important to bowl at the right speed, because if you were too slow, there was time to adjust. So I was bowling stump-to-stump, and waiting for errors from the batsmen.

This is India's FIFTH biggest win in terms of runs in Test matches played in India. The biggest remains India's 337-run win over South Africa at the Ferozeshah Kotla stadium in Delhi back in 2015.

India wrap it up!

They seal a 317-run win and have levelled the series 1-1! #INDvENG pic.twitter.com/NKdpouEO6g

Over 55: All over in second TEST... India beat England 317 runs! Moeen Ali charges out at Kuldeep Yadav, easily stumped by Rishabh Pant for 43

Over 52: Last resistant from Moeen Ali...smashed Axar Patel for three successive sixes in last three balls of 52nd over

Over 52: Axar Patel picks up his fifth wicket on Test debut as Olly Stone walks back for duck, India need ONE more wicket to win