There were tons of tweets stating that Suresh Raina’s wife Priyanka has reportedly confirmed the news as well. 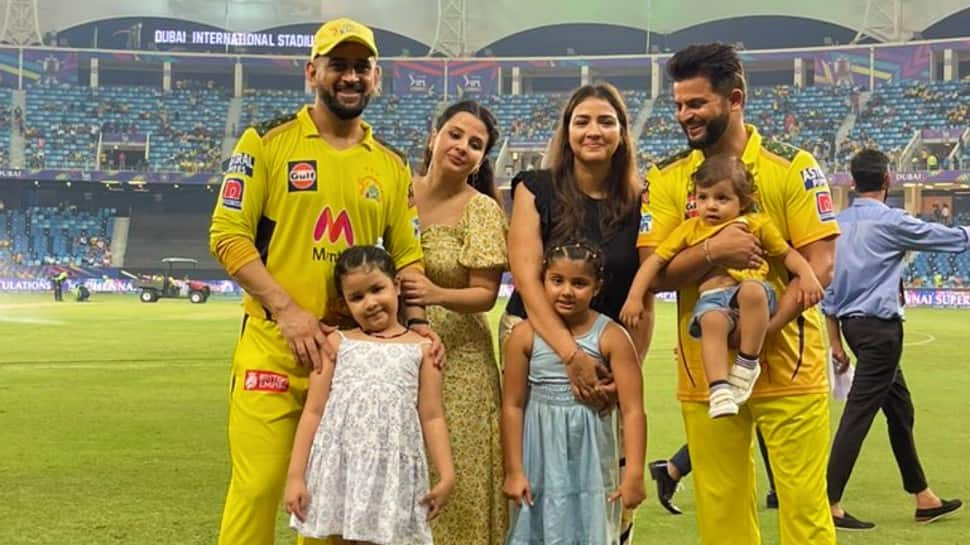 MS Dhoni with wife Sakshi and daughter Ziva pose with Suresh Raina and his family after the IPL 2021 final. (Source: Twitter)
Share:
Written By:

Dussehra turned out to be a special occasion for Chennai Super Kings and their captain MS Dhoni. In his 300th T20 game as captain, Dhoni led CSK to their 4th IPL title winning the 2021 final with ease against Kolkata Knight Riders. A day after the win, social media was buzzing with another happy news for Dhoni – that the former India skipper might be getting ready to become father for the second time.

The rumours and speculations on Twitter and various other social media platforms are yet to be verified, that didn’t stop the fans from congratulating the couple. There were tons of tweets stating that Suresh Raina’s wife Priyanka has reportedly confirmed the news as well.

The WAGs of Chennai Super Kings players had travelled with the team to UAE and were a regular feature in all the CSK matches. Dhoni’s wife Sakshi and their daughter Ziva have been a constant presence in all the CSK matches and the family also had a special moment after CSK won the title with Sakhi and Ziva hugging Dhoni in the middle amid title celebrations.

Dhoni's daughter Ziva is now 6 years old and was born while her father was leading India at the 2015 ICC World Cup.

Here are some of the social media reactions…

Meanwhile, Dhoni, who is set to join the Indian team as ‘Mentor’ for the T20 World Cup, spoke about how he would like to create a roadmap for the next 10 years of IPL that Chennai Super Kings will be playing. When asked if he was proud to have left a legacy behind in the 12 seasons for CSK, Dhoni assured his million fans with a wide grin, “Still I haven’t left behind...”

But he said that he hasn't decided how he would fit into the retention scheme of things. “Again I’ve said it before, it depends on BCCI. With two new teams coming in...We have to decide what is good for CSK,” the skipper said after his team won the fourth IPL title by beating Kolkata Knight Riders in the final.

“It’s not about me being there in top-three or four. It's about making a strong core to ensure the franchise doesn’t suffer. The core group, we have to have a hard look to see who can contribute for the next 10 years,” he added.