Former Indian skipper and experienced wicketkeeper-batsman Mahendra Singh Dhoni is currently enjoying his lengthy sabbatical from the game. From serving the Indian Army to spending some quality time with his family, Dhoni is definitely making the most of his break from all the formats of cricket. 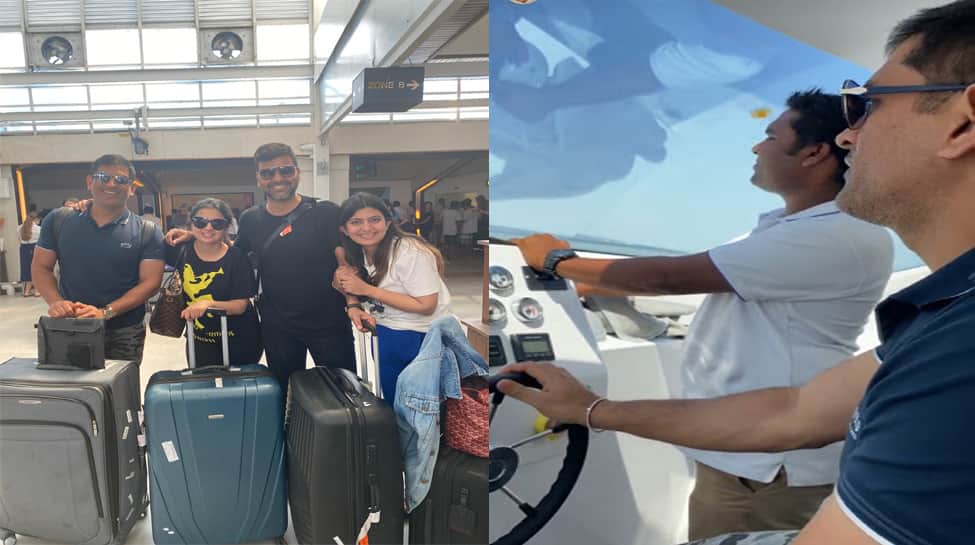 Former Indian skipper and experienced wicketkeeper-batsman Mahendra Singh Dhoni is currently enjoying his lengthy sabbatical from the game. From serving the Indian Army to spending some quality time with his family, Dhoni is definitely making the most of his break from all the formats of cricket.

After recently enjoying a vacation in the snow-clad locales of Mussoorie, Uttarakhand, Dhoni and his wife Sakshi Rawat have now taken off to the Maldives for another holiday along with his former teammate Rudra Pratap Singh and his wife Devanshi Popat.

Taking to his official Twitter handle, RP Singh posted a picture of the four with a caption, "Hello Maldives! Here we come!"

Besides Singh, Sakshi Dhoni--who is quite active on social media--too shared some Instagram stories from the vacation.

However, what caught the attention from a number of Instagram stories posted by Sakshi was Dhoni driving a speedboat in the sea.

Dhoni's love for high-end cars and bikes is not hidden from anyone. The 38-year-old is often seen driving a swanky bike or car during his time off the field. A convoy of hundreds of vehicles is even present in Dhoni's garage

But, the Indian wicketkeeper-batsman was seen driving a much bigger vehicle this time around.

In one of the stories shared by Sakshi, Dhoni can be seen driving a speedboat under the guidance of the captain of the ship while the fans gathered at the harbour entrance to take a glimpse of Dhoni.

Guess who is heading to Maldives !!

He has driven enough of Bikes and Jeeps, so for a change, drives a Speedboat to @visitmaldives !! #Dhoni pic.twitter.com/ShG0xL7BlC

Notably, Dhoni has been on an indefinite break since India's semi-final exit at the 2019 International Cricket Council (ICC) World Cup at the hands of New Zealand.

He missed series against South Africa, Bangladesh and West Indies before he was also not named in the Indian squad for the three-match T20I series against Sri Lanka and ODIs against Australia.

The experienced wicketkeeper-batsman is likely to make a return to the game for the Chennai Super Kings (CSK) in the 2020 edition of the Indian Premier League (IPL), which is slated to take place from March 29 to May 24, 2020.