Ahead of India's fixture against England, the color of  Indian team's jersey underwent a 'colorful' transformation. The Men in Blue added a splash of orange to their jersey to avert the clash in the color of the jerseys with England. 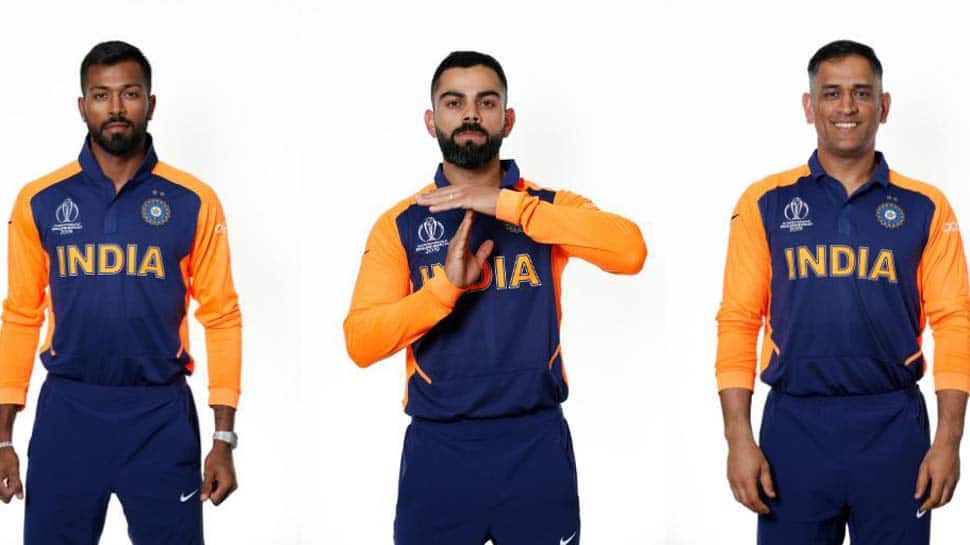 New Delhi: Ahead of India's fixture against England, the color of  Indian team's jersey underwent a 'colorful' transformation. The Men in Blue added a splash of orange to their jersey to avert the clash in the color of the jerseys with England.

After India's 'away kit' was unveiled, several cricketers took to their social media accounts to flaunt their new jerseys.

The official handle of Indian cricket team took to social media to share the pictures of Rohit Sharma, Yuzvendra Chahal, KL Rahul and Mohammed Shami in their new kits.

How many likes for this jersey ? #TeamIndia

What do you think of this kit?  #TeamIndia | #CWC19 pic.twitter.com/Bv5KSfB7Uz

Earlier, BCCI shared India's new jersey on Twitter and wrote, "Presenting #TeamIndia's Away Jersey  What do you make of this one guys? #TeamIndia #CWC19

"The ODI and Away Kit designs launched this year are inspired by the young new generation of India and the fearless spirit of the national teams," Nike,  official apparel sponsor of the Board of Control for Cricket in India (BCCI) said while confirming that India will debut its first-ever away kit in Birmingham.

"Similar to the recently launched ODI Kit, the away kit is designed to enhance dynamic movements and modern requirement of the sport and the athletes. While the new engineered mesh and strategically placed sweat zones help enhanced breathability for the team on the field, new placket construction, the flex crest, garment cut angles and slash taping all add to making the new jersey lighter, more breathable and helps the athletes be agile on the field," the statement added.

Four countries India, Afganistan, Sri Lanka and England had blue colored jerseys, therefore, they were asked to mark a distinction. During the Afghanistan vs India clash too, the Afghans had worn their red and blue jersey.

India will don their new jersey against England on June 30 at Edgbaston while the hosts will be seen in traditional light blue colors.

ICC World Cup 2019: South Africa out to have fun in their final matches at the World Cup