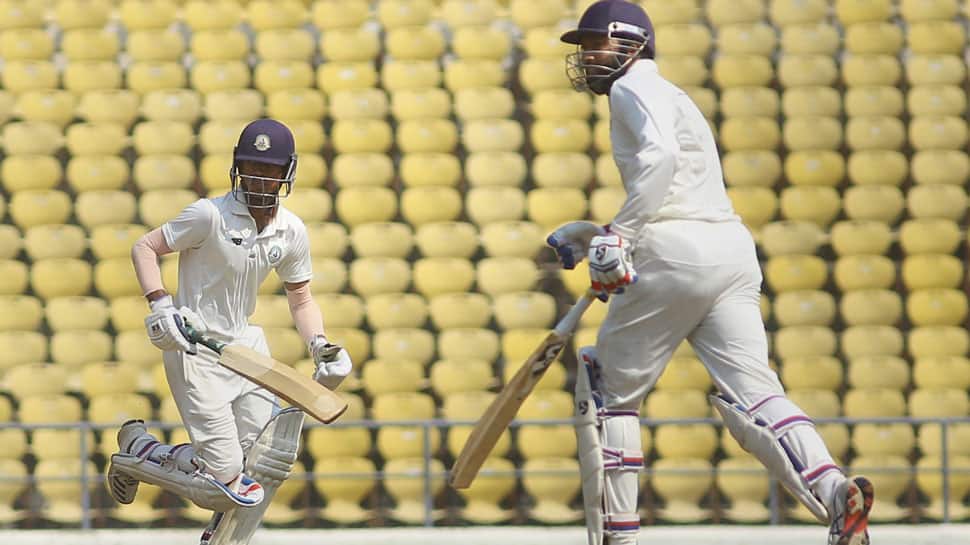 Skipper Jaydev Unadkat dismissed run-machine Wasim Jaffer with a gem of a delivery as Saurashtra dominated the opening day of the Ranji Trophy final by reducing defending champions Vidarbha to 200 for seven on Sunday.

It proved to be a good toss to lose for Saurashtra, who succeeded in dismissing the most impactful Vidarbha batsmen - Wasim Jaffer (23) and captain Faiz Fazal (16) -- cheaply.

Unadkat was consistently accurate with his nagging line and length while Sakariya swung the ball and troubled the batsmen with movement.

The defending champions struggled to stitch partnerships and had it not been for the 57-run seventh-wicket stand between Akshay Wadkar (45) and Akshay Karnewar (31 batting), they would have been in more trouble.

The batsmen were too circumspect, save Ganesh Satish (32) and Wadkar, who went for their shots in their small yet crucial innings. Mohit Kale (35 of 126 balls) too got a start but did not build on that.

Batting at number eight, Karnewar produced some lusty hits in a sensible knock in the final session.

Saurashtra would fancy their chances from here on, having finished runners-up twice in the last seven seasons.

Sakariya got only one wicket (he was unlucky not to get Jaffer lbw) and that too towards the fag end but was easily the best bowler of the day. In 14 testing overs he bowled, the diminutive pacer conceded just 13 runs.

However, all the action unfolded before empty stands despite it being a Sunday, with a handful of school students cheering for the home side, often teasing the fielders in the deep.

Left-arm pacer Sakariya got the ball to swing early on, troubling R Sanjay (2) while Unadkat asked a few questions to his counterpart Fazal with some swing and bounce.

Sakariya was rewarded when Sanjay went for a lazy drive and just managed an edge, which was taken by Arpit Vasavada in first slip.

Fazal too went back soon, though, following a bizarre dismissal. He rather gifted his wicket by slowing down a few steps away from the crease, thinking that the throw from the deep is going towards the other end.

Sakariya also troubled Jaffer with the moving ball and seemed to have dismissed Jaffer plumb but the vociferous appeal did not move the umpire.

Medium pacer Mankad and left-arm spinner Jadeja replaced the two opening bowlers but it was skipper Unadkat who dealt another blow to the hosts.

The bowler got a delivery to move away from Jaffer, who, without moving his feet, fished and edged the ball to the wicket-keeper. Unadkat jumped with joy and his fist-pumping celebration showed what the wicket meant to his side.

The innings moved at a snail's pace with the hosts opting for lunch at 67 for three in 33 overs.

Kale and Ganesh Satish resumed with Unandkat surprisingly, not bowling in the beginning of the second session. Jadeja created an opportunity when Kale flashed one hard to edge it behind but first slip Harvik Desai reacted late to see the ball pass him.

However, after some time Kale literally steered one from off-spinner Makwana to first slip and Desai did not miss the chance this time.

Before the wicket fell, Unadkat bowled a probing outside off line with perfect field setting. He kept hitting short of length, never giving the batsmen any opportunity to go for drives.

For Vidarbha, Satish batted with a lot of positive intent. He drove the ball when it was pitched up and did not mind going for cuts behind the square on back-foot. He also used his feet against spinners, playing a crucial role in keeping the Vidarbha innings together.

Wicketkeeper Wadkar, who had scored 98 against Uttarakhand in the quarterfinal at this venue, too offered good resistance as the hosts took tea at 130 for four.

Mankad got rid of Satish while Jadeja did not let Aditya Sarwate open his account in the final session.

Sakariya ended the resistance from Wadkar and Karnewar by removing the former, three overs before stumps.