South Africa wicket-keeper Quinton de Kock, who was waiting to collect the ball at the striker’s end, gestured as if to suggest that the throw should be at the non-striker’s end. 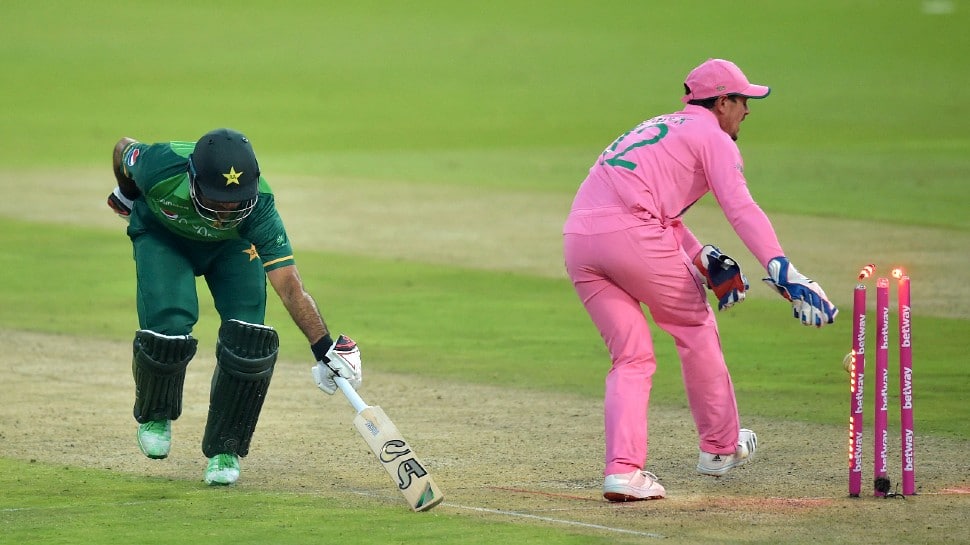 Pakistan opener Fakhar Zaman smashed the world-record for the highest score batting second – scoring 193 – but was cruelly left short of a well-deserved double century in the second ODI against Pakistan at Wanderer in Johannesburg on Sunday (April 4). Batting on 193 at the start of the 50th over with Pakistan needing 31 runs to win, Zaman decided to come back for a second run after playing the first ball towards the off side.

South Africa wicket-keeper Quinton de Kock, who was waiting to collect the ball at the striker’s end, gestured as if to suggest that the throw should be at the non-striker’s end. As Zaman was blindsided with his back towards the fielder, the stumps at the striker’s end were disturbed with a direct hit even as Zaman, who had presumed a throw at the other end, was found short of his ground.

Zaman’s valiant effort of 193, the highest-ever individual score in an ODI chase, was in vain as Pakistan fell agonizingly short of their target of 342 runs after finishing 324/9. The Pakistan opener’s dismissal courted controversy with the ‘fake fielding’ rule of the International Cricket Council (ICC) in place to deter fielders from distracting batsmen.

A strict action should be taken against such cheap act
The man was just 7 runs away from his 2nd century #fakharzaman #SAvPAK #QuintondeKock #pcb #shameful_act_by_Quinton pic.twitter.com/d4FN5yNrHb

Clause 41.5 of ICC Men’s ODI Playing Conditions deals with ‘Deliberate distraction, deception or obstruction of batsman.’ Clause 41.5.1 states that ‘it is unfair for any fielder wilfully to attempt, by word or action, to distract, deceive or obstruct either batsman after the striker has received the ball.’

Further, clause 41.5.2 says that ‘it is for either one of the umpires to decide whether any distraction, deception or obstruction is wilful or not.’

41.5.3 and 41.5.4 state the following: “If either umpire considers that a fielder has caused or attempted to cause such a distraction, deception or obstruction, he/she shall immediately call and signal Dead ball and inform the other umpire of the reason for the call. Neither batsman shall be dismissed from that delivery.”

The same clause 41.5 further states: “The ball shall not count as one of the over. Any runs completed by the batsmen before the offence shall be scored, together with any runs for penalties awarded to either side. Additionally, the run in progress shall be scored whether or not the batsmen had already crossed at the instant of the offence.

“The batsmen at the wicket shall decide which of them is to face the next delivery. The umpires may then report the matter to the ICC Match Referee who shall take such action as is considered appropriate against the fielder concerned.”

De Kock, through his gestures, seemed to ask the fielder in the deep to throw the ball at the non-striker’s end. However, the throw came in to the end where Zaman was running and the Pakistan batsman was short of his ground by some distance.

The on-field umpires did not object to the dismissal and Zaman had to walk back to the pavilion.