This day that year! India won the 2007 World T20 final against Pakistan – WATCH the dramatic last over again 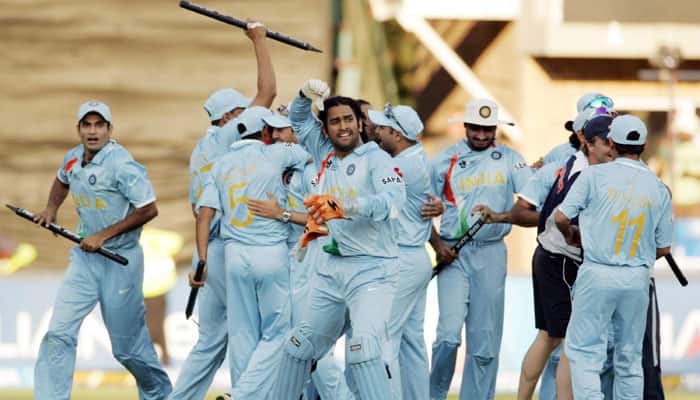 Batting first, India could only manage a total of 157 runs with what looked like a mediocre total for a pressure final game. Gautam Gambhir and Rohit Sharma were India's best performers with the bat with the score of 75 and 30 respectively.

Pakistan stuttered in their chase and looked to be heading towards a defeat after Imran Nazir was run-out on 33 by Robin Uthappa.

Later, it was Misbah-ul-Haq who solidified the innings and kept the chase alive till the final over of the game when his side needed 13 runs from the last 6 balls with a wicket in hand.

MS Dhoni is a skipper who trusts his instincts under precarious circumstances, he proved that once again by asking an unheralded Joginder Sharma to bowl the final over against Pakistan. (READ: Post Uri attack: Anurag Thakur slams 'sponsors' of terrorism, says no question of playing cricket with Pakistan)

The over began with Paksitan requiring thirteen runs and all eyes were on Misbah-ul-Haq, who had brought his side back into the game. India, on the other hand, were aiming for the last wicket to clinch the trophy.

Misbah-ul-Haq became the 10th wicket that India were looking for – S Sreesanth caught the well-settled Pakistani batsman - who might well have won his side the match had he remained not out the whole over.

India clinched the inaugural ICC World T20 title and defeated Pakistan yet again in the World Cups, maintaining their 100% record against the arch-rivals.

#OnThisDay in 2007, India won the first World Twenty20, beating Pakistan in a thrilling final in Johannesburg by 5 runs #WT20 pic.twitter.com/epG4j2Gw7X