It is also believed that two local goddesses transformed into one, known as Beeb Garab Maej—the mother goddess who is prayed to on this day.

No matter in which part of the world you are, Kashmiri Pandit community celebrates Pann Pooza with utmost gusto and reverence to the Lord. On this day, Beeb Garab Maej is prayed to and the day is dedicated to her.

Pann Puja or Pann Pooza as Kashmiris call it falls on the Vinayak Chaturthi (Vinayak Tchoram in Kashmiri) or Ganesh Chaturthi. It is originally associated with the spinning of newly produced cotton and worshipping the twin agricultural local goddesses, Vibha and Garbha to whom the devotees offer Prasad known as Roths.

A Roth is a sweet bread kind of a preparation which is first offered to the Goddess and then distributed amongst each other. It is also believed that two local goddesses transformed into one, known as Beeb Garab Maej—the mother goddess who is prayed to on this day.

Also, Lord Ganesha and Goddess Lakshmi are revered in the puja as well. Beeb Garabh Maej, the goddess who is worshipped on this day is seen carrying lota or a water pot which is placed at the Puja area. Then, most importantly, a single long cotton thread is tied to the pot's neck with a handful of dramun or runner grass kept inside it, pointing again to its agricultural origin.

Some of the rice, flowers and dramun grass is then distributed amongst the family members who sit in the puja and the Roth preparations are kept in front of the goddess and earthen pot to signify the prasad offering to the goddess. Also, some fruits are offered to the mother goddess besides Roth.

Then a legendary story of the Beeb Garab Maej is read by one person while others attentively pay heed to it. The story is quite similar to the Satyanarayana Katha. 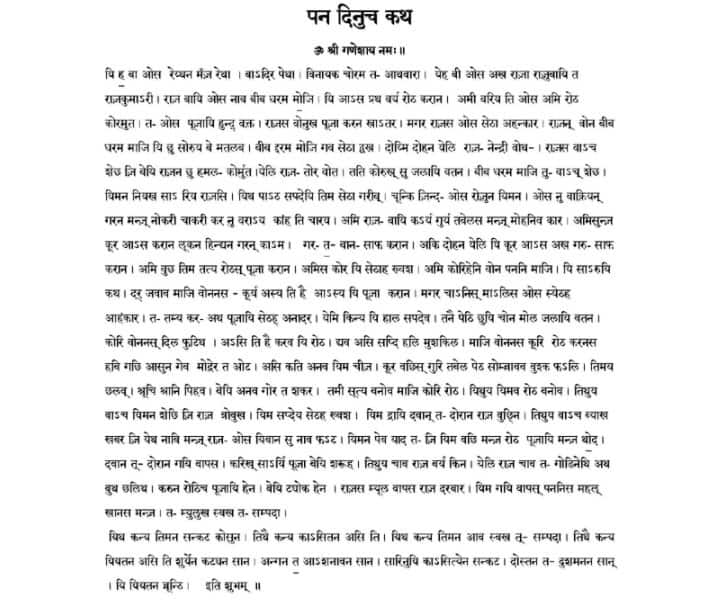 After the story (Katha) has been read, the people present at Pann Puja offer the dramun grass, rice and flowers to the pot and pray with folded hands to the goddess for prosperity and good health.

The prasad of Roth and fruits is consumed by the devotees and the rest of the Roths are distributed amongst friends and family. There is also a tradition which goes like, you distribute the exact number of Roths to particular families respectively and the practice of sharing the Roth prasad should continue year-after-year without a fail.

In the same month, there are different dates when the Roth Prasad can be made and Pann Pooza conducted. But the majority celebrates it on Vinayak Chaturthi.

Here's wishing everyone a happy Vinayak Chaturthi and Pann Pooza Mubarak to those celebrating!