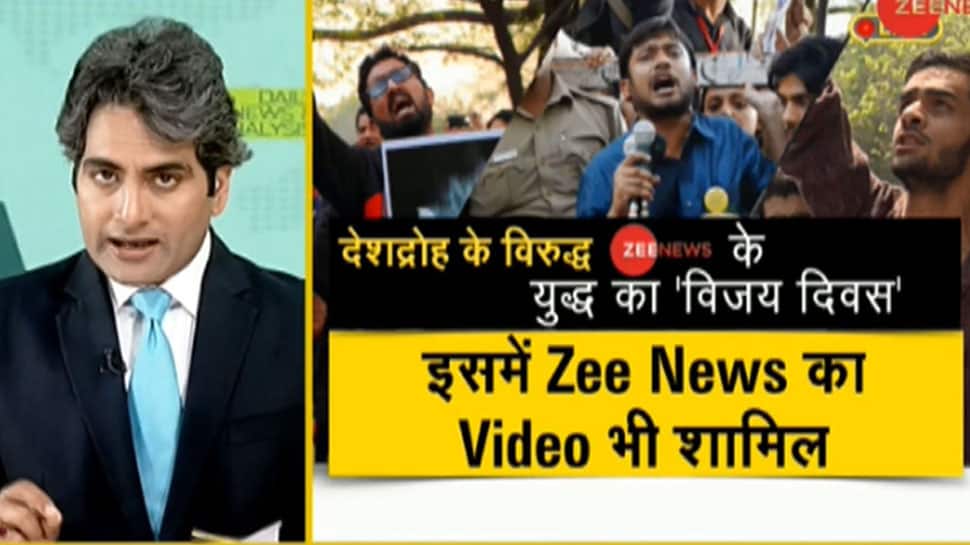 NEW DELHI: In a major vindication of Zee News' stance on the alleged anti-India sloganeering by some students of Delhi's prestigious Jawaharlal Nehru University (JNU) in 2016, the Delhi Police on Monday filed a detailed chargesheet against former JNUSU president Kanhaiya Kumar and several others on the basis of the channel's report.

A group of JNU students led by Kumar, Umar Khalid and Anirban Bhattacharya had allegedly raised anti-India slogans during an event held at the varsity campus in the evening of February 9, 2016, to mark the death anniversary of Parliament attack convict Afzal Guru.

It is to be noted that Zee News was the first TV news channel to have aired the controversial video clip showing several JNU students, including Khalid, Kumar and Bhattacharya, shouting anti-India and pro-Pakistan slogans at the varsity campus.

Vindicating the stand taken by Zee News in the case, the Delhi Police on Monday filed a 1200-page chargesheet naming Kumar, Khalid, Bhattacharya and several others for shouting anti-India slogans and slapped various charges, including sedition, against them.

The video of the controversial February 9 event was shot by Zee News and was later sent for forensic examination to the CFSL.

The video clip shot by Zee News, which came under attack from the alleged sympathisers of the 'Tukde Tukde' gang, was later found to be 100 percent authentic and not doctored.

Commenting on the development, Zee News Editor-in-chief Sudhir Choudhary, in his highly popular show DNA, said that the chargesheet filed by Delhi Police on Monday not only vindicated the channel's stand but also exposed those who questioned the video footage and claimed that it was doctored.

The Zee News editor-in-chief also slammed several leading politicians, the so-called intellectuals and a section of media for expressing solidarity with Kanhaiya Kumar and hailing him as a hero.

During his show, the Zee News Editor thanked millions of viewers for their unflinching faith and trust in channel's impartial coverage and reporting of facts and events.

Choudhary asked whether those attacking Zee News will now tender an apology and boycott the 'Tukde-Tukde' gang in the wake of Delhi Police filing a chargsheet in the case based on its report.

Zee News Editor also came down heavily on the Arvind Kejriwal government, which had sought strict action against Zee News and two other TV news channels for broadcasting what it called ''doctored videos'' of the February 9 incident and registered a complaint in a Delhi court.

On February 11, Delhi Police purportedly got the CD containing the raw footage of the event from Zee News. Police later registered an FIR into the JNU incident based on footage aired on the news channel.

JNU students Kanhaiya Kumar, Umar Khalid, Anirban Bhattacharya and many others were slapped with sedition charges in the wake of the incident. Kumar, Khalid and Bhattacharya were arrested and later released on bail.

The FIR registered in the case stated that a group of JNU students led by Kumar, Khalid and Bhattacharya had allegedly raised anti-India and pro-Pakistan slogans in the university campus on the evening of February 9.

After receiving the “raw footage”, the Special Cell had sent it along with the camera used to shoot the video, the memory card, a CD containing the clip, wires and other equipment to the CFSL.

The CBI laboratory sent a report on June 8, saying the raw footage was authentic.

In its final report, the Central Forensic Science Laboratory (CFSL), CBI, had stated that the raw video footage of the February 9, 2016 incident on JNU campus aired on Zee News was “authentic”.

Delhi's Patiala House Court will take up the chargesheet filed by Delhi Police for consideration on Tuesday.

The chargesheet has been filed under various sections of Indian Penal Code (IPC) including 124A (sedition), 323 (voluntarily causing hurt), 465 (forgery), 471 (using as genuine, forged document), 143 (punishment for unlawful assembly), 149 (unlawful assembly with common object), 147(rioting), and 120B (criminal conspiracy).