First high-speed Mumbai-Goa Tejas Express flagged off: All you need to know

The much-awaited high speed, air-conditioned Tejas Express, which boasts of several ultra modern facilities onboard like LED TV and tea/coffee vending machine was flagged off from Mumbai for Goa on Monday. 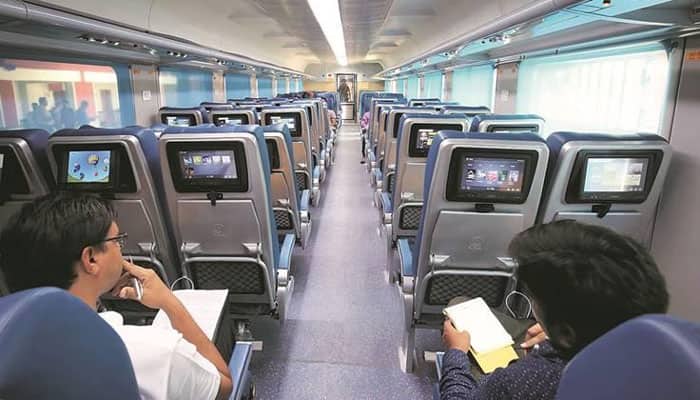 New Delhi: The much-awaited high speed, air-conditioned Tejas Express, which boasts of several ultra modern facilities onboard like LED TV and tea/coffee vending machine was flagged off from Mumbai for Goa on Monday.

Railway Minister Suresh Prabhu flagged off  Mumbai CST-Karmali Tejas Superfast as Inaugural Special from Mumbai CST on 22/05/2017 (Monday) at 15.25 hrs via Video conferencing from Swami Narayan Sabhagruh, Dadar. The train will reach Karmali at 00:35 hrs on next day.

Since the train is equipped with better facilities, the fare is slightly higher as compared to normal mail/express service. There are comfortable seating arrangements and each seat has LED TV with touch control system and call bell facilities.

Manufactured at the Rail Coach Factory in Kapurthala, the coaches will have automatic entrance door, a first in non- suburban train in Indian Railways.

There are tea and coffee vending machines and snack tables at each coach as catering facility for passengers in the new designed coaches.

Promised in the budget, Tejas Express will also be pressed into service in Delhi-Chandigarh and Delhi-Lucknow sectors, according to the railways.

'VAT on petroleum products to continue, to be decided by GST Council'