India’s remarkable jump has also been witnessed on the Global Innovation Index. In the past 4 years, India’s rank in the GII has improved from the 81st rank in 2015 to the present 52nd rank in GII 2019 report. 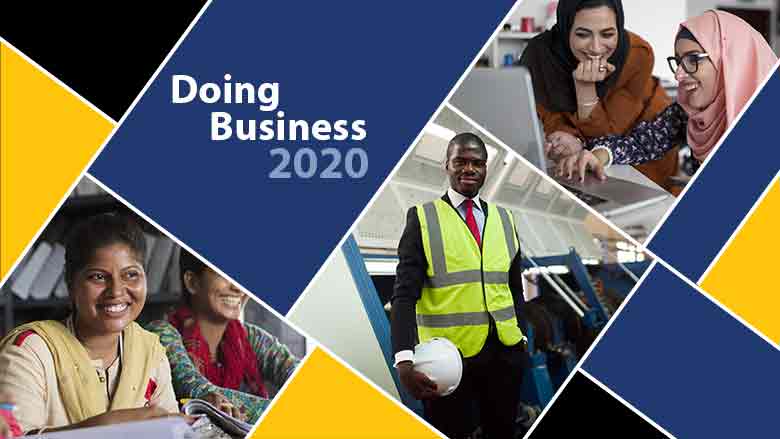 New Delhi: In the World Bank’s Ease of Doing Business Report 2020, India has made a remarkable jump ranking 63rd among 190 countries. It has improved by 14 ranks from its rank of 77 in 2019. India has improved its rank in 7 out of 10 indicators and has moved closer to international best practices. The 2020 edition of the report acknowledges India as one of the top 10 improvers, the third time in a row, with an improvement of 67 ranks in 3 years, said a government statement.

The nation has also taken the highest jump by any large country since 2011.

According to the statement, India’s remarkable jump has also been witnessed on the Global Innovation Index. In the past 4 years, India’s rank in the GII has improved from the 81st rank in 2015 to the present 52nd rank in GII 2019 report.

It has become the first developing country to launch the Global Innovation Index (GII) in association with the World Intellectual Property Organisation (WIPO) and the Confederation of India (CII). In order to promote innovation the following measures have been taken:

1. Final Patent (Amendment) Rules, 2019 - published on 17th September 2019 amending The Patents Rules, 2003 has led to a significant simplification of rules, especially for startups and MSMEs.

2. The Patent (Second Amendment) Rules, 2019 published to reduce fees for small entity/MSMEs for processing of patent applications under various sections of the Patents Act, 1970 will incentivise MSMEs to file for more parents.

The Department of Commerce has undertaken various measures to promote export.

Export Credit Guarantee Corporation (ECGC) has introduced a new Export Credit Insurance Scheme (ECIS) called ‘NIRVIK’ for exporters in which increased insurance cover for export credit has been extended by banks from existing average of 60% to 90% for both Principal and Interest.

Accounts with limits below Rs 80 crore, the premium rates will be moderated to 0.60 per annum and for those exceeding Rs 80 crore, it will be 0.72 per annum for the same enhanced cover. It is expected that the initiative will cost about Rs 1,700 cr per annum. It will provide comfort to banks, bring down the cost of credit due to capital relief, less provision requirement and liquidity due to quick settlement of claims and will ensure timely and adequate working capital and relief to MSMEs, the statement said.

To enhance ease of doing business, Deemed Export drawback has been allowed on All Industry Rate of drawback schedule.

An online portal for filing applications under the ‘Transport and Marketing Assistance (TMA)' scheme for Specified Agriculture Products has been launched.

A database has been prepared by ECGC for all pending claims and online access on the status of claims has been provided. This will be a critical tool for providing information access to exporters.

The online “Origin Management System” gives a single access point for all exporters, for all Free Trade Agreements (FTAs) Preferential Trade Agreements (PTAs) and for all agencies. India has 15 FTAs/PTAs and 7 lakh ‘Certificates of Origin’ are issued annually. The platform will be made live for FTAs as per the concurrence of the concerned partner countries. This process is electronic, paperless and transparent with real-time tracking of FTA utilisation at the product level and country level. It will also lead to reduced transaction cost and time.

Scheme for Remission of Duties or Taxes on Export Product (RoDTEP) formulated to replace existing merchandise Exports from India (MEIS) scheme. This will be a WTO compliant scheme for the promotion of exports. Textiles and all other sectors which currently enjoy incentives up to 2% over MEIS will transit into RODTEP from 1.1.2020. RoDTEP will span all sectors and the revenue foregone will be about Rs 50,000 crore.

A total of 21,778 startups are now recognised under the Startup India Initiative, of which 2,912 startups have been recognised since 1st June 2019.

The Startup India Hub has 3,42,614 registered users of which 21,540 users have been added since 1st June 2019. With the amendment in Section 54GB of Income Tax Act on August 1st, 2019 the condition of minimum holding of 50% of share capital or voting rights in the startup has been relaxed to 25%.

Infusion of funds for Export Support

A capital of Rs 389 crore has been infused into Export Credit Guarantee Corporation (ECGC) on 21st June 2019. This will provide extra support to exports to emerging and challenging markets like Africa, CIS, Latin America, and Asian countries.

Boost to Gem and Jewellery exporters by resolution of various issues like removal of the requirement of paying IGST on re-import of goods which were exported earlier for exhibition purpose/consignment basis. Allowing partial discharge of bonds executed by nominated agencies/banks for the import of gold to be supplied to jewellery exporters, thereby enabling nominated agencies/banks to release bank guarantee of jewellery exporters who have fulfilled their export obligation has helped in the release of blocked working capital.

The National Logistics Policy is being prepared with the aim to bring down total logistics cost from 14% to 9% of the country's GDP. The policy aims to boost business competitiveness, drive economic growth and make India a global logistics hub.

The Multi-Modal Transportation of Goods Bill, 2019 has been finalised for approval. This aims at facilitating the movement of goods for exports, imports and domestic trade. It will help to fix accountability and liabilities for violation of its provisions.

The Agriculture Export Policy has been approved with an outlay of Rs. 206 Crores for 2019-20. In order to establish linkage between FPOs and the exporters, a portal has been created by Agricultural & Processed Food Products Export Development Authority (APEDA). About 740 Farmers Producer Organisation (FPO) has been registered under Farmers Connect Portal.

Budgetary Support under GST Regime to the units located in Jammu & Kashmir, Himachal Pradesh, Uttarakhand and North Eastern States including Sikkim has been made. Rs. 1,700 crore has been authorised by Department for Promotion of Industry and Internal Trade (DPIIT) to Central Board of Indirect Taxes & Customs (CBIC) for disbursement to eligible industrial units. Rs. 1,692 crore already been disbursed by CBIC under the Scheme till 15th November 2019. During the last 6 months, Rs. 86 crore was disbursed to 420 industrial units under the Special Package to the Himalayan States.

In order to ensure the interests of the Indian industry and farmers in FTAsIndia successfully laid out its stand in Regional Comprehensive Economic Partnership (RCEP)India’s key concerns were not addressed. India took a strong stance to protect the interest of domestic producers. This decision will help vulnerable sectors including farmers and the dairy sector as well as small manufacturers, who would have been threatened by RCEP rules.

India has also secured an agreement for review of ASEAN FTA (ASEAN-India Free Trade Area-AIFTA) after repeated follow-up. This will help in removing rules that affect Indian producers and exporters and will also promote Indian exports and Make in India.

The SIMS will facilitate the Steel Industry by providing advance information about steel imports to all stakeholders including Government, steel industry and steel importers for effective policy interventions. Importers of specified steel products will register in advance on the web portal of SIMS providing the necessary information. The registration will be online and automatic and no human intervention is required. SIMS has been notified with effect from 1st November 2019.

The completion of the negotiation of India-Mauritius Comprehensive Economic Cooperation and Partnership Agreement (CECPA) will enable trade promotion between the two countries.

The merger of Council of Trade and Development and Board of Trade: providing a common platform for addressing stakeholder concerns

This common platform, comprising of representatives from industry, export promotion councils, Government of India and State Governments and representatives from the Banking and Finance Sector is playing a critical role in addressing export-related concerns, with a focus on addressing these on a priority basis. The first meeting of this common platform took place on the 6th of June, 2019.

SEZ (Amendment) Bill 2019 became the first legislation of the newly formed Government to be passed by the Parliament. This will enable any entity to set up a unit in SEZs, including Trusts. This will help boost investments and create new export and job opportunities.

Investments of USD 1.1 billion have been proposed since the ordinance was promulgated earlier this year.

Better facilities for employees: SEZ units allowed to create facilities/amenities like crèche, gymnasium, cafeteria for their exclusive use as a measure towards ease of doing business.

100% FDI has been allowed under the automatic route for coal mining activities including associated processing infrastructure.

100% FDI under automatic route has also been allowed in contract manufacturing.

Providing more flexibility and ease of operations to Single Brand Retail Trading (SBRT) entities. All procurements made from India shall be counted towards local sourcing, whether goods are sold in India or exported. Online retail trading permitted upto two years prior to opening brick and mortar stores.

Boost to Make in India in government procurement

Progressive amendments have been made to favour local suppliers likeprocurement upto Rs 50 lakhs has been exclusively reserved for local suppliers (except in certain cases). Only local suppliers eligible to bid for procurement of items, where there is sufficient local capacity and local competition, irrespective of purchase value.

Amendment to National Institute of Design (NID) Act was moved for consideration and passing in the Rajya Sabha on 6th August 2019 to confer Institute of National Importance status to the four new NIDs Rajya Sabha has passed the Bill. It will be introduced in the forthcoming session of the Lok Sabha for consideration and passing. The four new NIDs at Andhra Pradesh, Madhya Pradesh, Assam and Haryana to be declared as Institutions of National Importance on the lines of NID, Ahmedabad.NIDs, Madhya Pradesh and NID, Assam have commenced the academic session of 2019-20 from 29th July 2019.

A long-pending demand of traders has been fulfilled with the constitution of the Board to understand the issues and problems faced by traders and employees in their day to day business operations and for their welfare. The Board shall have a number of representatives from Traders' Associations as members.