There are junctures in the film where it may seem that writer-director Pan Nalin has bitten off more than he can chew. 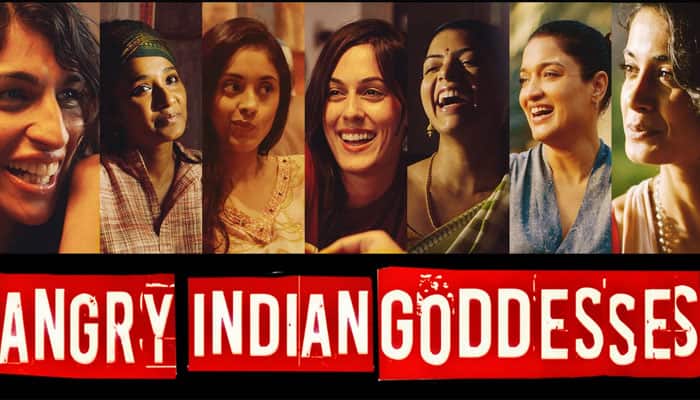 A zesty and occasionally zany tale of seven emancipated women fighting to protect their hard-earned freedom, Angry Indian Goddesses has one striking feature, among many others: it has no major male character.

That, however, does not mean that it portrays a world without men. The men lurk in the backdrop with their messed-up mindsets, posing serious challenges to the girls as they navigate a minefield of gender prejudices.

There are junctures in the film where it may seem that writer-director Pan Nalin has bitten off more than he can chew.

But thanks to a freewheeling storytelling style and a clutch of lively, spontaneous performances by the ensemble all-female cast, the film's overt social messaging does not weigh it down.

But it brings its multiple concerns to the table in a manner that, for the most part, steers clear of the overly grim and sombre.

A bunch of girls gather in the Goa house of a female shutterbug who has got away from the madding big city crowd in order to give her art some space to breathe.

She tells her friends that she is days away from marriage, but she refuses to divulge the identity of the betrothed. In this cosy sinecure, the women let their hair down as they gear up for the impending wedding. Shutting the world out, they banter, bicker and bond with each other.

Each one of them none is free from her own share of failings is in need of a break. But can they keep the environs from impinging upon their idyll.

Late in the film, matters take a sinister turn the social order is challenged, a hidden gun is discovered, and a character goes missing.

The girls, shaken and shattered, do not give up the fight. The tension-filled finale is both unfussy and effective. Angry Indian Goddesses is an entertaining and though-provoking feminist film written and directed by a man.

It is informed with deep empathy and admiration for women who live on their own terms and give as good as they get.

For the actresses in the cast, the film offers a gilt-edged opportunity to go all out. They do just that. They plunge headlong into their roles and the director ensures that all of them get an equal share of the footage.

Sarah Jane Dias as the winsome host who springs a surprise on her guests and Tannishtha Chatterjee in the key role of an activist who triggers the film's principal conflict stand out. Also noteworthy are the performances by Anushka Manchanda and Rajshri Deshpande.

Manchanda, a real-life musician who was a member of the all-girl band Viva, plays a rocker grappling with career setbacks and bouts of depression. Deshpande, a theatre professional, is cast as the tough-cookie housemaid who has her own score to settle with the world.

Angry Indian Goddesses blends a breezy storyline with a plethora of topical issues without letting one or the other gain precedence.

The balance the film achieves is admirable even as it ticks all the right boxes.
One of the most exciting films of the year by far, Angry Indian Goddesses deserves the support of all those who like their cinema to look for fresh thematic pastures and narrative approaches.