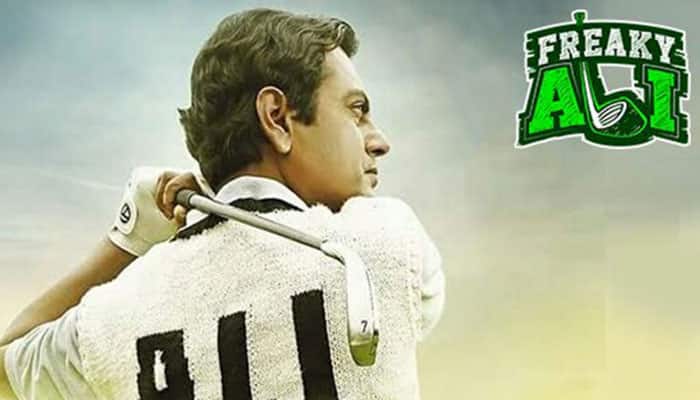 Not even Nawazuddin can save this utterly puerile comedy with more holes in the plot than the golf course where a large chunk of the baggy uneven plot unfolds.

The film is based on a terrific premise. A golf novice from the working class becomes an unwitting champ of the game and even wins the arrogant adversary's girl in the process.

This is as far as the storyline goes. The rest of the 2-hour film is trite-topping filled with unwanted characters and loosely hung episodes with cheesy lines taken straight from episodes of Comedy Circus.

Sample this: Ali (Nawazuddin) and his faithful companion Maqsood (Arbaaz Khan) are lolling at the golf course when someone asks what they want.

"A plot of land in Bandra," says Nawaz sarcastically.

There isn't much here to cling on to for relief , unless you want to laugh at the chawl fast-bowler with a skin-pigmentation ailment being called "India's Brett Lee". Earlier an overweight little boy is compared to, among other things, a Nano car. And a spirited woman claiming to be of royal antecedent is roughed up by Nawaz and Arbaaz like Munnabhai and Circuit gone awry.

If only he knew.

Worrisomely, the dialogues sound like episodes of comedy "roast" wherein the joke, you fear, is on us. Sohail Khan's treatment of the rags to riches plot is so 1980s, we can almost smell the mothballs.

Seema Biswas as Nawaz's mother strikes all the trite chords,right from adopting a Muslim child into her Hindu home, to slapping her son's scummy friend (Arbaaz loses moral ground) to taking on the mafia don (Jackie Shroff, making a last-minute appearance as if the screenwriters decided to include him as a laughter-thought), Biswas is Nirupa Roy and Kirron Kher reincarnated.

'Achche din' have certainly not arrived for Seema Biswas. In one degrading episode, the chawl's resident Dirty Old Man nudges her suggestively hinting that Ali is their son.

Seeds of discontent and disorientation are sown in uncomfortable alcoves all across the film. The narration moves roughly and restlessly from one episode to another. The editing is abysmally patchy. The performances, barring Asif Basra as Ali's mentor and caddy, are uneven. Nawaz tries hard to appear casual in his golfing avatar. But the effort of embracing on-field elitism cracks open his self-worth. At best Nawaz's performance is mildly likeable. At worst, it is just plain uninspired.

Jas Arora as Nawaz's villainous adversary on the golf field tries every trick in the book to look evil. But he is more a cartoonish figure. Amy Jackson seems content playing the plaything. She's first Jas Arora's right-hand woman, then Ali's. All the while she is a mere prop.

Amy needn't worry. No one is likely to take this freaky film seriously.

Shah Rukh Khan to do a cameo in Sonu Sood's 'Tutak Tutak Tutiya'?