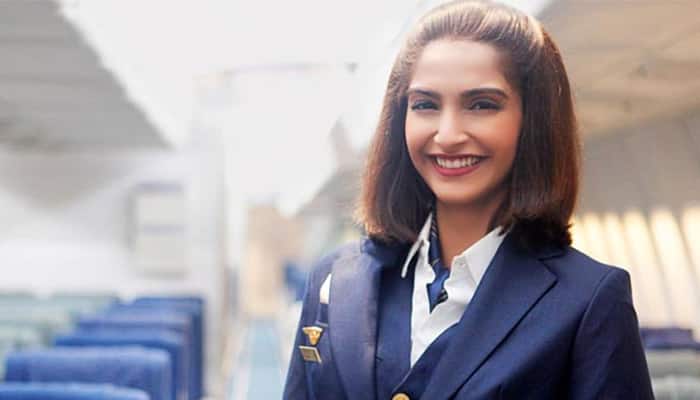 Fasten your seat-belts for Neerja Bhanot's biographical movie 'Neerja' has hit the screens and surprised the audience with an impressive mix of performance, script and screenplay.

For those who thought 'Neerja' is a slice from the history book, well it isn't.  There's no more history classes in this Ram Madhvani's brilliant biopic than the touching, heart-wrenching tale of a 23-year old girl's bravery. Revolving around the mind-boggling hijack of Pan Am Flight 73 that happened in 1986 in Karachi, this Sonam Kapoor, Shabana Azmi starrer takes off a smooth ride, right off the bat in it premises and overcomes the turbulence that comes along, swiftly and almost impeccably.

When Frankfurt-bound airplane Pan Am Flight 73 is hounded and hijacked by a bunch of Libyan hijackers in Karachi in 1986, lead air hostess Neerja Bhanot (Sonam Kapoor) from Punjab must do what she must do in order to keep the surroundings tamed in the horrifying situation.

It's not hard-core gallantry that she shows at first which makes us love her, but her dedication towards her job of an air-hostess, perseverance amidst the tense ambiance, which makes her heroic.

She is the hero here, or rather the pilot – who decides the fate of most of the hijacked passengers – and rescues them from the terror. Once hijacked, we are shown zigzags of what happens inside the plane, and outside – in Neerja's home, inside the lonely boundaries of her love interest's (Shekhar Ravjiani) car who is quietly listening to the radio and sobbing.

There is a riveting atmosphere that Ram maintains throughout in this airplane-bound thriller. Saiwyn Quadras's screenplay works wonders here. One would find it easy to get tired of the same faces and the plane constantly, but he mastered this one by avoiding the cliches and keeping it free from all red-herrings.

'Neerja' will be remembered for its story, it will stay in the hearts of all movie-goers for its ingenuity. Call it a biographical sketch, but this isn't a tale of a terrorist attack. This is about a twenty-something ambitious woman, who is brave and poised in one of the most disturbing situations one could face in life. It is about a mother who wants nothing more than her daughter to be safe, and also of a father (Yogendra Tiku) who shows the utmost determination in this shocking turn of events.

In one of the last scenes, a teary Shabana Azmi recalls her daughter's final words to her. She tells us about how most brothers in the family are told to take care of their sisters, often ignoring the mountain of courage a woman can possess.

Here's Sonam Kapoor's, for once in a long time, beautifully portrayed biopic of Neerja Bhanot. Board the flight, for it's safe, simply for Neerja – even if the plane goes down, you know you will remember this skinny, twenty-something undaunted air hostess for her never-ending commitment and kindness towards the passengers.

'Neerja' is definitely a white-knuckle ride, take it if you have the courage for it.