The exposure of the Arctic ecosystem to persistent organic pollutants (POPs) is toxic to the health of endangered polar bears, researchers warn. 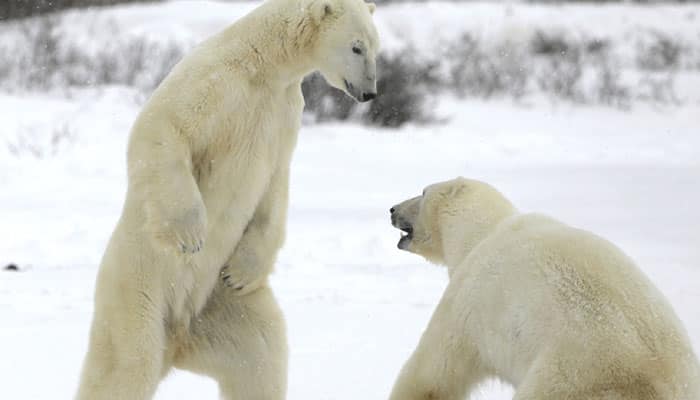 London: The exposure of the Arctic ecosystem to persistent organic pollutants (POPs) is toxic to the health of endangered polar bears, researchers warn.

POPs are chemicals that remain intact in the environment for long periods, travel long distances, accumulate in living organisms and are capable to transport via air, water, migratory species and technical matrices such as products and wastes.

The findings indicates a very high potential of POPs' toxic effects, particularly for a top predator in the Arctic food web, such as the polar bear and its offspring.

"This work is the first attempt to quantify the overall risk of POPs for the Arctic ecosystem and to define a ranking in order to highlight the most dangerous chemicals in the mixture," said Sara Villa from the University of Milan in Italy.

Most POPs may have endocrine-disrupting effects, as a result of which the growth and development of bear offspring may be endangered, the researchers said.

Besides, the most important complex groups of POPs (PCBs, polychlorinated dibenzodioxins/dibenzofurans [PCDD/Fs]) some individual chemicals (or small groups), such as chlordanes, aldrin, and dieldrin, also reach a very high hazard quotient level.

In particular, for bear cubs some hazard quotient values are close to or even higher than 100.

However, in comparison with the 1980s, a decrease in risk from legacy POPs has been evident for bear cubs, mainly because of international control measures.

But, the composition of POPs substantially changes and the contribution of new POPs (particularly perfluorooctane sulfonate) is increasing.

"The results demonstrate that international control measures are effective at reducing the risk to ecosystems. Nevertheless, it is fundamental to continuously implement the control of new and emerging contaminants," added Marco Vighi from the University of Milano-Bicocca in Italy.

The study was published in the journal Environmental Toxicology and Chemistry.