While Nicolo Zaniolo led the hosts with a brace on Tuesday, Adrian Lopez`s goal for Porto may prove decisive in deciding which of the clubs advances to the quarterfinals. 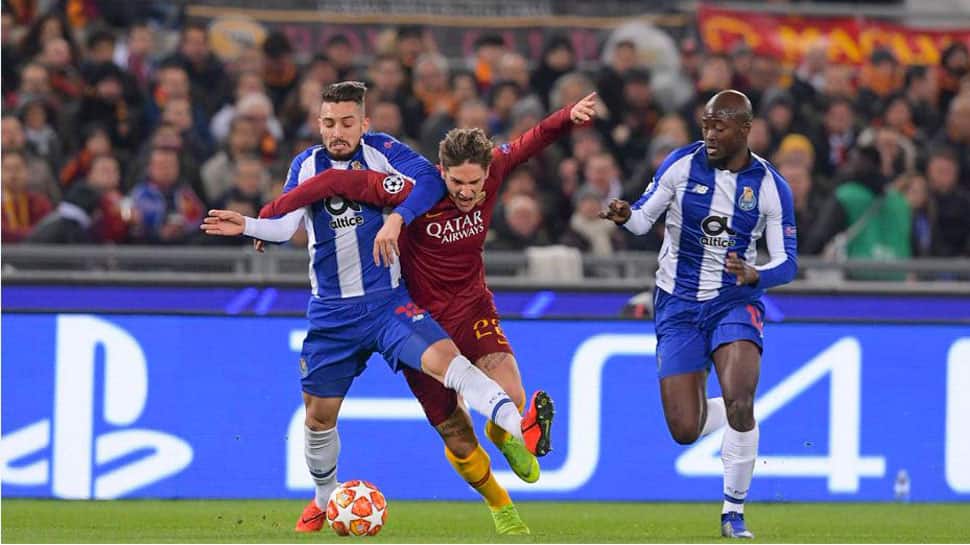 AS Roma defeated Porto 2-1 in the first leg of the Champions League round-of-16 tie, but the away goal gives hope to the Portuguese side looking ahead to next month`s decisive contest on their home ground.

While Nicolo Zaniolo led the hosts with a brace on Tuesday, Adrian Lopez`s goal for Porto may prove decisive in deciding which of the clubs advances to the quarterfinals, Efe news reported.

Before the start, the 55,000 spectators on the stands at Rome`s Stadio Olimpico came to their feet for a sustained ovation in honour of Emiliano Sala, the 28-year-old Argentine soccer player who died recently in a plane crash.

That emotional moment gave way to a first half that was dominated by tactics and defence.

Roma went with a 4-3-3 formation and forward Zaniolo dropped back to help out midfielders Lorenzo Pellegrini, Daniele De Rossi and Bryan Cristante on defence whenever Porto had possession.

For Porto, Eder Militao - said to be on the radar of Real Madrid - held down the right flank on the back line, defusing the threat from Roma`s speedy Stefan El Shaarawy.

The only real threat to either goal was a shot in the 38th minute by Edin Dzeko that bounced off the post to the relief of Porto goalkeeper Iker Casillas, who at 37 is the first player to reach the Champions knockout stage on 19 different occasions.

The pace quickened notably in the second half and most of the action was in the Porto end.

Casillas made two stops against Pellegrini before finally conceding in the 70th minute to Nicolo Zaniolo, who received the ball in the area and beat the keeper with a crossing shot.

Dazed after the goal, Porto gave up another just six minutes later and again it was the work of Zaniolo who converted with Casillas out of position after the keeper moved towards the far post to deal with a shot by Dzeko.

Roma, which reached the semifinals in the 2017-2018 Champions League, seemed to be in control, but the euphoria lasted only until the 79th minute when Porto forward Adrian Lopez blasted the ball past home keeper Antonio Mirante to narrow the deficit to 2-1.

The visitors flew forward in pursuit of an equaliser, coming closest with a strike by Hector Herrera from 20 yards that went just outside the post.

Casillas, meanwhile, produced another great save in the final minute to keep it close when the clubs meet on March 6 in Portugal for the second leg.