The 31-year-old Poland forward grabbed his first goal with a 20th-minute penalty and added another with a superbly taken free kick five minutes after the restart. 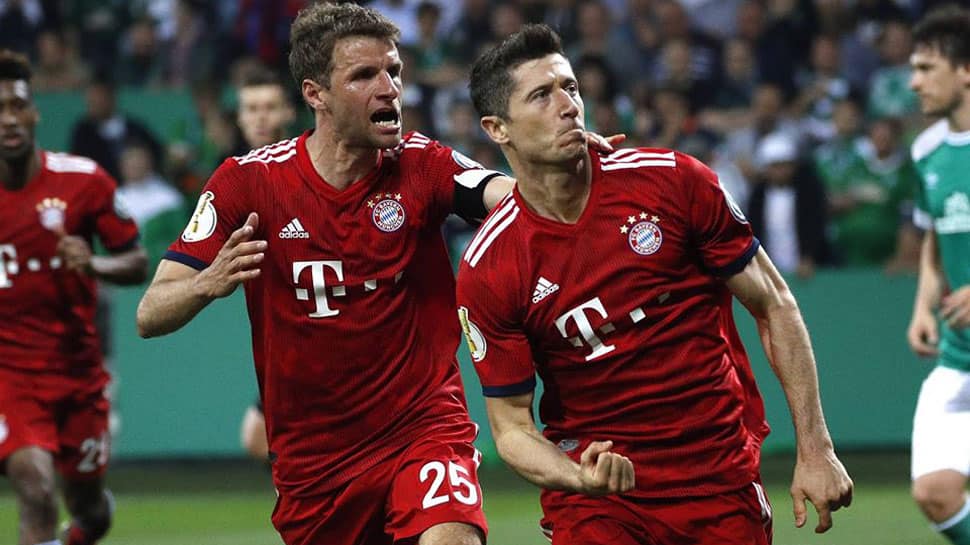 Robert Lewandowski scored a hat-trick to help champions Bayern Munich cruise to a 3-0 victory at Schalke 04 on Saturday for their first win in the Bundesliga this season.

The 31-year-old Poland forward grabbed his first goal with a 20th-minute penalty and added another with a superbly taken free kick five minutes after the restart.

He completed his ninth Bundesliga hat-trick in the 75th minute to take his season tally to five goals in two league matches.

Bayern, who stumbled to a 2-2 draw in their opener against Hertha Berlin, are on four points, two behind leaders Borussia Dortmund, who won 3-1 at Cologne on Friday.

"I can play even better. I have the potential to further improve," Lewandowski, who is close to signing a contract extension, told reporters. "You can win some matches alone but with the team you win titles."

"The Bundesliga is no easy league and that is why we constantly have to be ready. I was ready and happy to have helped the team," he said.

The striker has now converted 24 of his 27 Bundesliga penalties while also scoring 16 goals in 19 league matches against Schalke.

His second goal looked to be a wake-up call for Schalke who grabbed control of the game and were unlucky not to be awarded a penalty for a handball by Bayern`s new signing Ivan Perisic.

Their revival was shortlived, however, and Lewandowski put the game beyond them when he controlled the ball at the edge of the box before completing his hat-trick with a clinical finish.

Philippe Coutinho, Bayern`s biggest signing for the season, also came on in the second half for his first appearance on German soil after joining on loan from Barcelona.

Bayer Leverkusen scored three times in the first half to ease past hosts Fortuna Duesseldorf 3-1 and join leaders Borussia Dortmund with maximum points from their first two matches.

A sixth-minute own goal from Lewis Baker put the visitors ahead and Charles Aranguiz added another goal in the 33rd. Kevin Volland, who was also involved in the first goal, set up Karim Bellarabi for their third six minutes later.

Fortuna cut the deficit in the 82nd through Alfredo Morales.

Freiburg are also on six points after coming from a goal down to beat promoted Paderborn 3-1 while Borussia Moenchengladbach, on four points, did the same for a 3-1 victory at Mainz 05.