Salomon Rondon, Ayoze Perez and Christian Atsu all had chances on the break but could not find an equaliser for former Chelsea boss Rafael Benitez. 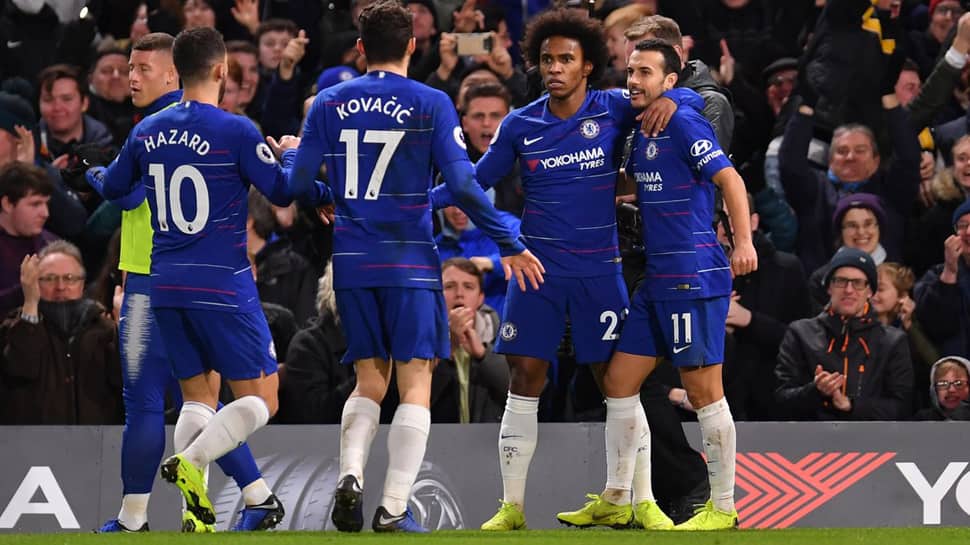 Skillful finishes from Pedro and Willian earned Chelsea a 2-1 win over battling Newcastle United in the Premier League on Saturday, keeping the London side safely in the top four.

A pinpoint lofted pass from David Luiz in the ninth minute found Pedro and the Spain forward deftly chipped the ball over Martin Dubravka into the net.

Despite Chelsea`s overwhelming possession, Newcastle enjoyed a couple of chances on the counter late in the first half and Ciaran Clark equalised from a corner in the 40th minute, squeezing his header inside Kepa Arrizabalaga`s right post.

Chelsea, though often frustrated by a mass Newcastle defence, found a way through in the 57th minute when Eden Hazard forced his way down the middle and laid off the ball to Willian who curled an exquisite shot into the top corner of Dubravka`s goal.

Newcastle, struggling in the relegation zone, lacked midfield quality, but made up for that in ambition.

Salomon Rondon, Ayoze Perez and Christian Atsu all had chances on the break but could not find an equaliser for former Chelsea boss Rafael Benitez.

"We started well but after the goal we slept for 20 minutes, so by the end of the first half we were in trouble. We were better in the second half. I’m very happy with result but we need to improve, mentally and technically."

Sarri elected to leave Bayern Munich target Callum Hudson-Odoi on the bench from the start, bringing Pedro back into the side.

The move appeared to be a masterstroke as Pedro finished Luiz’s superb long ball off brilliantly to break the deadlock.

Newcastle did not let their heads drop, though, and five minutes after Perez had missed a gilt-edged chance to level, Clark headed his third goal of the season to stun Stamford Bridge into silence.

After the break, Willian latched onto a pinpoint pass from Hazard to curl home his first league goal since the end of October.

"You could see a lot of positives with the performance but no points," Benitez said.

"We knew that they would keep the ball and we had to maximize what we did when we got the ball. We had some chances on the counter but our final pass wasn`t there."