Bayern Munich take on Borussia Dortmund for a place in the final of DFB Cup. 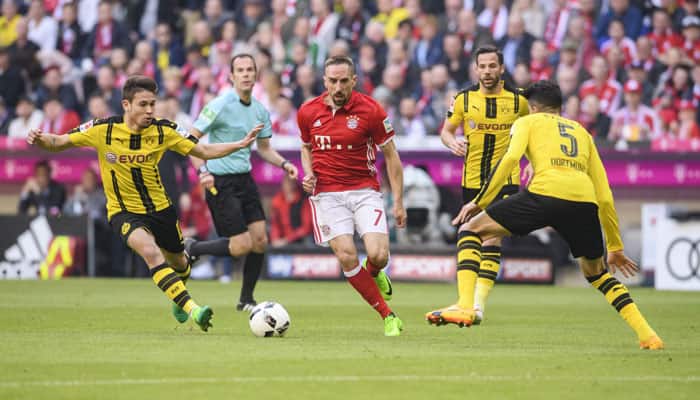 New Delhi: After being stunned in the first leg of UEFA Champions League by Real Madrid, wounded Bayern Munich are up against Borussia Dortmund in the semi-final of the German cup competition, DFB Pokal.

Winning the double or not will decide how the club and its fans judge the 2016/17 season -- one that again ended without them achieving their big dream of securing Europe's biggest crown. Bayern boss Carlo Ancelotti made no secret of his expectations saying the season could only be called good if they clinch the double, reports Xinhua news agency.

Captain Philipp Lahm tried to ease the tension by saying that winning the domestic double would make it a "very good season" and bagging only the league title would mean a good one. Considering Bayern have a top-class squad and the expectations before Ancelotti's arrival, it is clear that the double will be seen as a minimum goal.

If he misses out, Ancelotti will be confronted with criticism about his tactical approach and his future plans. Rumours say there is a hefty debate within the club as to whether Ancelotti is the best man to take Bayern forward especially as they intend to concentrate more on developing youngsters. Up until now, Ancelotti has mainly relied on experienced players and has neglected younger talent.

According to several German media reports, Bayern's management is considering to lure Hoffenheim coach Julian Nagelsmann in the near future as the 29-year-old is regarded as one of the biggest coaching talents in Germany for the last decade.

Here is all you need to know about today's match:-

When and where will DFB Pokal semi-final match between Bayern Munich vs Borussia Dortmund match played?

Bayern Munich take on Borussia Dortmund at the Allianz Arena on Thursday, April 27.

Where to watch the match telecast in India?

The match will be broadcast live on Ten 2 and Ten 1 HD.

What time does the Bayern Munich vs Borussia Dortmund match start?

How to watch the live streaming of the DFB Cup semi-final betweeen Bayern Munich and Borussia Dortmund?

The live streaming will be available on tensports.com and Sony LIV app.