The English supporters had lined up outside Wembley hoping that their side would win and there would be a big party, but since that did not happen – they were agitated. 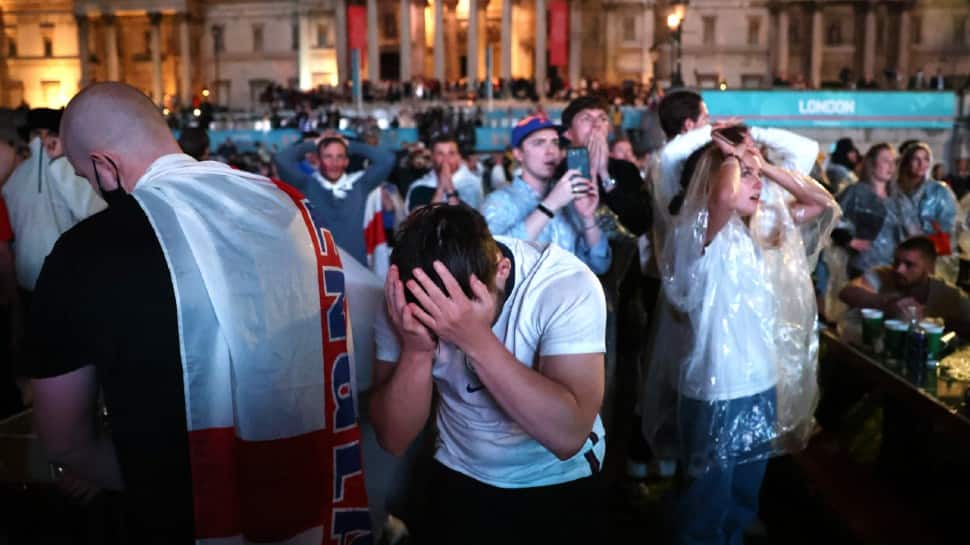 Disappointed England fans after their loss to Italy in the UEFA Euro 2020 final at Wembley. (Photo: Reuters)
Share:
Written By:

There was mayhem outside the iconic Wembley Stadium on Sunday (July 11) after England lost to Italy in the UEFA Euro 2020 final via penalties. The English supporters could not digest the loss and they unnecessarily attacked the Italian fans outside the stadium. The English fans not only hit their Italian counterparts but there was a lot of racial abuse and stomping of the Italian national flag as well.

As attempts to set the cloth alight failed, another fan could be seen spitting on the Italian flag whilst another stepped on it repeatedly. Here is the footage of what transpired…

england fans are sore racist violent losers that need to be punished by fifa. we can't just sit & watch them physically attack italy fans at wembley then hurl racial insults at rashford, sancho & saka. fifa needs to act. we need to create an environment safe for players & fans. pic.twitter.com/gJOv5xT2dt

The English supporters had lined up outside Wembley hoping that their side would win and there would be a big party, but since that did not happen – they were agitated. Earlier, England got off to a dream start when Luke Shaw found the back of the net in the second minute of the game. Italy, who dominated ball possession, found the equaliser in the 67th-minute when Leonardo Bonucci scored.

But in the penalties, Italy was easily the better team as England missed three and there was no coming back from there.

absolutely embarrassing from england fans, even more embarrassing now we lost. GROWN ASS MEN vandalising the streets of London just because of people passing a ball around for 90 minutes. pic.twitter.com/dfhiWnY3Gc

Meanwhile, ugly scenes broke out in London on Sunday as hundreds of fans without tickets tried to enter the Wembley Stadium to witness the Euro 2020 final between Italy and England. The videos of fans creating ruckus and battling with stewards and police to go past the lines surfaced on social media.

Despite the chaos created on the streets, the Wembly Stadium spokesperson, in a press statement, insisted that there was no breach of stadium security.

“We are dealing with an incident that occurred at the outer security perimeter area of the stadium, with support from police,” a spokesperson for Wembley Stadium was quoted as saying as per media reports.