Euro 2020 qualifier: Portugal rekindle hopes with a 4-2 win in Serbia

The victory lifted the Portuguese to second place in the group on five points from three games, eight behind runaway leaders Ukraine who have 13 from five matches after their 3-0 win in Lithuania earlier on Saturday. 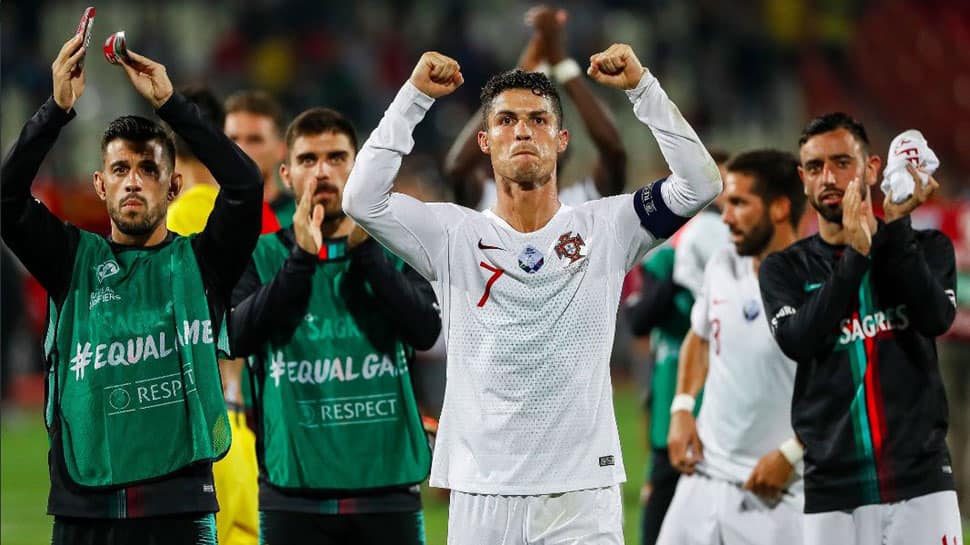 European champions Portugal got their Euro 2020 qualifying campaign back on track with goals from William Carvalho, Goncalo Guedes, Cristiano Ronaldo and Bernardo Silva helping them to a pulsating 4-2 Group B victory in Serbia on Saturday.

The victory lifted the Portuguese to second place in the group on five points from three games, eight behind runaway leaders Ukraine who have 13 from five matches after their 3-0 win in Lithuania earlier on Saturday.

Third-placed Luxembourg and Serbia in fourth both have four points from as many games while Lithuania are bottom with one point from four matches.

Coach Fernando Santos, who steered Portugal to the Euro 2016 title in France and this year`s triumph in the inaugural Nations League, was pleased with his team`s performance.

"We showed a lot of creativity and attacking intent in a solid performance required to beat a very good Serbia side," Santos told reporters.

"Getting the opening goal just before halftime was vital and in the second half, we controlled the game. We stifled their excellent midfield and deserved the win."

"This win should boost our confidence ahead of Tuesday`s visit to Lithuania and nothing less than a win will do because it`s a complicated group."

His counterpart Ljubisa Tumbakovic, who replaced Mladen Krstajic on July 1 three weeks after he was sacked by Montenegro, conceded he had endured a sour debut as Serbia coach.

"We lost to a majestic team full of world-class players," said the 67-year old from Belgrade.

"We lacked the final pass in the first half and it didn`t help that we fell behind just before the break. As ever in Serbian football, we were vulnerable defensively and that undermines every other department."

Portugal dominated the opening half and Carvalho fired them ahead in the 42nd minute when he poked the ball into an empty net from three metres after Serbia keeper Marko Dmitrovic spilled a Bruno Fernandes cross from the right.

Cristiano Ronaldo, looking subdued in the opening half and given a hostile reception at Red Star stadium as Serbian fans jeered him every time he touched the ball, twice came close early in the second half.

He fired inches wide from the edge of the penalty area after cutting in from the left and then curled a free-kick narrowly off target before Guedes doubled Portugal`s lead with a fine individual effort.

The forward capped a flowing move as he sidestepped a defender and rifled in an unstoppable shot past Dmitrovic into the far corner from 12 metres to silence the raucous home crowd.

Center-back Nikola Milenkovic pulled one back for Serbia in the 68th minute, heading a Dusan Tadic corner past keeper Rui Patricio, who was two minutes later forced to tip a fierce Adem Ljajic shot from 20 metres over the bar.

Taunted by chants of "Messi" from Serbia`s die-hard fans, Ronaldo demonstrated his class in the 80th minute when he took a Bernardo Silva pass in his stride and coolly dinked the ball over the advancing Dmitrovic.

Serbia refused to roll over as Aleksandar Mitrovic drove a shot from inside the penalty area into the roof of the net after a defensive blunder in the 85th minute but Silva sealed the contest with a clinical finish barely 60 seconds later.