After draws with Leicester at home and West Ham in London on Monday, Liverpool had seen their lead over City dissipate so this was a timely win. 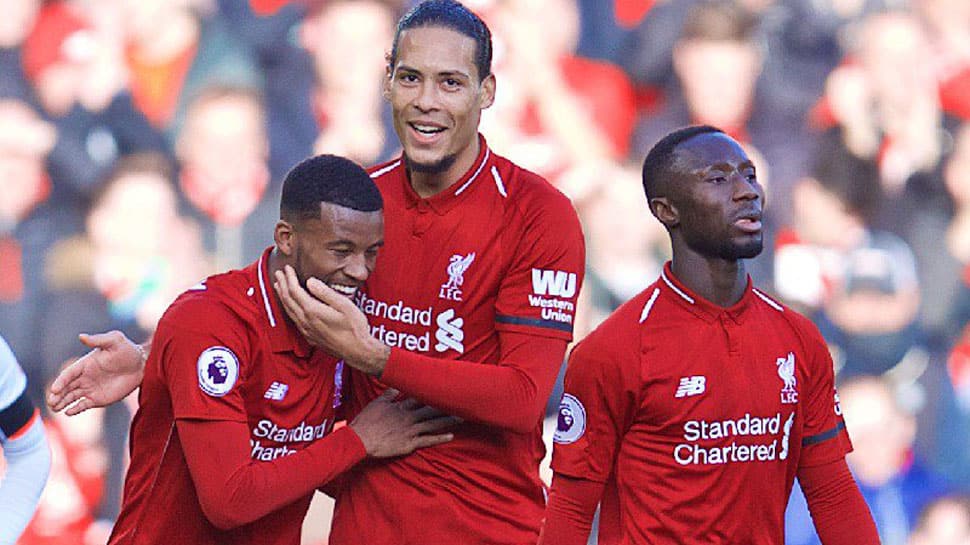 Dutch midfielder Georginio Wijnaldum is rarely the headline grabber for Liverpool but a special goal and an outstanding all-round performance in Saturday`s 3-0 win over Bournemouth showed his value to Jurgen Klopp`s team.

Wijnaldum`s display of pressing, passing and one sublime finish, was all the more remarkable given the state he had been in ahead of the game.

"He didn`t sleep in the team hotel last night. He had diarrhoea and vomiting two nights earlier so he couldn`t come to the team hotel," said Klopp.

"He had pretty much everything you don’t want to have two nights before a game. Then he said, after a couple of hours sleep, I feel good, I can play," added the German.

Wijnaldum`s goal was a perfectly weighted lob over Cherries`s keeper Artur Boruc after the Dutchman had superbly brought down a lofted pass from left-back Andy Robertson.

It showed another side of Wijnaldum`s game and that for all his aggression and work-rate in midfield, he also possesses a deft touch.

Klopp though joked that he was worried he might pass on his illness to his team mates in the celebration.

"I was concerned after he scored a goal that everyone gives him a hug," said Klopp, who added Wijnaldum`s attitude was typical of his squad, who lead Manchester City by three points ahead of their title rivals` match with Chelsea on Sunday.

"The character and mentality of these boys is the only reason we are where we are. We can use always the character and attitude of the boys. We can win football games and we will win. How many? We will see," said Klopp.

The German was also quick to set the record straight about skipper James Milner`s performance at West Ham on Monday, saying he had shown the same spirit as Wijnaldum and played while ill.

"It is the same like Milly’s character. I heard some were very critical of Milly’s performance last week, which is a joke," he said.

After draws with Leicester at home and West Ham in London on Monday, Liverpool had seen their lead over City dissipate so this was a timely win.

"We have high expectations and today we won in an impressive manner - we had some outstanding performances on the pitch. Goal number three (from Mohamed Salah) was world-class," he said.

"We wanted to show a reaction. It`s our job not only to come through but to really perform and convince."