La Liga: Real Madrid get 3rd win in a row with win at Espanyol as Bale returns

Third-placed Real usually fare well on trips to Espanyol and they got off to a flying start on this visit when Karim Benzema scored in the fourth minute on the rebound, beating former Real goalkeeper Diego Lopez who had parried a shot from Luka Modric. 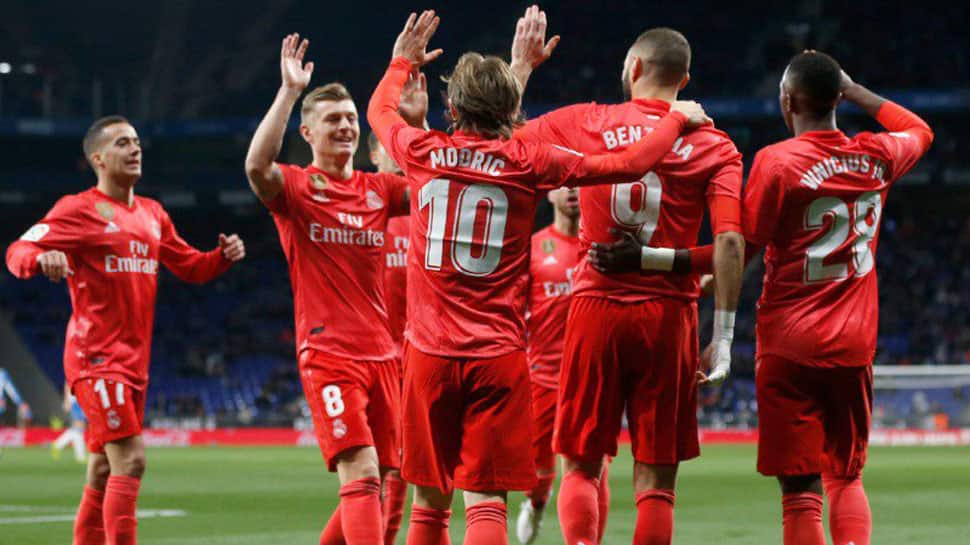 Gareth Bale marked his return from injury with a goal as Real Madrid continued their impressive turnaround in results by thrashing Espanyol 4-2 away on Sunday, racking up a third consecutive win in La Liga.

Third-placed Real usually fare well on trips to Espanyol and they got off to a flying start on this visit when Karim Benzema scored in the fourth minute on the rebound, beating former Real goalkeeper Diego Lopez who had parried a shot from Luka Modric.

Captain Sergio Ramos headed home a cross from Modric in the 15th minute to score his fourth goal in January and put Madrid further at ease, although Espanyol pulled themselves back into contention with a strike from Leo Baptistao 10 minutes later.

Santiago Solari`s side restored their two-goal advantage when Benzema struck again just before halftime, playing a one-two with Vinicius Jr and curling the ball into the bottom corner after a delightful backheel from the Brazilian teenager.

Madrid had a setback at the end of the half as Ramos was forced off with an injury and was unable to continue, although Solari said the defender only had a knock and would not be sidelined for long.

Bale came off the bench midway through the second half after more than three weeks out injured and the Wales forward scored within three minutes of his return, collecting a pass and escaping from two defenders with a drag of the heel before smashing into the net.

Madrid were reduced to 10 men later in the game when Raphael Varane was given a straight red card for blocking a goalscoring chance with a foul, and Espanyol pulled back another goal with a wonderful strike from Venezuelan Roberto Rosales.

"We played with great intensity and pace and we were always looking to score, and we had the game under control until the sending-off," Solari told reporters after a fifth win from six games in all competitions.

Madrid are third on 39 points, 10 behind leaders Barcelona who beat Girona 2-0 earlier on Sunday, while Espanyol dropped to 15th.

"We`ve scored four goals but the most important thing is how we played. Our hard work is coming off," added Madrid winger Lucas Vazquez.

"The key thing for us has been our intensity. When we play with this much intensity, we are an entirely different team."