Jesus launched himself into the air to connect decisively in the third minute but City never hit top gear and they rather laboured to victory in an instantly forgettable match. 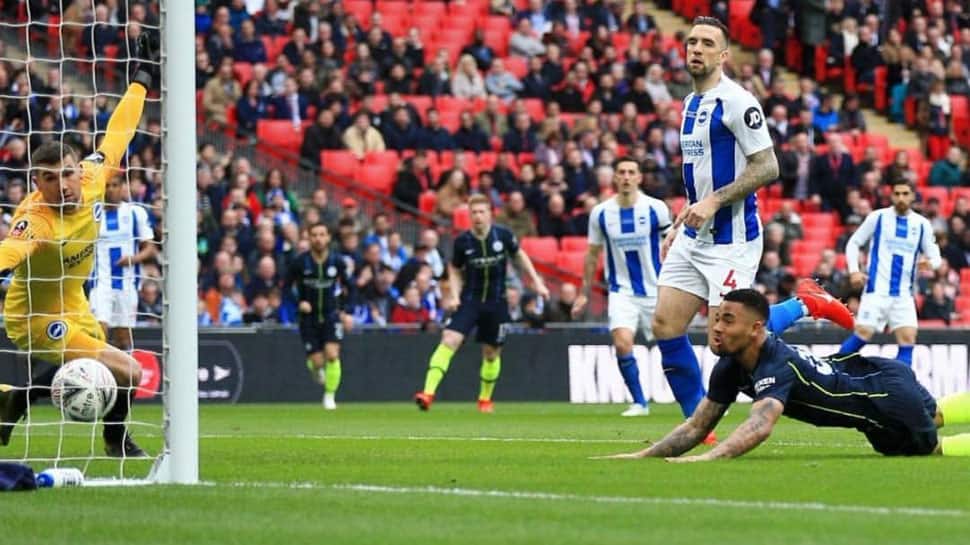 The 'impossible' quadruple dream remains intact for Manchester City after an early headed goal from Gabriel Jesus sealed a scrappy 1-0 win over Brighton & Hove Albion on Saturday to put them into the FA Cup final.

Jesus launched himself into the air to connect decisively in the third minute but City never hit top gear and they rather laboured to victory in an instantly forgettable match.

Nevertheless, after bagging the League Cup, being locked in a titanic battle with Liverpool for the Premier League title and in the Champions League quarter-finals, Pep Guardiola`s side remains on course for an unprecedented clean sweep.

It was a tired-looking display against Premier League relegation battlers Brighton, though, and City will need to rediscover their spark ahead of Tuesday`s trip to Tottenham Hotspur in the first leg of their Champions League last-eight tie.

Guardiola was quick to play down the "Q" word.

"My opinion is that nobody has done it (won the quadruple) so why can we do it?" Guardiola said.

"It is almost impossible to achieve everything, that is the truth. Our fans will come, more than today, for the final, we are losing players every game but still, we will try to do it."

"I am happy to be in the final, we extend our season by one more week and we are happy for that."

Back at Wembley where they beat Chelsea on penalties to win the League Cup in February, City were huge favourites to get past a Brighton side with other things on their mind.

Whatever plan Brighton boss Chris Hughton had cooked up to stop a City side who had won 20 of their last 22 matches in all competitions was in tatters after only three minutes.

In one of the only fluid moves they put together all afternoon at a less-than-full Wembley, Kevin de Bruyne whipped in a superb low cross and Jesus arrived at the far post to plant a diving header past Brighton keeper Matthew Ryan.

The Brighton fans, who greatly outnumbered City`s in the 71,000 crowd, must have feared the worst in the south coast`s club`s first FA Cup semi-final since 1983 when they beat Sheffield Wednesday before losing the final to Manchester United in a replay after the first game ended 2-2.

But the onslaught never arrived.

Had City fullback, Kyle Walker, been shown a red card during the first half after a clash with Alireza Jahanbakhsh the outcome could have been different.

Walker reacted angrily after being shoved in the back and as the players squared up face to face, he appeared to move his head into Jahanbakhsh's forehead.

The incident went to the VAR, which is being used in the FA Cup, but referee Anthony Taylor was not required to send Walker off, although he was replaced at halftime by Danilo.

"I have seen it a few times and my opinion is it is a red card," Hughton said. "If Alireza goes down clutching his head it would have been a different outcome."

Brighton gradually grew in belief and but for a superb goal-line clearance by Aymeric Laporte they could have drawn level, the Frenchman hacking clear just when Glenn Murray seemed poised to equalise early in the second half.

Hughton`s side caused the occasional problem from set-pieces and with City unusually lethargic the result was never in the bag until referee Anthony Taylor blew for fulltime.

Manchester City will face the winners of Watford and Wolverhampton Wanderers who meet in the second semi-final on Sunday.