Such was Ajax`s domination in the early stages that they could already have virtually sealed a place in the final -- but they had to be content with Van de Beek`s 15th-minute goal. 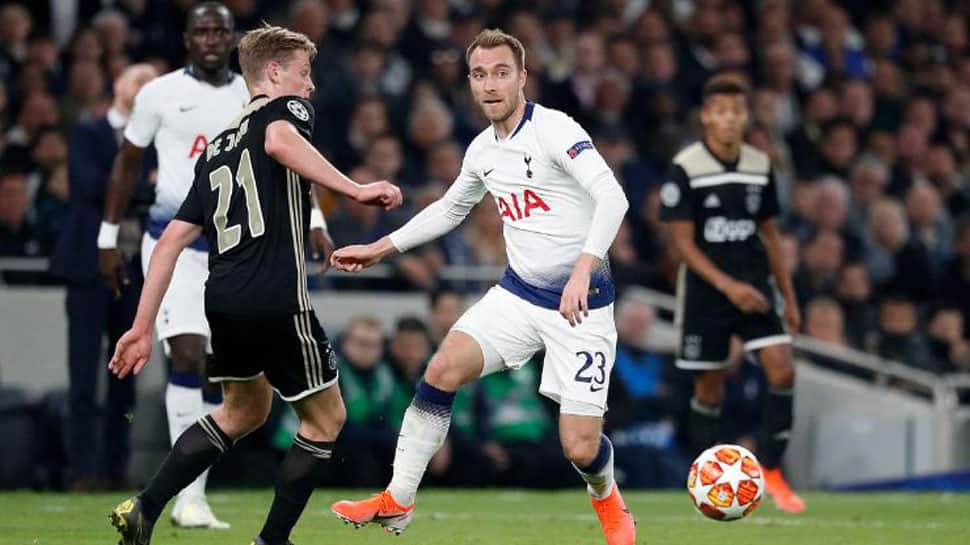 Ajax Amsterdam took a massive stride towards a first Champions League final for 23 years as Donny van de Beek`s early goal earned a 1-0 win at Tottenham Hotspur in the first leg of their semi-final on Tuesday.

Erik ten Hag`s youthful Ajax side, featuring several players polished in the Dutch club`s famed academy, were too energetic for a laboured Spurs team who hardly got a kick in the opening 25 minutes of their first European Cup semi-final for 57 years.

Such was Ajax`s domination in the early stages that they could already have virtually sealed a place in the final -- but they had to be content with Van de Beek`s 15th-minute goal.

Tottenham badly missed injured striker Harry Kane and the suspended Son Heung-min and managed only one shot on target.

Had David Neres`s shot not bounced back off the base of the post late on it would have been an even more calamitous night for Mauricio Pochettino`s struggling side.

As it stands they will go to Amsterdam next week with a glimmer of hope, even if only one club has ever reached the final by overturning a first-leg home loss.

"The away goal was the most important. Unfortunately, Neres hit the upright. If that had gone in, it would have been even better," Ajax`s 19-year-old skipper Matthijs de Ligt said.

"But we must be satisfied with the 1-0 score. It was a tough battle but we were fortunately very sharp tonight."

Christian Eriksen, one of the four former Ajax players in Tottenham`s team, summed up the home mood.

"We were under-par, we didn`t play our best at all. In the first 20 minutes, we were ball-watchers. We need to change it up a lot for the next game," the Dane said.

"We`re lucky they hit the post and hopefully we can turn things around in Amsterdam."

Ajax have already proved too good for Real Madrid and Juventus in the competition this season and were streets ahead of Spurs in the first half on a perfect night for football.

Tottenham were chasing shadows and fell behind after a quarter of an hour when Ajax sliced through the home defence with their quick-passing game.

Hakim Ziyech threaded the ball through to Van de Beek and the midfielder calmly placed his shot past keeper Hugo Lloris.

There was a suspicion of offside but unlike in Tottenham`s epic quarter-final win over Manchester City, when Raheem Sterling`s stoppage-time goal was ruled out, VAR could not save the London side this time as the Ajax fans celebrated.

Van de Beek should have made it 2-0 from Dusan Tadic`s pass as Ajax dominated and when Spurs defender Jan Vertonghen was replaced by Moussa Sissoko in the 39th minute after a clash of heads with teammate and fellow former Ajax player Toby Alderweireld, it seemed nothing was going right for the hosts.

Tottenham`s 34-year-old striker Fernando Llorente did his best to lead a blunt attack with little service, but the Spaniard headed wide from Kieran Trippier`s cross.

The introduction of midfield powerhouse Sissoko injected some much-needed energy into a flagging Tottenham side and he fizzed a shot wide from Llorente`s knockdown before halftime.

Spurs enjoyed their best spell early in the second period as they switched to a more direct approach and Dele Alli had a couple of half chances.

But Ajax showed they can defend as well as attack and rarely looked stretched as the hosts huffed and puffed in search of an equaliser.

Tottenham were vulnerable to the counter, however, and Ajax came close to doubling the lead, and leaving Spurs with a near-impossible task in the second leg, after 78 minutes when Tadic linked up with Neres whose side-footed shot struck the post.