Win against Thailand best match of my career: Sunil Chhetri

India thrashed Thailand 4-1 in their group opener on Sunday. The 34-year-old goal machine struck on either side of the lemon break in the country's stunning win, the first in Asian Cup since 1964. 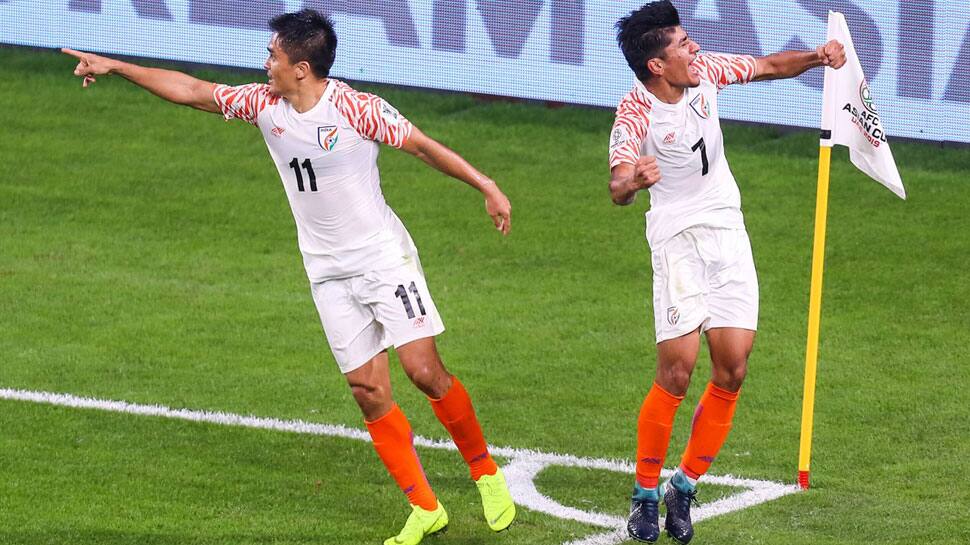 Indian football captain Sunil Chhetri on Monday said that his team's first win in the Asian Cup after more than five decades was the best match of his illustrious international career in which he has out-scored superstar Lionel Messi.

India thrashed Thailand 4-1 in their group opener on Sunday. The 34-year-old goal machine struck on either side of the lemon break in the country's stunning win, the first in Asian Cup since 1964.

"It (Thailand match) stays right top there. I'm fortunate to play a lot of good games for my country but this game is right top there. It's one of those games where the team did really well," Chhetri told PTI from Abu Dhabi when asked to rate the Group A match.

In the process, he became the second highest international goal-scorer among active players with 67 strikes from 105 matches. He went past Argentine superstar Messi, who has scored 65 from 128 matches. Portugal's Cristiano Ronaldo is the highest scorer with 85 from 154 matches.

Chhetri, who made his India debut in 2005, said his side did not expect to win against Thailand by such a big margin.

"I am very happy with the performance and it has been a great start for us. I think the team unity, team understanding and spirit played the role behind the win. The indomitable spirit of the team actually is one of the important reasons why we won the game," he added.

Thailand, with three players Japanese J-League players in their ranks, dictated the pace of the match in the first half with smooth passing but the Indians turned the game on its head with three second half goals that left the Thais shell-shocked.

Asked what transpired between head coach Stephen Constantine and the players at half-time, Chhetri said, "We just made sure that we can't allow them to play their natural game. In the first half, they kept the ball and they were pretty strong. We knew that this is their strong point.

"So we had to press them and not allow to play their natural game, that's what we did. Sandesh (Jhingan) and Anas (Edathodika) were pretty brave telling us to go and press to make the team narrow.

"It's not an easy job but it was one of the reasons which helped us get the win," said the striker from Delhi who is nearing former captain Bhaichung Bhutia's (107) most number of India appearances record in this Asian Cup.

The team man he is, Chhetri said he wanted to celebrate more when his colleagues got the goals.

"Udanta's cross, man, was something outstanding," he said about his second goal in the 46th minute from the Manipuri winger's assist.

"I think I celebrated the third goal most because I was so happy with the build-up and (Anirudha) Thapa scoring. There are some goals which you just celebrate because of the team-effort behind that and Thapa's goal was one of them. I always feel happy when someone from my team scores a goal," he said.

"Then comes Jeje (who scored the fourth goal)! I'm so happy for him. The superstar came and delivered as he does so often. He is one of the best players in our team and it showed how confident he was coming off the bench and scoring the goal."

Asked about the personal milestone of becoming the second highest goal scorer for the country among active players, he brushed aside any comparison with Messi.

A draw against either hosts United Arab Emirates (January 10) or Bahrain (on January 14) could see India through to the round of 16, which, if achieved, will be a historic first for the country.
Chhetri refused to predict anything but said the team will take one game at a time. He, however, agreed that the goal difference of three from the Thailand match could be useful later.

"...We can't predict anything right now. We take one game at a time. As I said, we might not be the strongest team in the group but we'll fight till the end. We are not thinking about qualifying now but just concentrating to do well in the next match and then we'll see where we land," he said.

India finished runners-up in the 1964 edition of the Asian Cup in Israel which was played among just four teams in a round-robin format. In 1984 and 2011, India were knocked out of the group stage.

'What is the point of VAR?' fumes Santiago Solari after Real Madrid loss