The film is spectacular with brilliant visual effects. But the snappy edits during the action sequences are a kill-joy. 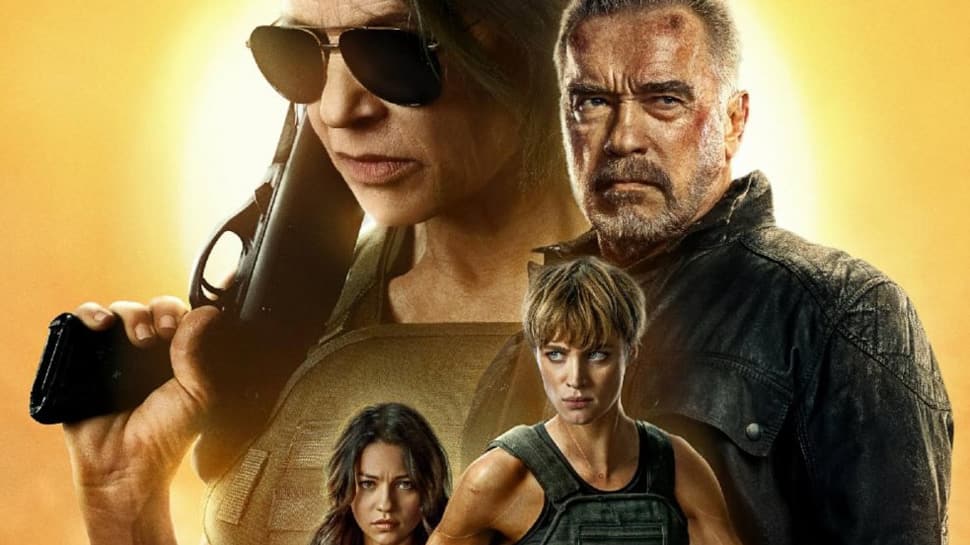 A direct sequel to the first two films of the franchise, this sixth instalment of the "Terminator" series, which began way back in 1984, is all about karma and karmic connections.

The film leverages two key ingredients that have been missing since 1991 -- series creator James Cameron (he is the producer and shares writing credits with three others) and his magnetic leading lady Linda Hamilton.

As in previous sequels, the apocalypse that was supposedly averted in earlier movies is still on its way, even though the idea has been modified slightly. "Dark Fate" ignores years of intervening sequels to pick up the continuity from "Judgement Day". It is August 29, 1997, three years after defeating the T-1000 and we hear Sarah Connor (Linda Hamilton) say, "I know it happened, everybody is gone like leaves and there is a future without hopeï¿½"

A year later, as she and her teenage son John are relaxing on a beach in Guatemala, a T-800 Terminator (Arnold Schwarzenegger), sent from the future, kills John.

Twenty two years later in Mexico City. The new target of the newest Terminator Rev-9 (Gabriel Luna) is an auto worker, Daniella Ramos aka Dani (Natalia Reyes), who is unaware of why she is being targeted.

Meanwhile, to protect her, the humans send Grace (Mackenzie Davis), a human resistance fighter with cybernetic enhancements. How Grace and Dani join hands with Sarah Connor and destroy the Rev-9, forms the crux of the narrative.

Technically, "Dark Fate" possesses the same premise as the films that preceded its in-movie continuity: a killing machine hunting a future leader and a protector trying to save humanity's future salvation. So, except for a slight variation in the telling, there is no major take-home or originality in the film.

Similarly, Rev-9 is all but indestructible. So there is no suspense attached to his fate, only repetitive and grindingly mediocre action sequences where his opponents try hard to destroy him. In fact, the chase where the Terminator tries to catch up with his target is more interesting than the actual climax fight.

On the performance front, Gabriel Luna as the antagonist has very little to offer except for a succession of blank stares and menacing smirks that establish a threat, albeit a dull one.

Natalia Reyes is charming as the bemused Dani. She appears to be a perfect fit into the stereotypical, defenceless character that lacks energy, aura and spunk of a leader. Mackenzie Davis as Grace the muscular, agile, gender-fluid super soldier from the future is an attractive show-stopper. Hamilton, who has barely been seen on the big screen in years, brings the weight of time to her portrayal of Sarah. With a mix of bitter cynicism and resigned weariness, she slips into the skin of her character with natural ease.

Arnold Schwarzenegger is back, looking fit and younger, in a smaller but enjoyable role as Carl, an evolved machine that has its own life. He is now a fully domesticated person who happens to have been the Terminator of all Terminators long ago and is now in repentant mode.

The film is spectacular with brilliant visual effects. But the snappy edits during the action sequences are a kill-joy.