According to CRPF Director General Rajeev Rai Bhatnagar the convoy was carrying 2500 soldiers from Jammu to Srinagar when the suicide bomber, identified as Adil Ahmad from Kakapora in Pulwama, triggered the blast. 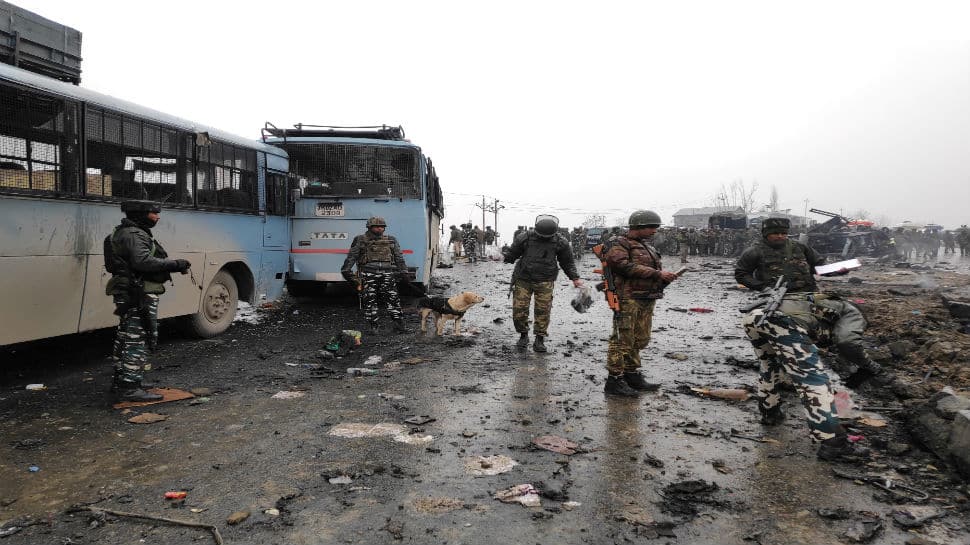 Srinagar: A Jaish-e-Mohammed suicide bomber on Thursday afternoon rammed an explosive-laden car into a Central Reserve Police Force (CRPF) convoy in Lethpora area of Pulwama district's Awantipora killing at least 39 soldiers and injuring several others. A man claiming to be JeM spokesperson called a local news agency GNS and said that it was a "fidayeen"(suicide) attack. It is the biggest IED attack in the state where armed insurgency supported by Pakistan started in the late 1980s.

The convoy of 78 buses was carrying CRPF soldiers and the blast was so powerful that the bus carrying at least 39 securitymen was completely mangled and bodies of several troopers were blown to pieces. Some reports also claim that another group of terrorists then opened fire on the convoy.

The area where the attack took place was a gory site with body parts strewn all around and soldiers trying to rescue their injured comrades. According to CRPF Director General Rajeev Rai Bhatnagar the 78-bus convoy was carrying 2,547 soldiers from the transit camp in Jammu to Srinagar when the suicide bomber, identified as Adil Ahmad from Kakapora in Pulwama, triggered the blast by ramming his car into a bus at around 3:20 pm. According to Jammu and Kashmir Police, Adil Ahmad had joined Jaish-e-Mohammed in 2018.

Security officials say the huge convoy left Jammu early Thursday morning at 3:30 because the Jammu-Srinagar highway had been closed for the last two days due to bad weather and heavy snowfall.

Officials say the casualties are likely to go up as some of the injured CRPF personnel are critical. All the injured personnel have been admitted to Army Base Hospital in Srinagar which is almost 30 kilometres from the blast site. More security forces have been rushed to the area and the spot where the convoy was hit has been cordoned off by the soldiers.

Incriminating material, including arms and ammunition, were recovered from the site of encounter. The identities and affiliations of the terrorists who were killed are yet to be identified.

"Based on a credible input about the presence of terrorists in the Gopalpora area of Chadoora in Budgam district, a cordon and search operation was launched in the intervening night (of Tuesday and Wednesday)," a police spokesman said.

He said when the search operation was underway, the terrorists fired on the security forces. The search party retaliated and it led to a gunfight in which the two terrorists were killed.