"Another batch of 4,694 yatris left the Bhagwati Nagar Yatri Niwas today morning in two escorted convoys for the Kashmir Valley. Of these, 2,052 are headed for the Baltal base camp and 2,642 to Pahalgam," police said. 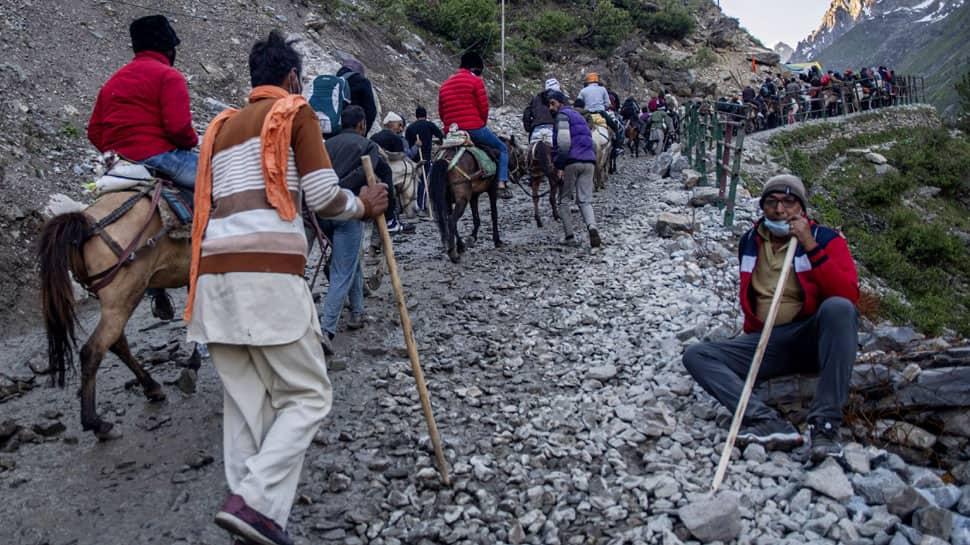 Jammu: Over 4,600 pilgrims left Jammu on Wednesday for the Amarnath cave shrine, after as many as 11,456 pilgrims completed 'darshan' on Tuesday. "Another batch of 4,694 yatris left the Bhagwati Nagar Yatri Niwas today morning in two escorted convoys for the Kashmir Valley. Of these, 2,052 are headed for the Baltal base camp and 2,642 to Pahalgam," police said.

The first convoy left Jammu at 3.30 a.m. while the second at 4.05 am. The MET predicted a spell of light rain/shower in Baltal-Holy Cave, Pahalgam-Holy Cave axis towards the evening although chances are less. Current temperature at Holy Cave was 8.6 degrees Celsius. This year's Amarnath Yatra started on July 1 and will end after 45 days on August 15 coinciding with Shravan Purnima.

The cave shrine situated at 3,888 metres above the sea-level in Kashmir Himalayas houses an ice stalagmite structure that symbolises mythical powers of Lord Shiva, according to the devotees.

Kashmiri Muslims have historically helped their Hindu brethren to perform the annual pilgrimage with ease and convenience. In fact, it was a Muslim shepherd, named Buta Malik who discovered the cave shrine in 1850.

According to folklore, a Sufi saint gave the shepherd a bag of charcoal that turned out to be gold. Symbolically, the story was proven right because the shepherd family shared a portion of the offerings at the Cave shrine for more than 150 years.