PM Modi urged the international community to unite in the fight against terrorism and talked about the steps being taken by India to fight climate change. 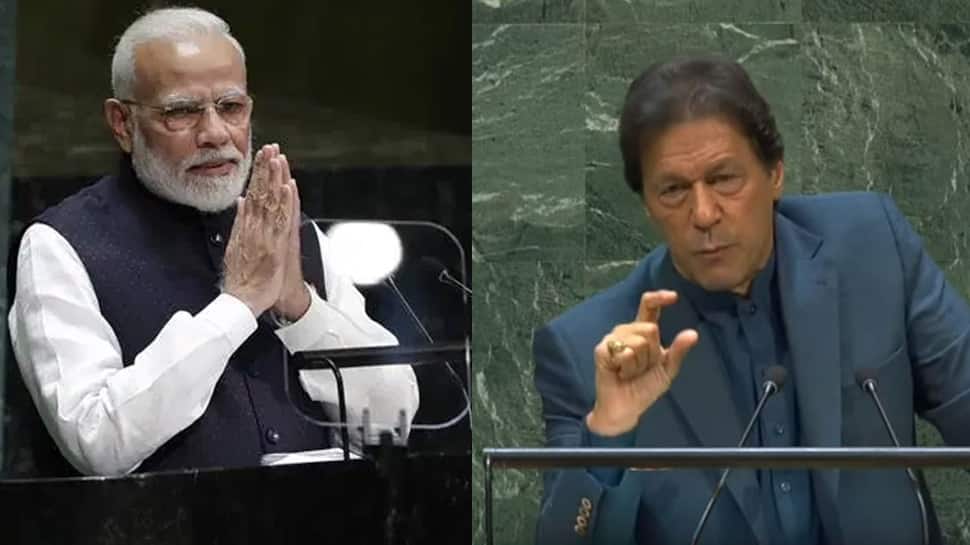 NEW DELHI: Prime Minister Narendra Modi spoke like a global leader when he addressed the 74th session of the UN General Assembly on Friday during which he urged the international community to unite in the fight against terrorism.

During his brief speech, the PM also talked about steps being taken by his government to fight climate change as he presented a roadmap for world peace and stability. However, PM Modi's very ''balanced' and ''to-the-point'' speech stood in stark contrast to the one he had given to the 69th session about five years ago.

Having received a thumping mandate from Indians, a more confident-looking PM Modi delivered his maiden speech at the UNGA after coming to power for a second term on Friday.

First and foremost, the centre of PM Modi`s speech shifted from the fight against terrorism to the fight against climate change this year. He also made an effort to rise above regional tiffs - not mentioning Pakistan at all this year in his address - and highlighted India's contributions to the global community and the UN instead.

While there was a large emphasis on philosophy and ideas in his 2014 speech, his Friday's speech mentioned the concrete action taken by India under his leadership in the last five years.

His comments on climate change is one example of this. "For us in India, respect for nature is an integral part of spiritualism. We treat nature's bounties as sacred," PM Modi had said in 2014. This year, the Prime Minister mentioned the sweeping ban on single-use plastic in India which is set to come into force on October 2.

The PM also said that while India has not contributed much to global warming, it is spearheading several initiatives internationally in the fight against climate change, including increasing its renewable energy capacity to 450 GW in the coming years.

He also mentioned India's goal to eradicate tuberculosis by 2025 - five years ahead of the deadline set by the UN under its sustainable development goals - to show New Delhi`s dedication towards achieving the SDGs.

Through this, the PM tried to highlight how a developing country like India was seeking to transform the lives of its people, saying that its efforts will benefit the entire humanity.

The most visible difference between the two speeches is no mention of Pakistan in the latest one, while in 2014 he had put forth his openness at engaging with Islamabad in a peaceful environment "without the shadow of terrorism".

"I am prepared to engage in a serious bilateral dialogue with Pakistan in a peaceful atmosphere, without the shadow of terrorism, to promote our friendship and cooperation. However, Pakistan must also take its responsibility seriously to create an appropriate environment. Raising issues in this forum are not the way to make progress towards resolving issues between our two countries," the Prime Minister had said during the 69th session.

Five years down the line, while the Prime Minister called on countries to unanimously fight against terrorism, he refrained from mentioning Pakistan.

Imran Khan, on the other hand, made India the centre of his speech at the global platform by bringing up India`s decision to abrogate Article 370 in Jammu and Kashmir.

India has time and again highlighted that its steps in J&K are a matter of its internal affairs, a stand which was reaffirmed with no mention of Kashmir either during Modi`s address.

During Friday's speech, PM Modi also called for a fresh impetus to multilateralism - a jarring contrast to what US President Donald Trump had said to the same forum just earlier this week.

"Modern technology of the 21st century is bringing collective changes in society, economy, security, connectivity and international relations. A scattered world is not in anyone`s interest under these circumstances," PM Modi said.

"Neither do we have the option to stay limited within the boundaries of our state," he added while calling for fresh energy to be infused to multilateralism.

The latest speech can be taken as PM Modi's endeavour to change the perceived global narrative on India -- to take India from being seen as a developing nation to one that makes contributions to the global community.

His mention of the International Solar Alliance or even the Coalition for Disaster Resilient Infrastructure -- projects which have been spearheaded by India - are a prime example of this.

India has also renewed efforts to push for the early adoption of the Comprehensive Convention on International Terrorism, as proposed by the country.

Five years ago, PM Modi had talked about bringing reform to the UN.

This year, through his speech, he made a strong case for securing a seat for India at platforms like the UN Security Council by outlining India`s efforts and contributions to the global community.