Shahi Imam of Delhi's famous Jama Masjid, Syed Ahmed Bukhari has attacked the Centre over rising incidents of mob lynching and the alleged killing of Muslims in the name of cow protection.

DELHI: The Shahi Imam of Delhi's famous Jama Masjid, Syed Ahmed Bukhari has atacked the Narendra Modi-led NDA government at the Centre over rising incidents of mob lynching and the alleged killing of Muslims in the name of cow protection.

Referring to the chargesheet filed by the Congress government in Rajasthan against 2017 Alwar mob lynching victim Pehlu Khan and his two sons on charges of cattle smuggling, the Shahi Imam said that the government has become a mute spectator to such incidents.

In a press release issued by his office, the Shahi Imam said, ''people are making a mockery of the law and the government is doing nothing to stop such elements.''

Imam Bukhari said that Muslims in India were suffering due to the discriminatory attitude of the government. An Indian Muslim is fighting a war every day for his survival. He is being threatened, suppressed and terrorised every day.

The Shahi Imam of Jama Masjid warned that Muslims are now running out of patience. ''Several years since the country gained Independence, Muslims in India are yet to get justice,'' he said. 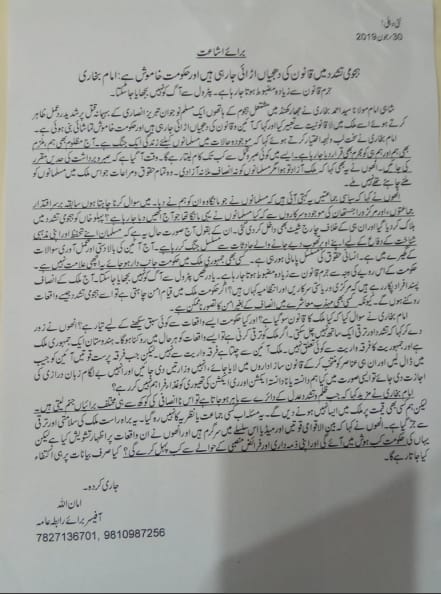 The Shahi Imam also attacked the Rajasthan government for filing the chargesheet against Pehlu Khan, who was killed by a violent mob of cow vigilantees in Alwar in 2017 on suspicion of cow smuggling.

He also condemned the recent mob lynching incident in Jharkhand.

Imam Bukhari had in past written to Prime Minister Narendra Modi seeking stern action against mob lynching and alleged atrocities on minorities, including Dalits and Muslims in India.

In his letter, Imam Bukhari alleged that the Modi government has failed to deliver its poll promise 'sabka sath sabka vikas'.

"You gave a promise of treating 125 crore Indians with equality, irrespective of their religion and ethnicity... but unfortunately, the ground reality is not only contrary to this, but is a cause of concern for every civilised Indian citizen," he said in the letter.

He had also written a similar letter to Congress president Rahul Gandhi.