The Chief Minister, however, appealed to the Prime Minister and all other political parties not to engage in any sort of politics during coronavirus crisis, while asking everyone to come forward and work together in the hour of crisis. 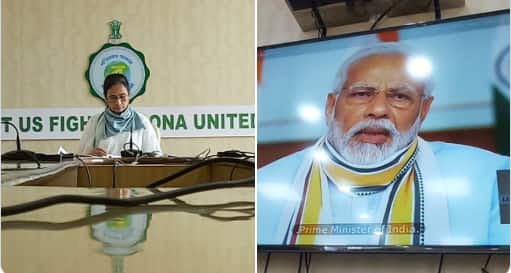 New Delhi: West Bengal Chief Minister Mamata Banerjee on Monday (May 11) alleged that the Centre is discriminating against the state amid coronavirus COVID-19 pandemic during a video conference with Prime Minister Narendra Modi. Mamata said, "We are together in this crisis, however, somehow West Bengal has been targeted by the central government to get political mileage."

West Bengal Chief Minister, however, appealed to the Prime Minister and all other political parties not to engage in any sort of politics during coronavirus crisis, while asking everyone to come forward and work together in the hour of crisis.

She said, "When the government of India has opened almost everything including the opening of land borders, starting trains and opening airports, then what is the point in continuing with the further lockdown."

Apart from the special economic package for the state, Mamata reportedly sought the central government's assistance to bring back all Bengal migrant labourers stranded in various parts of the country.

The meeting today held between PM Modi and Chief Ministers of different states to review the ground situation across India in the third phase of the nationwide lockdown.

Notably, the Prime Minister's meeting with chief ministers of states and union territories discussed the steps for reviving the battered economy and scaling up all efforts to bring more 'red' zones with high COVID-19 caseload into 'orange' or 'green' zones, as they push for stepping up economic activities in a calibrated manner.

Meanwhile, the BJP had accused the West Bengal of "misleading" people on the extent of coronavirus cases in the state by "hiding" its real numbers.

BJP general secretary Kailash Vijayvargiya said, "When West Bengal has been hit by COVID-19, then where have you hidden Mamata ji? People of your state want to know where are you and what are you doing? The state's people and Bengali labourers outside have been pleading you for help."

Vijayvargiya, who is in charge of his party's affairs in the eastern state, alleged that the Trinamool Congress president "hid" the real numbers of coronavirus patients and "misled" people, adding that there has been "corruption" in the ration received from the Centre while the needy people remained "hungry".

Notably, the BJP has accused the Mamata government of mishandling the crisis, while the TMC, in turn, has said the saffron party has used the central government machinery for political purpose.

"They are trying to portray that if these migrant labourers return the corona cases in West Bengal will further rise. The state government has to clarify its stand on the migrant workers' issue," Chowdhury told PTI.