Speaking to reporters, Hariprasad asked that Union Minister and senior BJP leader Ravi Shankar Prasad should clarify whether there is any match-fixing between Pakistan and PM Modi. 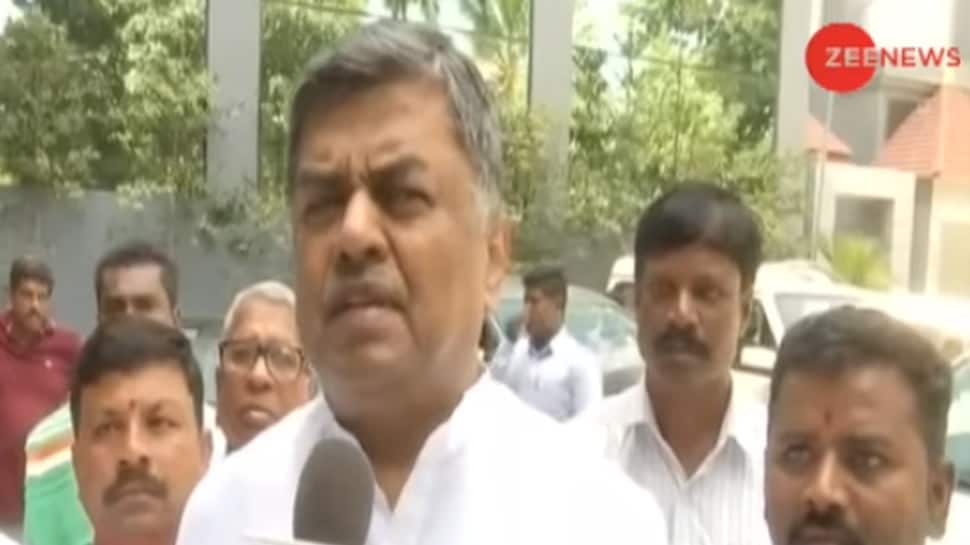 In a statement stoking massive controversy, Congress leader BK Hariprasad on Thursday alleged that the Pulwama terror attack took place because of a 'match-fixing' between Prime Minister Narendra Modi and Pakistan.

On February 14, 40 CRPF personnel were killed after a suicide attack by a terrorist in Pulwama, Jammu and Kashmir.

Speaking to reporters, Hariprasad asked that Union Minister and senior BJP leader Ravi Shankar Prasad should clarify whether there is any match-fixing between Pakistan and PM Modi.

He further alleged that without their knowledge the Pulwama attack would not have taken place.

"Ravi Shankar Prasad should clarify whether there is any match-fixing between Pakistan and PM Narendra Modi. Or else without their knowledge, the Pulwama attack would not have taken place," said Hariprasad.

Hariprasad's remarks came after Prasad alleged that Congress chief Rahul Gandhi neither believes the Indian Air Force (IAF) nor the Supreme Court verdict and asked if he needed a certificate from Pakistan about the Rafale fighter aircraft. The Congress president believes Pakistan more than Indian forces and its leaders, Prasad said.

Stretching his allegations further, the Congress leader said that the chain of events that took place after the Pulwama attack indicates that PM Modi had a match-fixing with the people of Pakistan.

"If you look at the chain of events that have taken place after Pulwama, it looks like PM Modi had a match-fixing with the Pakistan people," he added.

He also alleged that Jammu and Kashmir Governor Satya Pal Malik has openly admitted that the attack is a total failure of intelligence in Pulwama.

"The Governor of Jammu and Kashmir has openly admitted that this is a total failure of intelligence in Pulwama," he added further.

Hariprasad's remarks drew condemnation from the BJP, which said the Congress leader has crossed all limits of decency by insulting the armed forces with such "obnoxious" remarks and that the party has no future under its chief Rahul Gandhi.

Prasad hit back at the Congress leader, saying it is a day of "great pain" for the country that the Congress "could stoop so low for political gains". "Congress leader B K Hariprasad says there is collusion between Modi and Imran Khan behind air strikes. He crossed all limits of decency and propriety...He has dishonoured the country and its army. They have insulted forces and martyrdom of 40 CRPF personnel. The entire world condemns obnoxious statement and the Congress has no future under Rahul's leadership," Prasad said.

"I do not seek any apology from Congress because people of India will respond to these insulting statements. These comments are not accidental but designed and directed on the instance of Gandhi," the union minister and BJP leader also said.

Reacting to Hariprasad's comment, Congress National Spokesperson Priyanka Chaturvedi said that the statement of Hariprasad doesn't reflect the stand of the party. She further added that as he is not a spokesperson of the party no action will be taken against him.

This is not the first controversial statement of Hariprasad.

Earlier in January, he had made a controversial 'swine flu' dig at BJP president Amit Shah. Hariprasad had mocked Shah's health, saying he contracted swine flu since his party made an alleged bid to destabilise the Congress-JDS government in Karnataka.

Hariprasad's statement came on a day when Rahul attacked the prime minister over the Rafale deal alleging that he delayed the aircraft purchase and there should be a probe against him.

The BJP and the Congress have been engaged in a slinging match over the events in the aftermath of the Pulwama terror attack, including the air strike carried out by the IAF on a terrorist camp in Pakistan.