The defence ministry said the Indian Air Force's C-17 and IL-76 heavy-lift aircraft have started airlifting big, empty oxygen tankers from their place of use to filling stations across the country to speed up the distribution of medical oxygen as India reels under the second wave of COVID-19 crisis. 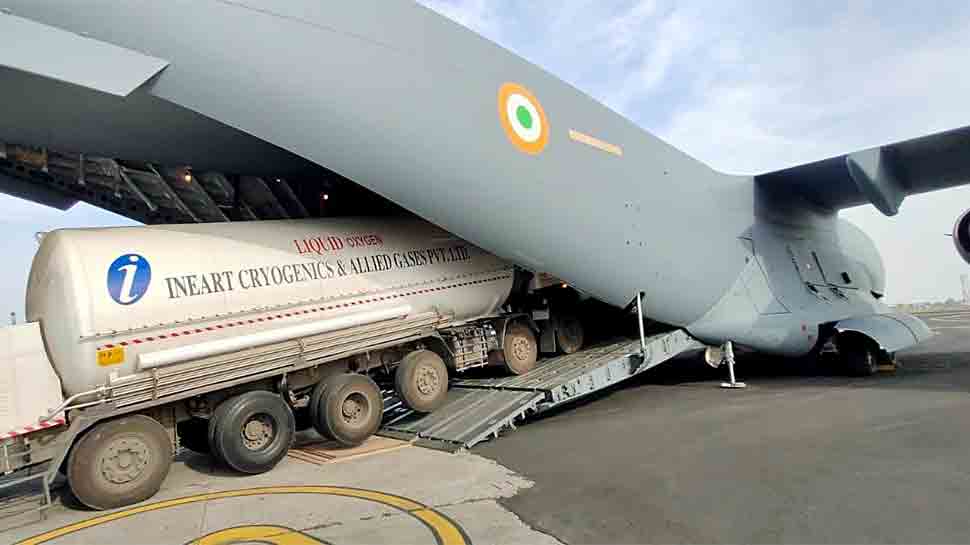 New Delhi: The Indian Air Force (IAF) airlifted big, empty oxygen tankers and containers to various filling stations across the country on Friday (April 23) to speed up the distribution of the much-needed medical oxygen in treating COVID-19 patients. According to officials, besides transporting essential medicines as well as equipment required by the designated COVID hospitals in various parts of the country, the IAF also airlifted doctors and nursing staff from Kochi, Mumbai, Visakhapatnam and Bengaluru for various hospitals in Delhi.

The IAF deployed its transport aircraft C-17, C-130J, IL-76, An-32 and Avro while keeping its Chinook and Mi-17 helicopters on standby, said officials.

India is struggling with a second wave of coronavirus infection and hospitals in several states are reeling under a shortage of medical oxygen and beds in view of a rising number of COVID-19 cases. The officials said

The defence ministry said the IAF's C-17 and IL-76 heavy-lift aircraft have started airlifting big, empty oxygen tankers from their place of use to filling stations across the country to speed up the distribution of medical oxygen. "In addition to this, the C-17 and IL-76 have transported a large quantity of load comprising bio-safety cabinets and autoclave machines for the setting up of an additional COVID test facility at Leh (in Ladakh)," it added.

C-17 and IL-76 aircraft airlifted cryogenic oxygen containers from Air Force Station Hindan to Panagarh for recharging, in support of the fight against Covid-19. Similar airlift tasks are underway across the country. pic.twitter.com/1GMdOBRqWY

Personnel and equipment of Rapid Action Medical Team (RAMT) have been airlifted from Air Force Stations Jorhat & Kalaikunda for the COVID hospital at Hindan.#IndianAirForce pic.twitter.com/trI8caOQpn

The officials told PTI that eight empty cryogenic oxygen containers were airlifted from Begumpet in Telangana to Bhubaneshwar by a C17 aircraft while one empty cryogenic container was transported from Indore to Jamnagar. Personnel and equipment of the IAF Rapid Action Medical Team (RAMT) were airlifted from Jorhat in Assam to Hindan in Ghaziabad by a C130 transport aircraft.

The oxygen containers will be transported by road or rail to various hospitals once they are refilled, the officials said. Containers filled with oxygen are generally not transported on board military aircraft as they are considered combustible and may pose a risk to the planes.

The ministry said the IAF's transport aircraft and helicopter assets are on standby to be deployed at a short notice. "Indian Air Force has swung into action by carrying out sorties from various parts of the country to airlift oxygen containers, cylinders, essential medicines, equipment required for setting up and sustaining COVID hospitals and facilities," the ministry said in a statement.

As per a data released by the health department, India recorded a single-day rise of 3.32 lakh coronavirus cases and 2,263 fatalities on Friday (April 23).

DNA Exclusive: COVID 2.0, Virafin and PM Modi's directions to rein in the pandemic