Congress president Rahul Gandhi on Friday blamed the RSS and the ruling BJP at the Centre for rising atrocities against Dalits across the country. 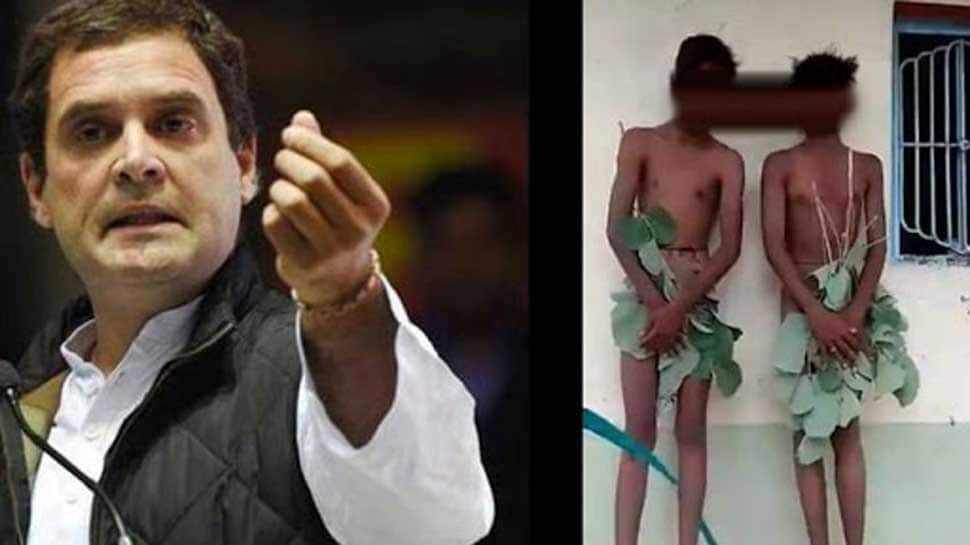 The photo has been intentionally morphed to protect the identity of the minors
Share:
Written By:

JALGAON: Congress president Rahul Gandhi on Friday blamed the RSS and the ruling BJP at the Centre for rising atrocities against Dalits across the country.

The Gandhi scion said this after three minor Dalit boys were thrashed, stripped and paraded naked for swimming in a village well belonging to a wealthy upper-caste farm owner in Wakadi village in Jalgaon district of Maharashtra.

"The sole crime of these Dalit children was they were taking a dip in an 'upper caste' well. Humanity is struggling to save its dignity," Rahul Gandhi said in a tweet on Friday.

The Congress leader continued by saying that ''if we don't raise our voices against this politics of hate and poison of the Rashtriya Swayamsevak Sangh and the BJP, history would not forgive us.''

Rahul also posted a video of the boys being mercilessly thrashed by some upper caste men for jumping in the well.

Rahul Gandhi's remarks on the issue, which has snowballed into a major political controversy, came even as a high-level team of Maharashtra Congress visited the village to assess the situation.

Strongly condemning the thrashing of the Dalit boys, Union Minister for Social Welfare Ramdas Athawale said that he will visit the village to meet the victims and their families.

The incident took place on June 10, but the matter came to fore only after a video about the same went viral on social media.

The incident served as a major embarrassment for the ruling BJP-Shiv Sena combine even as Chief Minister Devendra Fadnavis is on a tour of Dubai, Canada and the US to attract investment.

To beat the scorching heat, the three young boys from the Dalit community, aged around 12-14, had jumped into a village well for a cool swim on last Sunday.

As the news spread, many people from the upper caste gathered near the well and pulled out the boys. They were then thrashed, stripped and paraded naked around the village.

In the viral video, the boys can be seen wearing only sandals and some patvelia leaves and protesting when at least one person was assaulting them on the legs and back with sticks and what appeared to be a leather belt.

The families of the three boys later lodged a complaint with the local police.

Several political leaders from the opposition Congress and ruling BJP, including ex-minister Eknath Khadse, and others from various political parties have condemned the incident and demanded that the culprits be booked under the SC/ST Act.

At least two persons have now been arrested in connection with the incident, said Maharashtra Social Justice Minister Dilip Kamble.

Water Resources Minister Girish Mahajan too said two persons are booked under the provisions of Scheduled Castes and Tribes (Prevention of Atrocities) Act, Protection of Children from Sexual Offences (POCSO) Act and Information Technology Act, besides other charges.