It is to be noted that demand for PUC certificates has increased massively after the implementation of the new Motor Vehicle Act and the decision to increase the pollution checking centres will come as a major relief for vehicle owners in Delhi.

In an apparent effort to reduce the long waiting hours at pollution checking centres across Delhi for PUC (pollution under check) certificates, the government on Wednesday released a list of 42 DTC depots and terminals where private vehicles pollution checks will be allowed.

It is to be noted that demand for PUC certificates has increased massively after the implementation of the new Motor Vehicle Act and the decision to increase the pollution checking centres will come as a major relief for vehicle owners in Delhi.

Delhi Transport Minister Kailash Gehlot said that there are over 1.10 crores vehicles in Delhi and the number of vehicles which are less than 15-year-old are over 70 lakhs. He added that some vehicle owners had informed the government about some pollution checking centres, who were overcharging for issuing PUC certificates and the government has suspended two centres for violating the guidelines laid down by the government. Gehlot added that the government will take strict action against centre owners if they will be caught harassing the vehicle owners.

Here is the list of PUC centres where private vehicles will now be allowed to get the certificates: 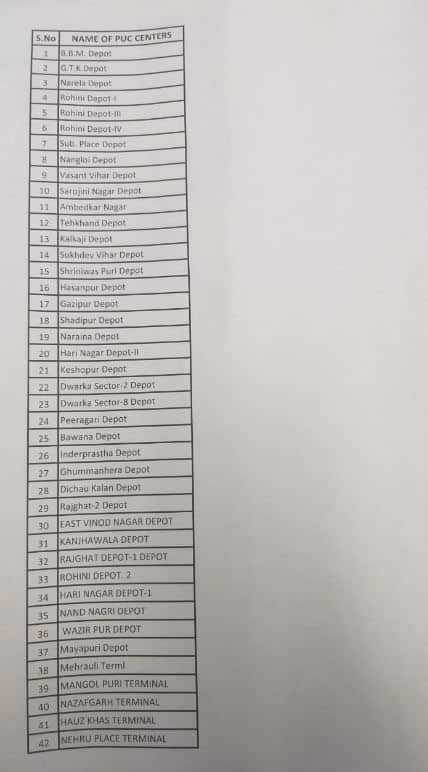 Under the new Motor Act, which was implemented on September 1, the violation of PUC norm carries a penalty of Rs 10,000. Previously it was Rs 1,000 on the first violation and Rs 2,000 the second time. As per the rule, PUC tests are mandatory in Delhi after every three months. According to government sources, the number of vehicles turning up for PUC tests before the implementation of new Motor Act were around 10,000 to 12,000 per day but the number has now jumped to over 45,000 per day.

In the PUC test, vehicles are checked for emissions of smoke, carbon monoxide, hydrocarbons and other air pollutants. After the test, a PUC certificate is issued to certify that the vehicle meets emission and pollution control norms. It is to be noted that computerised facilities for checking of pollution levels and issue of PUC Certificates are already available at several petrol pumps/workshops across Delhi. These authorised Pollution Checking Centres are available across the country.