Zee News Editor-in-Chief Sudhir Chaudhary did an analysis on a 'shop' which sells 'freedom and democracy' like a product in the form of rating every year. And many weak and poor countries are forced to accept these ratings. 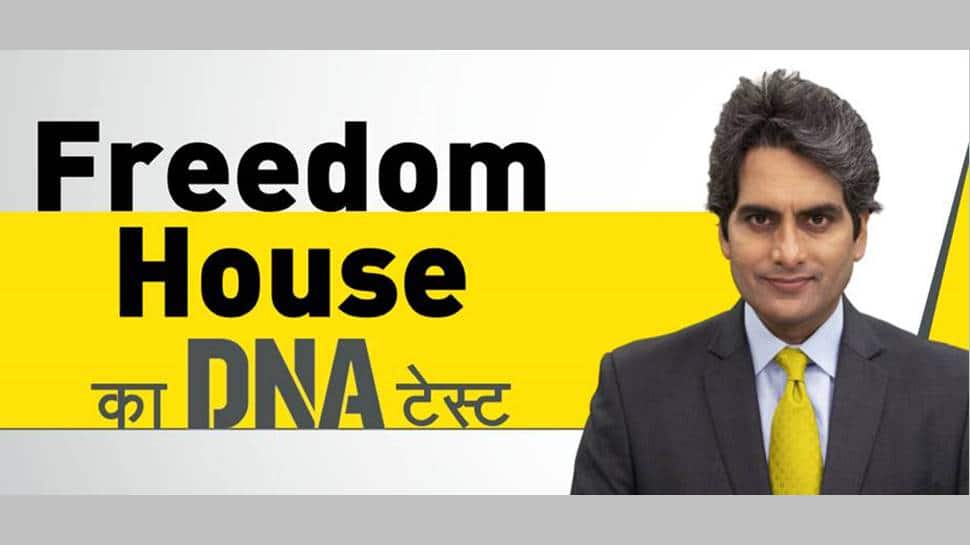 New Delhi: There are several organisations that are operating business in the name of 'freedom' and 'democracy' and governments, institutions and NGOs of many big countries rest on these two words. One such organisation is Freedom House and it is one of the oldest NGOs in America. The thing to note here is that these NGOs report on the freedom index of other countries of the world every year.

On Thursday, Zee News Editor-in-Chief Sudhir Chaudhary did an analysis on a 'shop' which sells 'freedom and democracy' like a product in the form of rating every year. And many weak and poor countries are forced to accept these ratings.

The Freedom House released ratings of 210 countries for the year 2020 and it has classified India as 'partly free' from the earlier 'free' category. That is, India has been described as a country where there is very little freedom for the people.

The NGO report makes gives the impression that democracy has ended and the freedom of citizens has been limited in most countries including India. After reading this report, one can easily be mislead.

This NGO, named Freedom House, builds the Global Freedom Index based on 25 things which includes political freedom, fundamental rights of citizens, free media, right to protest, freedom to work for foreign NGOs, and the issue of free elections. And the important thing is that this time Freedom House has given India a low rating on all these parameters.

According to this report, India has tumbled down five places in the Global Freedom Index of 210 countries and now ranks at 88 from 83.

This NGO has given India 34 out of 40 for freedom of political rights and 33 out of 60 in the matter of free rights of citizens. But the same NGO, which gave India 67 out of 100, has given 83 points out of 100 to the US and has placed it in the category of countries where there is political freedom as well as full freedom for the citizens.

And the reason for this is that NGO gets 80 per cent of its funding from America. That is, if this NGO gets Rs 100 then Rs 80 come from the US government which explains why America passed with good marks in this ratings.

If the ratings were fair, America would not have got such good numbers in terms of democracy and freedom of citizens and the most recent example is Capitol Hill violence that rocked US on January 6, 2021. At least six people were killed and one among them was killed by a police bullet. Also, 25 people were killed last year in the violence against black people in America.

Why are these ratings needed and how are are used?

Firstly, the Freedom House Ratings are used mostly by media institutions and MPs of America and by doing this, the image of those countries whose ratings are not good.

According to a report, between 2004 and 2016, the US government has given $10 Billion i.e. Rs 70,000 crore to many countries of the world and among these, the highest funding was given to those countries whose ratings were good.

Thirdly, the World Bank creates a list named Worldwide Governance Indicators based on these ratings which means how many countries will get help from World Bank, it also depends to a large extent on this report.

And the fourth thing is that America also uses this kind of rating agency to maintain its foreign policy. That is, a country which is in confrontantion with the US the rating is reduced and the countries that support it, are given top position in the list.