Tensions flared up between India and Pakistan after the convoy of 78 buses, in which around 2,500 CRPF personnel were travelling from Jammu to Srinagar, came under attack. 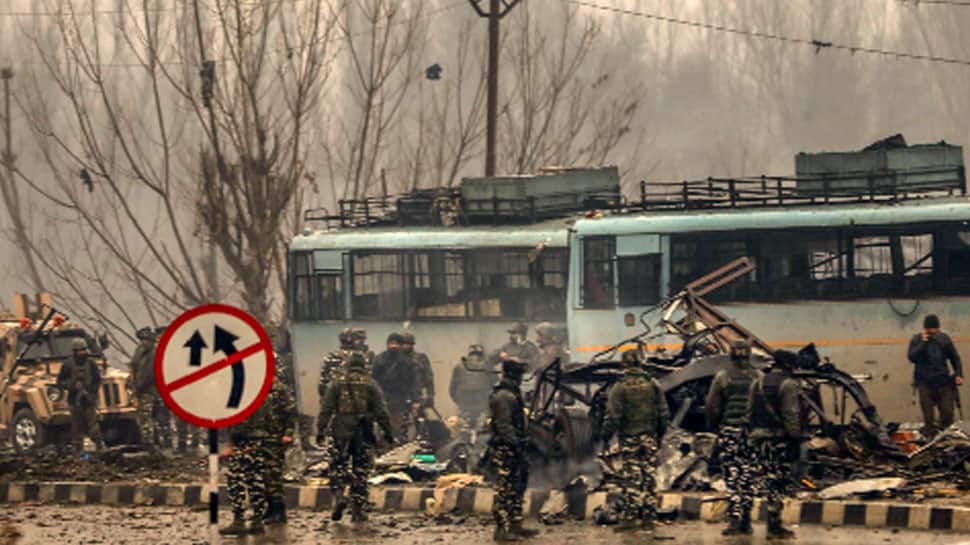 India on February 14, 2019, was shaken by what can be defined as one of the deadliest terror attacks on its soil in recent times. A total of 40 Central Reserve Police Force (CRPF) personnel were martyred after a convoy of vehicles carrying security personnel on the Jammu-Srinagar National Highway was attacked by a vehicle-borne suicide bomber at Lethpora in Jammu and Kashmir's Pulwama district. A Jaish-e-Mohammad (JeM) terrorist rammed his vehicle carrying explosives into the convoy at around 3 pm.

Tensions flared up between India and Pakistan after the convoy of 78 buses, in which around 2,500 CRPF personnel were travelling from Jammu to Srinagar, came under attack. Nationwide protests erupted against the dastardly terror attack even as the country bid a teary farewell to its bravehearts.

Leaders across the party lines and civil society condemned the attack and called for an appropriate response. "I feel the same fire in my heart that`s raging inside you," Prime Minister Narendra Modi said on February 17, 2019, days after the attack took place. On February 16, he had said that "all tears will be avenged" and the armed forces have been given "full freedom to decide the place, time, intensity and nature of the retaliation against the enemy".

United Nations and several countries from across the globe condemned the Pulwama terror attack and extended their support to India in the fight against terrorism.

Around 12 days after the terror attack, in the wee hours of February 26, 2019, Indian Air Force (IAF) jets bombed the JeM camp at Balakot in Khyber Pakhtunkhwa of Pakistan. The IAF used Mirage 2000 fighter jets for the precision strike, and official sources said the aircraft spent 21 minutes in Pakistani air space - a remarkable feat as one minute is equal to 17 km at attack speed.

The fighter jets were backed by Emb 145 early warning plane which was deployed to pick up any emerging threat at a large distance and alert the attacking pilots. India also used a mid-air refueller, the sources said. The Mirage 2000 fires a range of Western weapons. After the upgrade, the Mirages have Mica air-to-air multi-mission missiles and a range of precision-guided bombs including Israeli Spice.

As celebrations erupted across India, Foreign Secretary Vijay K Gokhale said, "India struck the biggest training camp of JeM in Balakot. In this operation, a very large number of JeM terrorists, trainers, senior commanders and groups of jihadis who were being trained for fidayeen action were eliminated. This facility at Balakot was headed by Maulana Yusuf Azhar (alias Ustad Ghouri), the brother-in-law of (JeM leader) Masood Azhar."

Gokhale had said the Indian government was "firmly and resolutely committed to taking all necessary measures to fight the menace of terrorism. Hence, this non-military pre-emptive action was specifically targeted at the JeM camp. The selection of the target was also conditioned by our desire to avoid civilian casualties." He had said that such "massive training facilities capable of training hundreds of jihadis could not have functioned without the knowledge of Pakistani authorities.''

"Credible intelligence was received that the JeM was attempting another suicide terror attack in various parts of (India), and the fidayeen jihadis were being trained for this purpose. In the face of this imminent danger, a pre-emptive strike became absolutely necessary," he had added.

Following the attack, India has heightened vigil along its border with Pakistan.

Pakistan`s efforts to launch an offensive next day and target Indian military installations in Jammu and Kashmir was thwarted by an alert IAF. In the aerial skirmish, Wing Commander Abhinandan Varthaman, flying a MiG-21 Bison fighter plane, shot down a much-advanced F-16 of the Pakistan Air Force (PAF). However, chasing Pakistani jets, Wing Commander Varthaman crossed over to PoK where his aircraft was hit. He was taken into custody by Pakistan.

Wing Commander Varthaman was released by Pakistan on March 1 after intense diplomatic pressure and his return to India was watched on television sets across the country. He was later awarded the third-highest wartime gallantry award Vir Chakra.