The entire rapid test can be conducted in an ultra-low-cost portable device with the test results being available on a customized smartphone application. 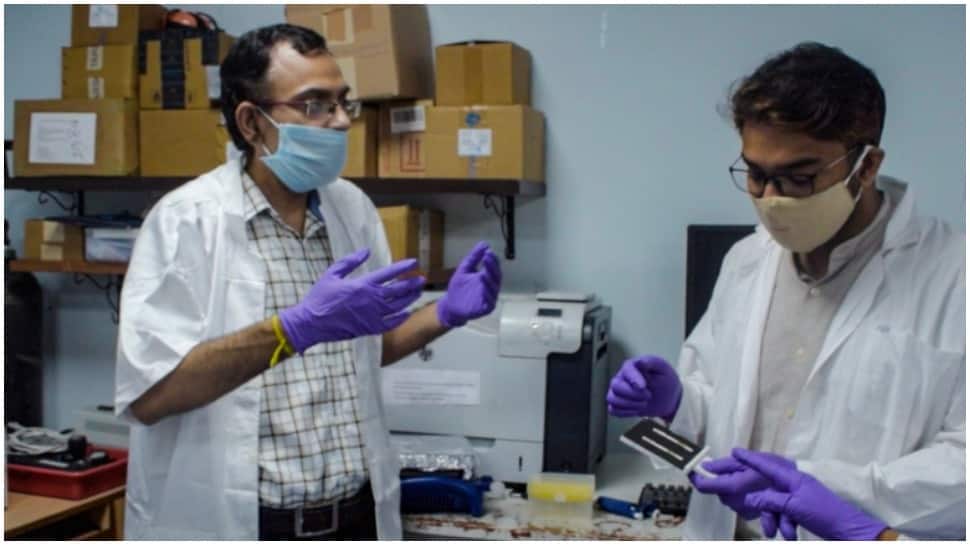 Kharagpur: Researchers at IIT Kharagpur in West Bengal have developed a novel portable rapid diagnostic device for quick testing of coronavirus that will reportedly cost around Rs 400 per test and would take less than 60 minutes.

The entire rapid test can be conducted in an ultra-low-cost portable device with the test results being available on a customized smartphone application.

The device is capable of conducting the detection of the viral genomic RNA in an ultra-low-cost portable enclosure as an alternative to highly expensive RT-PCR machine. The technology essentially deploys a disposable simple paper-strip for chemical analysis and visualization of results.

"The same portable unit can be used for a large number of tests, on mere replacement of the paper cartridge after each test," said IIT Kharagpur

VK Tewari, Director, IIT Kharagpur, said, "This unique innovation is aligned with the Institutional vision to develop high-end healthcare technologies that can be afforded by the ailing common people all around the globe at virtually no cost, and is likely to make a significant breakthrough in global viral pandemic management."

He also said, "We have filed a patent. Hoping speedy commercialization of this novel affordable virus testing technology which will free our healthcare community from expensive labs and cater to the underserved community."

We have filed patent. Hoping speedy commercialization of this novel affordable virus testing technology which will free our healthcare community from expensive labs and cater to the underserved community.https://t.co/Xc5nN8pnMP

Professor Suman Chakraborty said, "In assessing the utility of a specific method of disease detection, there is a common failure to recognize that the cost of the test kit may not turn out to be the most critical factor from the viewpoint of affordable diagnosis, unlike what is being commonly portrayed. Rather, the greater challenge is a complete elimination of the need for any specialized infrastructure and ensuring the possibility of conducting tests at a large scale at low cost without compromised accuracy.

He added, "In that light, the RT-PCR based tests suffer from a compelling constraint of requiring an elaborate laboratory-infrastructure and support system including the operational and maintenance cost, to perform the test. The alternative existing approaches to these tests, on the other hand, are either invasive (blood tests) and non-indicative of an early stage of development of the infection, or dependent on reagents that are extremely unstable and cannot be implemented in resource-limited settings."

Dr Arindam Mondal opined, "The unique portable device developed by the IIT Kharagpur researchers has not only been validated for the diagnostics of COVID-19 but also been designed to be capable of detecting any other kind of RNA virus by following the same generic procedure. The impact of this, therefore, is long-lasting, empowered by the capability of detecting unforeseen viral pandemics in the coming years that may potentially endanger human lives time and again."