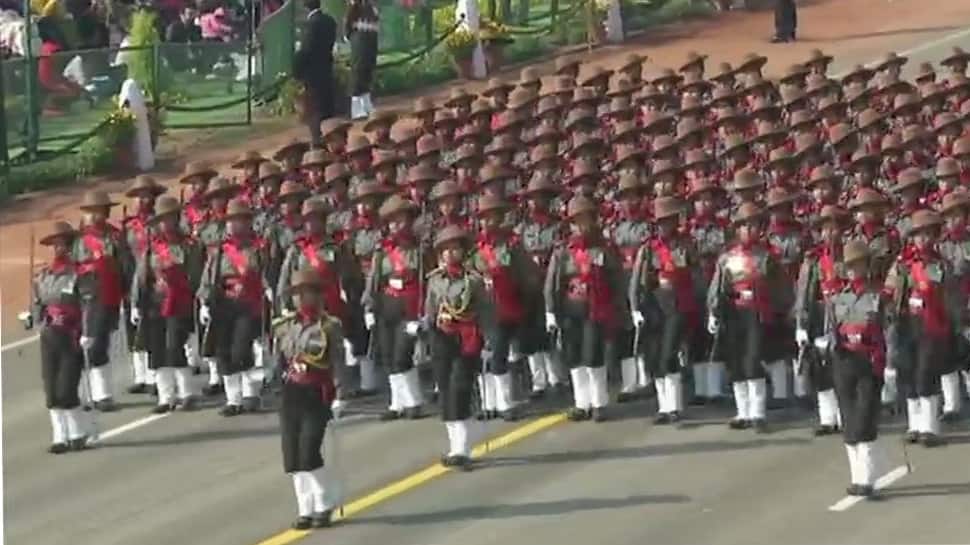 New Delhi: Four veterans of the Indian National Army (INA), an all-women contingent of the 183-year-old Assam Rifles marching down Rajpath and an IAF aircraft flying using a mix of traditional and biofuel on Saturday, were among the many firsts for a Republic Day.

The four INA veterans, aged over 90, rode down the ceremonial boulevard in an open jeep, as a striking black and white portrait of Netaji Subhas Chandra Bose hung from the side of their vehicles. They received a round of applause from the crowd as they passed by.

The INA was an armed force formed by Indian nationalist Rash Behari Bose in 1942 in Southeast Asia during World War II. Later, Netaji took charge of the army to fight against British forces.

The 70th Republic Day parade also saw a dazzling display of 'Nari Shakti' led by an all-women contingent of the Assam Rifles, which created history by walking down Rajpath for the first time.

Maj Khushboo Kanwar, 30, and mother of a child, who led the contingent of the Assam Rifles, the oldest paramilitary force in the country, was brimming with pride.

"Leading an all-women contingent of the Assam Rifles was a matter of great honour and pride for me. We practiced very hard...I am a daughter of a bus conductor from Rajasthan and if I can accomplish this, then any girl can fulfil her dream," she told PTI.

But, it wasn't the only first for women, as Capt Shikha Surabhi from the Corps of Signals performed bike stunts alongside her male teammates as part of daredevils team. And, firsts were created this Republic Day not just on ground but also in air.

During the flypast segment, IAF's An-32 aircraft flews in a 'vic' formation, whose lead plane was flown using a mix of traditional and biofuel for the first time during the parade, a senior IAF official said.

The An-32 (Satluj) formation also exhibited India's quest to seek alternative sources of fuel. The lead aircraft of the formation, was flown utilising Aviation Turbine Fuel blended with 10 per cent biofuel, the senior official said.

The biofuel has been extracted from Jatropha plant seeds using a technology patented by the Council of Scientific and Industrial Research (CSIR) and the Indian Institute of Petroleum, Dehradun, the IAF said.

For the first time, Shankhnaad, a military tune composed by an Indian classical music exponent based on a poem penned by a Mahar Regiment veteran, was also played during the parade.

The combination of military bands of the Sikh Light Infantry, Mahar Regiment and the Ladakh Scouts played the tune.

MP Minister Imarti Devi fails to read out Republic Day speech, asks Collector to do so