India aims for a better, stronger neighbourhood, but Pakistan-sponsored terrorism a challenge: MEA

Addressing the media on the completion of 100 days of his government, Jaishankar in a veiled jibe at Pakistan added that India has a unique challenge from one neighbour. He further added that India can't take any step until the issue of cross border terrorism is successfully addressed and "that neighbour becomes a normal neighbour". 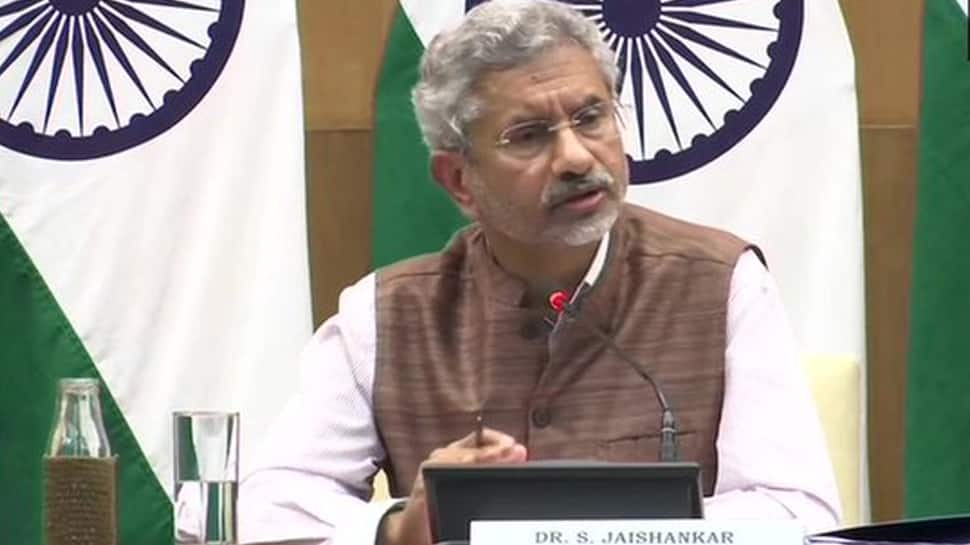 The Ministry of External Affairs (MEA) on Tuesday asserted India's aim to build a better and stronger neighbourhood but added that it would remain a challenge as there is the issue of cross border terrorism from one neighbour.

Addressing the media on the completion of 100 days of his government, EAM S Jaishankar in a veiled jibe at Pakistan added that India has a unique challenge from one neighbour. He further added that India can't take any step until the issue of cross border terrorism is successfully addressed and "that neighbour becomes a normal neighbour".

"We hope to build a better, stronger neighbourhood but recognising that we have a unique challenge from one neighbour until the issue of cross border terrorism is successfully addressed & that neighbour becomes a normal neighbour that would remain a challenge," said the EAM.

Slamming Pakistan, Jaishankar reiterated that the issue with Pakistan is not the scrapping of Article 370 but the country's terrorists and India must make the world realise that. He further said, "I always ask other people show me anywhere else in the world where any country conducts terrorism openly against its neighbour as part of what it considers its foreign policy." The EAM added that he will meet Pakistan Foreign Minister Shah Mahmood Qureshi on the sidelines of United Nations General Assembly (UNGA).

"With regard to Pakistan, the issue is not Article 370 but Pakistan’s terrorists. We must make the world realise. I always ask other people show me anywhere else in the world where any country conducts terrorism openly against its neighbour as part of what it considers its foreign policy. I will meet the Pakistani Foreign Minister on the sidelines of UNGA," he said. He added that Pakistan-occupied Kashmir (PoK) is a part of India and one day India will have physical jurisdiction over it.

Speaking on the issue of Kulbhushan Jadhav, "Our objective was to seek access to him, to ascertain his well-being. Seeking access to him was one step in eventually providing that remedy which ICJ has mandated and finally finding a solution which would bring an innocent person back to his country. We had to look at a variety of factors & see what's the importance you put at this time to ascertaining his well being. We thought ascertaining his well being is a priority issue at this point & we wanted to begin proceedings however unsatisfactory they may be. Whether the Pakistanis carried out in letter & spirit what the International Court of Justice wanted them to do, I think is obvious to all."

On his first press conference after taking office, Jaishankar said that the work of the MEA had started from the very first day. "We toured many countries from which will benefit. Our policy is different. Now there is a link in what we are doing in our home and our diplomacy abroad. We are serious about the defence of our country," added the EAM.

Jaishankar called Prime Minister Narendra Modi's Houston event in the US "a great achievement of Indian-American community". PM Modi will be addressing a community event, "Howdy Modi! Shared Dreams, Bright Future", in Houston on September 22 for which he has sought thoughts and ideas from the people for his speech.

"I regard this as a great achievement of the Indian-American community. If today there is an event of this size and you have President Donald Trump coming there, it shows where that community has reached, how it is regarded in the US, and the respect it commands there. I think it is a matter of great honour that he has chosen to come there, to accept the invitation from the community to be there," said Jaishankar.

The EAM also spoke about the border tensions between India and China in Ladakh on September 11 when there was a face-off between soldiers of both the countries. The incident took place at the Line of Actual Control  (LAC) near the northern bank of the Pangong Tso Lake. However, the face-off was over after delegation-level talks between two sides took place in Ladakh.

Jaishankar clarified that there was no skirmish but a face-off. However, it was resolved. "It happened because there are differing perceptions of Line of Actual Control, patrols meet&sometimes that kind of situations happen. There are mechanisms to address such situations and in this particular case the mechanism kicked into play and they did address the situation."

Mumbai: Minor boy stabs tuition teacher to death over her spat with his mother