Addressing the 25th session of Conference of Parties (COP) under the UN Framework Convention of Climate Change in Spain's Madrid, Javadekar said that India is `walking the talk` in its climate change commitments. 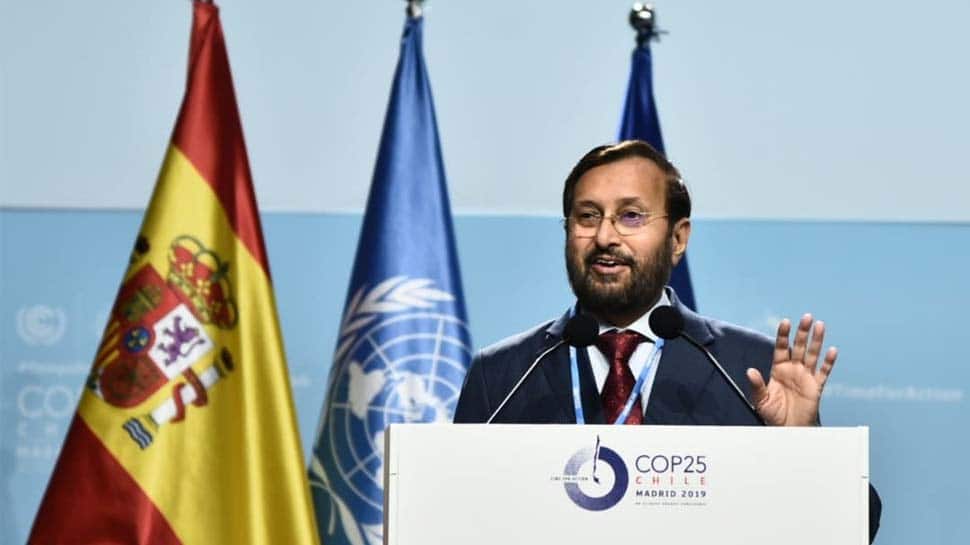 Addressing the 25th session of Conference of Parties (COP) under the UN Framework Convention of Climate Change in Spain's Madrid, Javadekar said that India is `walking the talk` in its climate change commitments. "Climate change is real. The world recognised it and adopted a comprehensive agreement in Paris. Let us concentrate on the implementation of the Paris Agreement and not digress. If there is an inconvenient truth in the form of climate change, we are providing a convenient action plan. We are walking the talk," Javadekar said.

Highlighting the steps taken by the government to tackle the challenges of climate change, Javadekar said, "Prime Minister Narendra Modi announced 175 Giga Watts targets for renewables under Paris Agreement. We have already achieved 83 Giga Watts. Prime Minister has subsequently increased the target to 450 Giga Watts at the recent UN Climate Action Summit. We are simultaneously progressing on solar, biomass and wind energy."

"We have put a carbon tax on coal production at a rate of $6 per tonne. Even with 36 parties represented in Parliament, we could achieve this unanimously. The headline is that a commercial flight was operated on 100 per cent biofuel and we are targeting blending of 20 per cent ethanol in petrol by 2030. We have leapfrogged from Bharat Standard IV to Bharat Standard VI for vehicle emission norms and from April 1, 2020, vehicles will be BS-VI compliant," he added.

"360 million LED bulbs have been fitted in homes, and 10 million conventional streetlights have been replaced with LED lights. There is also a strong push for use of e-vehicles by introducing multiple policy interventions and incentives. We have provided 80 million LPG gas connections replacing conventional firewood cooking stoves. Our cooling action plan and adaptation plan are working well and will achieve our targets. We have promised the creation of additional carbon sinks of 2.5 to 3 billion tonnes of carbon equivalent through increasing green cover. In the last five years, our green cover has increased by 15,000 sq.km. We are undertaking special projects like urban forests, school nursery, agroforestry, water and fodder augmentation in the forest area," the Union Minister added.

Asserting that India prioritises adaptation as an integral part of climate actions, he added that India will be investing about $50 million in water conservation. "India has taken up a target for the restoration of 26 million of degraded land by 2030 during the 14th COP of UN Convention to Combat Desertification in Delhi. This is one of the largest programs in the world to ensure the carbon sink in land resources. 100 per cent neem coating of urea fertilizer is appreciated by the world and 170 million soil health cards are taking care of the soil health, thus creating more carbon sinks," he said.

Announcing that only six countries are on track to meet their NDCs announced in Paris, he said, "We are leading the pack. A sustainable lifestyle is a part of the ethos of India."