The Indian Army team lifts Sudan Polo Cup, one the most prestigious polo tournament, beating beats British Army team on Friday. The match took place at the Jaipur Polo Grounds in Delhi between the both the polo teams. 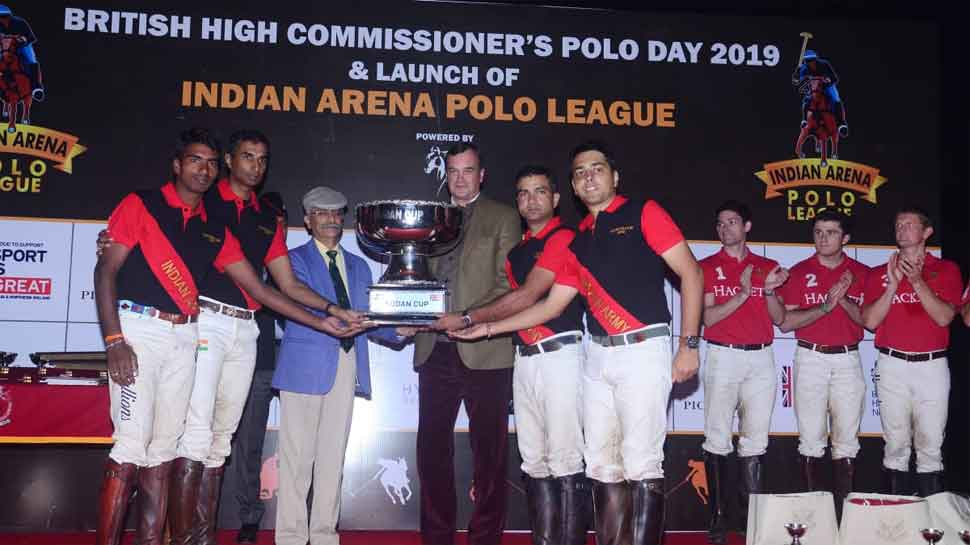 The Indian Army team lifts Sudan Polo Cup, one the most prestigious polo tournament, beating beats British Army team on Friday. The match took place at the Jaipur Polo Grounds in Delhi between the both the polo teams.

In a well-contested match, the Indian team won the match by 5-3 following which Vice Chief of Indian Army Lieutenant General Manoj Mukund Naravane felicitated the teams.

The Sudan Cup is one of the most prestigious polo tournaments, played between the British Army and the Indian Army alternately in India and UK. It was instituted in 1922.

After Independence, this cup could not be played until it was revived in 1971 when an Indian Army polo team visited England and had been regularly contested till 1998.

After a lapse of 21 years the Sudan Polo Cup has been revived and played at Jaipur Polo Ground between visiting British Army Polo team and host Indian Army Polo team on Friday.

The match started off with both the Army teams trying to outwit other but there were no goals till half chukker, a playing period of a polo game. After the teams returned after changing the ponies, Col. Ravi Rathore bagged the first goal and then Capt. John Douglas Sleeman made the score equivalent of one each.

In the second chukker gets Colonel Ravi Rathore bracketed the second goal. There was a 40-yard penalty in favour of British team and Gaston Devrient captured the opportunity and the team scored the second goal. Lt. Col. Vishal Chauhan thereafter made another moving ahead in the game. Capt. Raghav Raj Singh made fourth and fifth goal for the team.

In the last, the British Army scored a goal. Indian team won the match with 5-3.

Women contribute to the country's GDP and yet they are being killed: Congress' Renuka Chowdhary