The border tension between the two nations escalated on June 15 when 20 Indian Army personnel were martyred after violent clashes with Chinese troops along the Line of Actual Control (LAC) in Galwan Valley of eastern Ladakh. 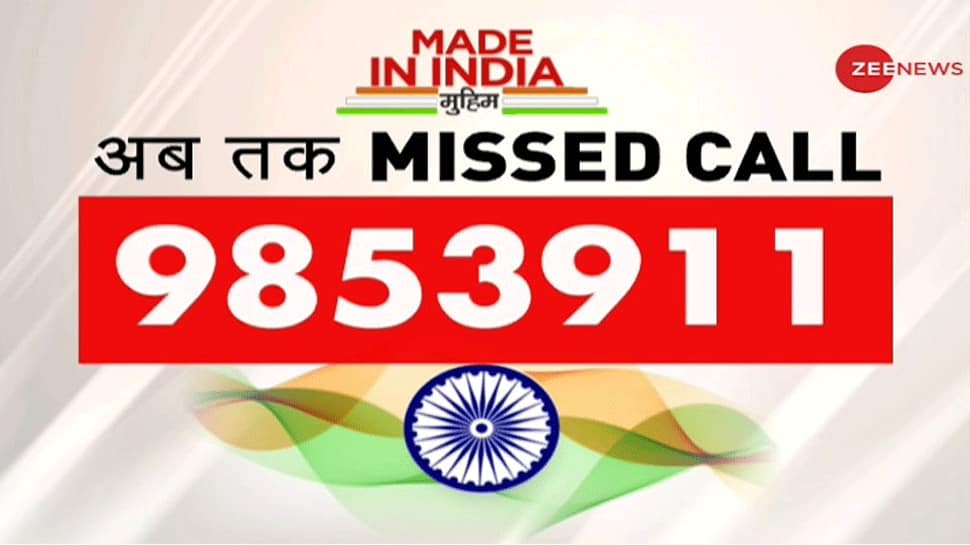 NEW DELHI: As tension between India and China continues to simmer, Zee News on Tuesday decided to provide a platform to its viewers through which the people can express their sentiments and voice their opinions. The border tension between the two nations escalated on June 15 when 20 Indian Army personnel were martyred after violent clashes with Chinese troops along the Line of Actual Control (LAC) in Galwan Valley of eastern Ladakh.

In this Made In India campaign, any Indian can make their voice heard by being a part of this initiative. Zee News brings you this number, 7834998998, on which anyone who wants to boycott China-made goods and promote Made In India, can give a missed call. This is the world's largest platform against China.

It may be possible that when some of you give a missed call on this number, you may not hear the sound of the bell. But this doesn't mean that your missed call hasn't been recorded. Over 99 lakh 03 thousand calls have been made till July 29, 2020.

As soon as a person gives a missed call on this number, an SMS will come from Zee News on their mobile phone, which is proof that their opinion has been recorded. By clicking on the link given in this SMS, they can take part in a survey. Zee News has prepared a questionnaire on how people can answer China and once the link is clicked, the questionnaire can be answered with the help of which viewers can reach us at Zee News.

This will be the biggest survey against China and a person must be a part of it. For this survey, we will take the help of ChatBot. This is a survey based on Artificial Intelligence (AI) technology. Chat here means conversation and Bot means Robot i.e. a robot that can talk to you. Therefore, you too can register your opinion with the help of this ChatBot.

Globally, any technology that handles a large number of phone calls can handle a maximum of 5,000 calls per minute. This means the campaign of Zee News has garnered maximum missed calls. This may be the reason why many people may not be able to give a missed call but be patient because this campaign is for building a new India.

The population of India is currently 137 crores and if all the Indians raise their voice against China together, it'll echo all over the world. The entire world will hear what we Indians think about China. The real power of India is hidden only in the number of India and we can beat a big country like China only using numbers. A person will become part of this campaign of Zee News as soon as he or she gives a missed call on the number.

China is currently fighting a war against India that cannot be fought without the people of the country. Therefore, you have to decide whether you want to put this responsibility on the shoulders of the army and the government or you want to play a strong role in it too.