The posters have allegedly been put up by the Students Federation of India (SFI). However, the SFI has distanced itself from the poster and has condemned the incident. 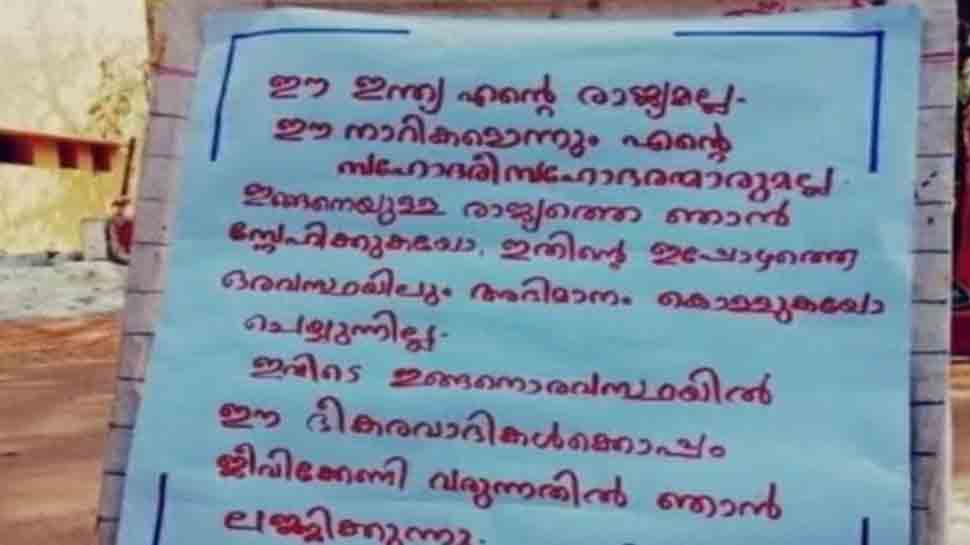 Kannur: Kerala Police have registered a case after posters that read, "India is not my country," surfaced in Thalassery's Government Brennen College and the Government ITI college in Kannur, Palakkad on Friday evening. The posters have allegedly been put up by the Students Federation of India (SFI). However, the SFI has distanced itself from the poster and has condemned the incident.

"SFI believes in democratic protest and upholds constitutional values. Such posters are against the idea that the SFI represents. The posters are of religious extremism in nature. Our organisation openly takes a strong stand against such tendencies. If any SFI worker is connected with these posters, we will take strong action," said state secretary of SFI KM Sachin Dev.

The poster which is written in Malayalam, reads, "This India is not my country. These scoundrels are not my brothers and sisters. I do not love a country like this nor do I take any pride in this country in the present situation. I feel ashamed to live with these terrorists in such an atmosphere in India.''

Dharmadom Sub-Inspector Mahesh said, "We have registered a case under Section-153 of Indian Penal Code (IPC) (that deals with wantonly giving provocation with intent to cause a riot). An investigation is on in the case, and we are trying to find out as to who put these posters up."

A case has also been registered by the Malampuzha Police for posters put up in Government ITI in Malampuzha.