Anti-CAA protests swell across India; six deaths in UP, violence in Delhi 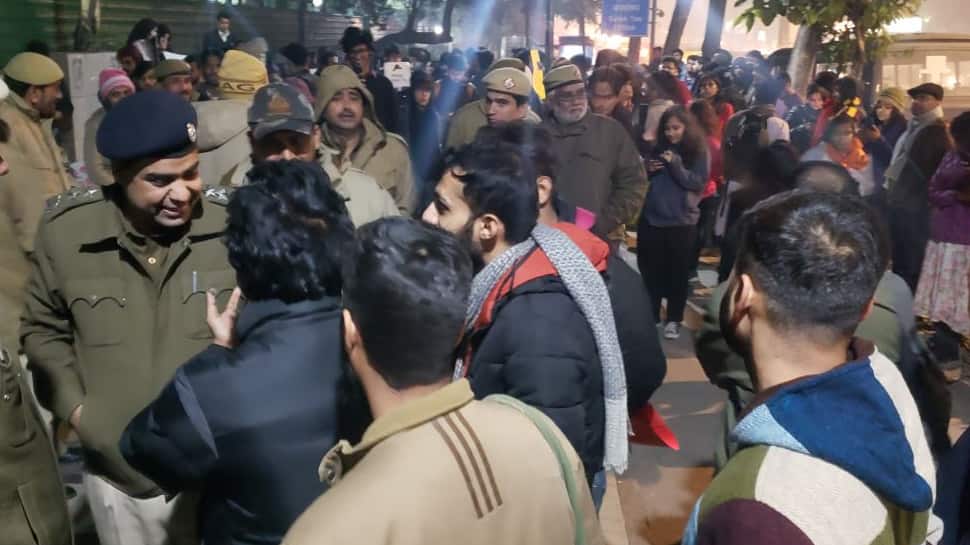 NEW DELHI: Six people died and dozens were injured on Friday as police clashed with thousands of protesters across several states as they continued to oppose the Citizenship Amendment Act, which they say discriminates against Muslims. Violent clashes with police rocked Uttar Pradesh from Gorakhpur to Bulandshahr on Friday while thousands rallied in the national capital with Tricolour and 'Save Constitution' banners to protests against the amended citizenship law and the proposed National Register of Citizens.

With the protests turning violent an the opposition mounting attack on the ruling dispensation, the government indicated that it was ready to accept suggestions. However, ahead of that the anti-CAA violence killed two people in Bijnor, one in Kanpur, one in Firozabad and another one in Sambhal. On Thursday, three people died during the anti-Citizenship Amendment Act violent protests. Two persons died in Karnataka's Mangaluru and another one died in UP's Lucknow.

People protesting against the amended citizenship law have given a call for a bandh in Ranpur for Saturday amid the police taking over 150 people in preventive custody in the last two days. Rampur Superintendent of Police Ajay Pal Sharma said the police have also sought property details of around 250 people who have provoked tension or are suspected to do it in the coming days. "Once we get these details and cases are investigated, their properties will be attached for their attempt to fan violence," Sharma said. Schools and colleges will remain closed on December 21 in Gautam Budh Nagar in view of the protests.

Till the time,this black law is not withdrawn, the protest will continue. Since afternoon, the protest has been going on peacefully. People from the administration had entered Jama Masjid and lathi-charged people in the day: Bhim Army Chief Chandrashekhar Azad at Delhi's Jama Masjid.

Curfew relaxed for 16 hrs tomorrow from 6 AM to 10 PM in Dibrugarh district. Restriction imposed on all country spirit shops and other establishments retailing liquor has also been relaxed. Sale of liquor will be allowed only from 12 noon to 4 pm: Assam government.

Madhya Pradesh: Internet services have been restored in Bhopal.

Bhim Army Chief Chandrashekhar Azad present at Jama Masjid. Earlier today, police had tried to detain him, during protest at Jama Masjid against Citizenship Amendment Act but he was taken out of the spot by his supporters.

Gujarat government has imposed Section 144 (prohibits assembly of more than 4 people in an area) in Rajkot till 1 January, 2020.

Kerala government has stayed all the activities connected with the updation regarding National Population Register (NPR).

Anti-CAA protesters assemble at Delhi Police headquarters in ITO, demand immediate release of those detained by the police.

While protesters were being pushed back, a private car parked at Subhash Marg, Darya Ganj was set ablaze. The police staff immediately doused the fire.\Some police personnel incl senior officers were injured in stone-pelting. Around 40 persons have been detained: Delhi Police

In the evening, suddenly some anti-social elements in the gathering started breaking the barricades and indulged in stone-pelting in a bid to march towards Jantar Mantar against the police advice. Police used water cannon and absolutely minimum force to push them back: Delhi Police

Citizenship Act and NRC are against the poor. The poor, they will be most affected by it. What will the daily wage labourers do? Demonstrations should be held peacefully: Priyanka Gandhi Vadra at India Gate

Delhi Police PRO, MS Randhawa on protest at Jama Masjid: Protest going on since morning was peaceful. Around 6.30 pm, some outsiders came here and started pelting stones. We used water cannon. People were pushed back. Some policemen received injuries. Some people have been detained.

Properties worth Rs 88 crore damaged so far in violent protests against anti-Citizenship in West Bengal.

Internet services in Uttar Pradesh's Ghaziabad to remain suspended till 10 am on December 21. All schools to stay closed: District Magistrate

A spokesperson of Ministry of Home Affairs shares a detailed tweet, explaining all the provisions pertaining to citizenship in India.

A thread explaining the provisions pertaining to #Citizenship in India and some concerns regarding the #CAA2019:#CitizenshipAmendmentAct

Uttar Pradesh TET examinations suspended due to anti-Citizenship protests. The examinations were scheduled to be held on December 22.

Zomato and Dominos suspends its services in part of Delhi due to CAA protests.

Entry and exit gates at all stations, except Jama Masjid, Jaffrabad and Maujpur-Babarpur have been opened: DMRC

All entry and exit gates of Kashmere Gate are open. Entry is permitted at Rajiv Chowk: DMRC

Finance Minister Nirmala Sitharaman on Mamata Banerjee's remark on Citizenship Act: We never wanted a 3rd party or international fora's interference in our affairs. On a completely domestic matter she has chosen to ask for UN. Does she have no faith in institutions of India? I totally condemn her statement. And it is irresponsible of a chief minister to talk like that.

Total six people have been killed in violent protests against Citizenship Act, one on December 19 and five on Dec 20, across Uttar Pradesh.

In a democracy people have right to raise their voice against policies of govt®ister their concerns. BJP govt has shown utter disregard for people’s voices&chosen to use brute force to suppress dissent: Sonia Gandhi

Congress Interim President Sonia Gandhi: In a democracy people have right to raise their voice against policies of govt&register their concerns. BJP govt has shown utter disregard for people’s voices&chosen to use brute force to suppress dissent. #CitizenshipAmendmentAct pic.twitter.com/ycMph7Eib4

Visuals: Heavy security deployed in Delhi's Daryaganj area due to the ongoing protest against Citizenship Act.

Delhi: Heavy security deployed in Daryaganj area due to the ongoing protest against #CitizenshipAct https://t.co/TJF4uDbdKa pic.twitter.com/5OsjMq4mGC

Gate no. 3 and 4 of Kashmere Gate have been opened: Delhi Metro Rail Corporation

Delhi: Car torched in Daryaganj during protest over #CitizenshipAct pic.twitter.com/2o4tkDXZO6

The protest at Delhi Gate in Daryaganj is turning violent. Stone pelting has been going on in Delhi Gate for sometime now.

Delhi: Gate no. 3 and 4 of Kashmere Gate metro station have been opened.

Maharashtra CM Uddhav Thackeray in Nagpur: I appeal to people of Maharashtra to maintain peace and calm. Maharashtra government will ensure that no one's rights are snatched away.

After the prayers in UP's Bahraich district, people opposing the Act pelted stones at the police. To disperse the crowd, the police resorted to lathi-charge and opened tear gas. A tense situation persists in the area and heavy force has been deployed at the site of the incident near Ghantaghar Chowk. Thousands of people took out a march even after the implementation of Section 144 in the district.

The entry and exit gates of Kashmere Gate and Central Secretariat have also been closed. Interchange facility is available at these stations.

Protests being majorly backed by 59 political parties who have moved Supreme Court against the CAA. Internet was blocked in certain areas on Thursday looking at law and order situation as people had started gathering near Red Fort. Those who have objections to CAA can give their suggestions to the MHA, it will be incorporated as the rules are yet to be framed: Senior government official.

Protests intensify in several parts of Uttar Pradesh including Bulandshahr, Firozabad and Meerut. Violent protest in Uttar Pradesh's Bulandshahr as demonstrators pelted stones on cops and set fire to a police van. The cops fired tear gas and resorted to lathi-charge.

Mangaluru South Police: 6 or 7 Kerala journalists were detained today in the morning. All of them were released half an hour ago.