Uttarakhand CM Tirath Singh Rawat has reportedly conveyed his decision to BJP National President JP Nadda in today's meeting. According to sources, he may make a big announcement during a media briefing shortly. 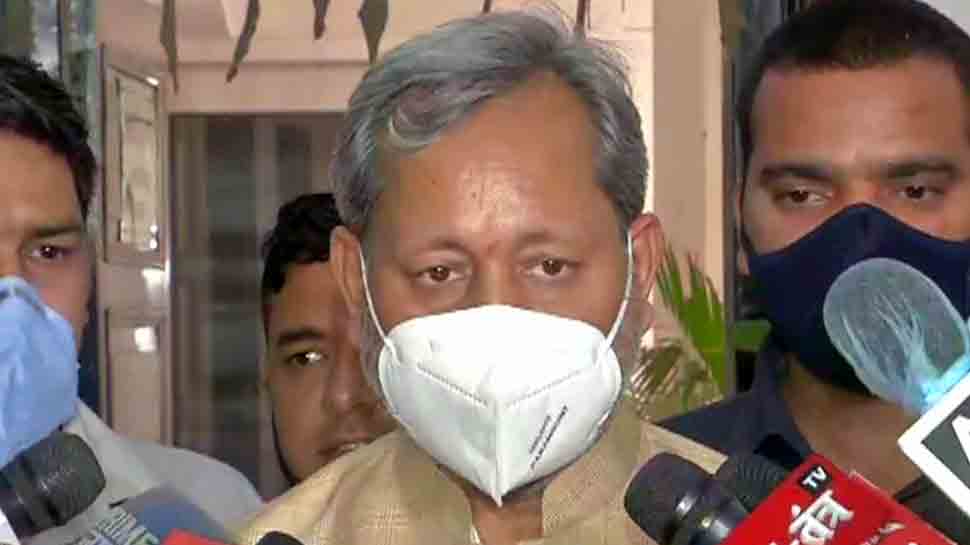 The Uttarakhand BJP will hold its legislature party meeting here on Saturday amid reports that Tirath Singh Rawat is resigning as chief minister. The meeting will be chaired by Uttarakhand BJP president Madan Kaushik at the party headquaters at 3 pm on Saturday, state BJP media incharge Manveer Singh Chauhan said.

Meanwhile, Chief Minister Tirath Singh Rawat on late Friday arrived at the Raj Bhawan where he submitted his resignation to the Governor.

Earlier in the day, Tirath Singh Rawat held a press conference at the state secretariat here, after his return from Delhi after meeting the party's central leadership. However, contrary to expectations, he did not say anything about the speculation in the media about a change of guard in the state and confined himself to talking only about steps taken by his government to give relief to different sectors, including transport and tourism, which were hit badly by the COVID pandemic.

Thank you for staying with us.

Tirath Singh Rawat had replaced Trivendra Singh Rawat on March 10 after he was similarly asked by the party to step down.

Rawat handed over the resignation letter to Governor Baby Rani Maurya on late Friday, hours after returning from Delhi where he was summoned by the top BJP leadership on Wednesday.

Uttarakhand: BJP legislature party meeting is scheduled to be held at 3 pm on Saturday at the party headquarters. The meeting will be held under the chairmanship of state president Madan Kaushik, says State's media in-charge Manveer Singh Chauhan

Section 151A of the Representation of People Act, 1951 mandates the Election Commission to fill vacancies in Parliament and the state legislatures through bypolls within six months from the date of their occurrence, provided that the remainder of the term of a member in relation to a vacancy is one year or more.

According to the Constitution, Rawat, an MP from Pauri Garhwal who was sworn in as CM on March 10, needs to become a member of the state assembly before September 10 to continue in office.

Given the possibility that the Election Commission may not hold a bypoll in the state can lead to constitutional crisis. Rawat needs to be elected as an MLA in the next two months to continue in the post, which he got after the BJP leadership removed Trivendra Singh Rawat from the helm. But observers say with the term of the assembly in any case coming to an end in less than a year, the EC may not order a bypoll for the vacant seats in Uttarakhand.

Uttarakhand, for quite some time, has been abuzz with speculation over another leadership change barely four months after Tirath Singh Rawat took an oath. G

If sources are to be believed, Uttarakhand Chief Minister Tirath Singh Rawat has apparently written a letter to Bharatiya Janata Party (BJP) national president JP Nadda offering to resign from his post, citing a constitutional crisis in the state. "I want to resign from the post of Chief Minister so that there is no constitutional crisis in Uttarakhand," Tirath Singh said, sources say. The names of Dhan Singh Rawat and Pushkar Dhami have emerged as frontrunners in the race for new CM, sources in the party also informed.

Uttarakhand CM Tirath Singh Rawat is likely to address a press briefing shortly amid reports of him tendering his resignation. However, there is no official confirmation on the same.

Uttarakhand remained abuzz with speculation that the BJP could pick a new leader as the CM of the state.

If CM Rawat quits to pave the way for another person, an MLA most probably, then he would have held the post for less than four months after the party brought him to replace Trivendra Singh Rawat.

Without commenting on the speculation about his fate, CM Tirath Singh Rawat told reporters the party will take a call about its political strategy in the state, and noted that holding or not holding the bypoll is the EC's prerogative.

Uttarakhand Chief Minister Tirath Singh Rawat met BJP president JP Nadda amid increasing buzz that the party may again go in for a change in the leadership in the state as the prospect of the Election Commission holding an assembly bypoll there looks uncertain.

To prevent profiteering or commercialisation, private schools asked to charge fees after a deduction of 15% in overall fees. Schools directed to refund or adjust the fees if they have charged the full amount: Delhi Government

Police raided a house at a village in Pattapur area of Ganjam district on June 30 & recovered 3157 kgs of ganja. During interrogation, the house owner said that he was receiving Rs 30,000 per month from some persons for storing the contraband: Ganjam Police

Ministry of Electronics and IT has approved 14 eligible applicants under the Production Linked Incentive Scheme (PLI) for IT hardware. The target segments under the PLI Scheme for IT Hardware include laptops, tablets, all-in-one personal computers and servers. (ANI)

NIA conducted searches at nine locations in Barnala, Moga, Ferozepur in Punjab and Meerut and Muzaffarnagar in UP in connection with a case related to threatening and extorting money by Khalistani Terrorists at Mehna, Moga, Punjab.

The Central Bureau of Investigation has arrested Pawan Kumar, an employee of Power Development Department, Jammu (J&K), for demanding and accepting a bribe of Rs. 6,000/- from the complainant.

Rainfall over the country as a whole is most likely to be normal, as per IMD's forecast for July.

Rainfall over the country as a whole is most likely to be normal, as per IMD's forecast for July pic.twitter.com/G4J1s5Ugdh

I ask you all to follow COVID appropriate behaviour with more awareness. These days, people from medical fraternity are coming forward to promote Yoga. Many modern medical science institutions are doing studies on how yoga is helping in fighting post-COVID complications: PM Modi

Today, our doctors are making and implementing protocols for COVID-19. Earlier, we all saw how medical infrastructure was ignored. Despite all problems, India’s condition was somewhere stable than other developed countries: PM Modi

"I pay tribute to all the doctors who have laid down their life in fight against Covid. My condolences to their families," PM Modi says.

We have come up with a Credit Guarantee Scheme of Rs 50,000 crores to strengthen the health infrastructure in such areas, where there is a lack of health facilities: PM Modi

Our doctors, their knowledge and experience is helping us battle this COVID19 virus. Budget allocation for the health sector has been doubled: PM Modi's address on Doctors Day 2021

We had 2 clear agendas - restoration of Article 370 and 35A and full-fledged statehood for Ladakh. We discussed these with Union Home Minister for 2.5 hours. More meetings are to be followed to discuss this: Asgar Ali Karbalai, Congress & Kargil Democratic Alliance (KDA)

Our agenda focussed on the restoration of Article 370 & 35A. We also told that we were against division but were in favour of the state. We don't consider UT. We also discussed development: Qamar Ali Akhoon, Jammu and Kashmir National Conference & Kargil Democratic Alliance (KDA) pic.twitter.com/CcKpQBC374

Our agenda focussed on the restoration of Article 370 and 35A. We also told that we were against division but were in favour of the state. We don't consider UT. We also discussed development: Qamar Ali Akhoon, Jammu and Kashmir National Conference and Kargil Democratic Alliance (KDA)

Senior Punjab Congress leaders from urban areas including group of Cabinet Ministers in a meeting with Chief Minister Captain Amarinder Singh at his residence in Chandigarh.

Senior Punjab Congress leaders from urban areas including group of Cabinet Ministers in a meeting with Chief Minister Captain Amarinder Singh at his residence in Chandigarh pic.twitter.com/3lSN5lPpTz

DMRC-MD Dr. Mangu Singh and Chief Medical Officer, Gurugram Dr Virender Yadav today inaugurated a vaccination centre at HUDA City Centre station. The centre has been opened to facilitate citizens to get their vaccination done for free without any registration or slot booking: DMRC (ANI)

Supreme Court issues notice to Centre, West Bengal government and Election Commission of India on a plea seeking SIT probe to investigate into causes and reasons of post-poll violence in West Bengal. (ANI)

If there is zeal for innovation, there is passion for its quick adaption in the country. This is why Digital India is India's resolution, the practice of Atmanirbhar Bharat. Digital India is the 21st century's slogan of India's strength: PM Modi

PM Modi interacting with beneficiaries of Digital India said, "Whether it's issuance of driving license, or birth certificate or payment of electricity bill, water bill, or income tax return, these can now be processed via Digital India platform faster & easily now...Even in villages, these things are being done through CSC centres."

"This decade is going to enhance India's capabilities in digital technology and its share in the global digital economy. That's why top experts are looking at this decade as 'India's Techade'," he added.

Tibetans in exile staged a protest against the Chinese Communist Party outside Chinese Embassy. They were later detained by Police.

Delhi: Tibetans in exile staged a protest against the Chinese Communist Party outside Chinese Embassy.

They were later detained by Police. pic.twitter.com/Onz1TAWxpA

Congress tradition of holding session on debates and dialogue has ended today. I feel sad about it. Introspection meetings are required. Our policies may be wrong, but to make them correct, such sessions are needed: Sushil Kumar Shinde, ex-Union Minister and Congress leader.

Congress tradition of holding session on debates & dialogue has ended today. I feel sad about it. Introspection meetings are required. Our policies may be wrong, but to make them correct, such sessions are needed: Sushil Kumar Shinde, ex-Union Min & Congress leader (29.06) pic.twitter.com/Lh1gf0VRev

PM Narendra Modi interacts with a beneficiary of DIKSHA scheme, Suhani Sahu from Uttar Pradesh, on completion of 6 years of Digital India. PM Modi is interacting with beneficiaries of various schemes of Digital India, via video conferencing.

PM Narendra Modi interacts with a beneficiary of DIKSHA scheme, Suhani Sahu from Uttar Pradesh, on completion of 6 years of Digital India.

PM Modi is interacting with beneficiaries of various schemes of Digital India, via video conferencing. pic.twitter.com/ttwlpEbTaB

A delegation of leaders from Ladakh arrives at the Ministry of Home Affairs (MHA).

Delhi: A delegation of leaders from Ladakh arrives at the Ministry of Home Affairs (MHA). pic.twitter.com/sIVV7yRFyh

We've lost many healthcare workers to pandemic. On Doctors' Day, WHO salutes these bravehearts, their families & frontline workers. WHO will continue to work with countries to invest in health workforce strengthening: Regional Director, WHO South-East Asia Region (ANI)

Zydus Cadila applies for Emergency Use Authorisation (EUA) seeking approval from the Drugs Controller General of India (DCGI) for the launch of their DNA vaccine for 12 years & above. The vaccine has completed the third phase of trial. (ANI)

On this Doctors' Day, I salute all members of the medical fraternity for rendering selfless service and working round-the-clock to save others' lives by risking their own: Vice President M Venkaiah Naidu (ANI)