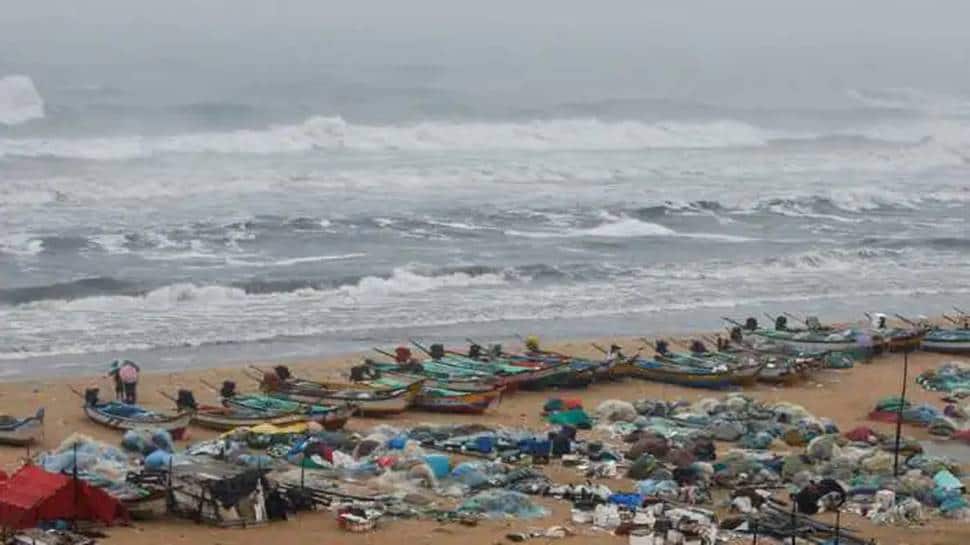 New Delhi: The IMD on Sunday informed that the landfall process of cyclone Gulab has started at 6 PM and it may continue for about three hours. The cyclonic system will likely hit landmass between Kalingapatanam in Andhra Pradesh and Gopalpur in Odisha. "India Meteorological Department (IMD) issued red alert for 'Cyclone Gulab'. South Odisha and north coastal Andhra Pradesh have been issued red alerts for today. Landfall expected late evening/night," said IMD senior scientist RK Jenamani.

#CycloneGulab | The landfall process, which commenced at around 6 pm, will continue for the next 2-3 hours over north coastal Andhra Pradesh and adjoining South Coastal Odisha, says IMD pic.twitter.com/KdViZlTuiU

While in Uttar Pradesh, Chief Minister Yogi Adityanath has announced Cabinet expansion on on Sunday (Sptember 26, 2021) just months ahead of the state Assembly elections. As many as seven new faces will be inducted into Chief Minister’s team. Jitin Prasada takes oath in CM Yogi Adityanath's Cabinet. There are 53 ministers in the UP cabinet at present, and seven more can be inducted as per the constitutional limit. The BJP will be fighting next year’s polls, most likely to be held in February, under the leadership of CM Adityanath.

Meanwhile, Punjab Chief Minister Charanjit Singh Channi's new cabinet's swearing-in ceremony was held at the Raj Bhawan. Channi met Governor Banwarilal Purohit on Saturday with the list of ministers after a meeting with the Congress high command in Delhi.

On the other hand, Prime Minister Narendra Modi arrived at Delhi airport on Sunday (September 26, 2021) after concluding his three-day US visit. BJP president JP Nadda and other leaders of the party greeted PM Modi at the airport. Delhi BJP president Adesh Gupta revealed that a stage has been set up for the grand welcome of the prime minister.

Stay tuned with Zee News for all the latest breaking news updates.

Andhra fiermen death update: There were six fishermen, all residents of Andhra Pradesh's Srikakulam, on the boat, out of which 5 fell in the sea due to strong waves. Out of these 5 persons, three reached ashore safely & said two others have died. One fisherman who was on the boat is still missing. (ANI)

Odisha: Two NDRF teams have been deployed in Gumma & Gosani blocks in Gajapati district in view of Cyclone Gulab

"We have all the equipment needed in situations like Cyclone & flood & will tackle the situation accordingly," Vishwanath Chaudhari, NDRF Team Commander in Gosani pic.twitter.com/qvbOdugVIT

Cyclone Gulab is likely to weaken into 'deep depression' in next 6 hours, says IMD

16,000 villagers have been evacuated from Odisha's Ganjam district due to the cyclone, says PK Jena, SRC, Odisha. pic.twitter.com/salxdkZ4nN

Five fishermen from Andhra Pradesh's Srikakulam fell in the sea after strong waves hit their boat off Mandasa coast while returning from the sea this evening. Police & other officials are trying to rescue them: Govindarao, Sub Inspector, Vajrapukotturu PS

Jitin Prasada, who switched from the Congress to the BJP recently, was on Sunday inducted in the Yogi Adityanath cabinet while six others took oath as ministers of state. The new MOS are Paltu Ram, Chhatarpal Gangwar, Sangeeta Balwant Bind, Dharamveer Prajapati, Sanjeev Kumar Gaur and Dinesh Khatik. The oath was administered by Governor Anandiben Patel at a function in the Gandhi auditorium in the Raj Bhavan in the presence of the chief minister.

I had resigned in protest against three black laws of the Modi Govt and made it clear that I will not be joining the State Cabinet: Congress MLA Kuljit Singh Nagra at Raj Bhavan in Chandigarh pic.twitter.com/p7QgZLlL75

#WATCH | Punjab: Congress MLAs along with their family members reach Raj Bhavan in Chandigarh for the swearing-in ceremony of new ministers pic.twitter.com/SQtSSyl9Ai

The letter which was sent to Punjab Congress chief Navjot Singh Sidhu and Chief Minister Charanjit Singh Channi asked to give representation to a ‘clean Dalit leader’ in the cabinet, PTI reported. Seven Congress leaders including a former PPCC chief wrote to Sidhu demanding not to include Rana Gurjit Singh in Channi's cabinet.

Exclusive list of Punjab ministers whi would be sworn in today. 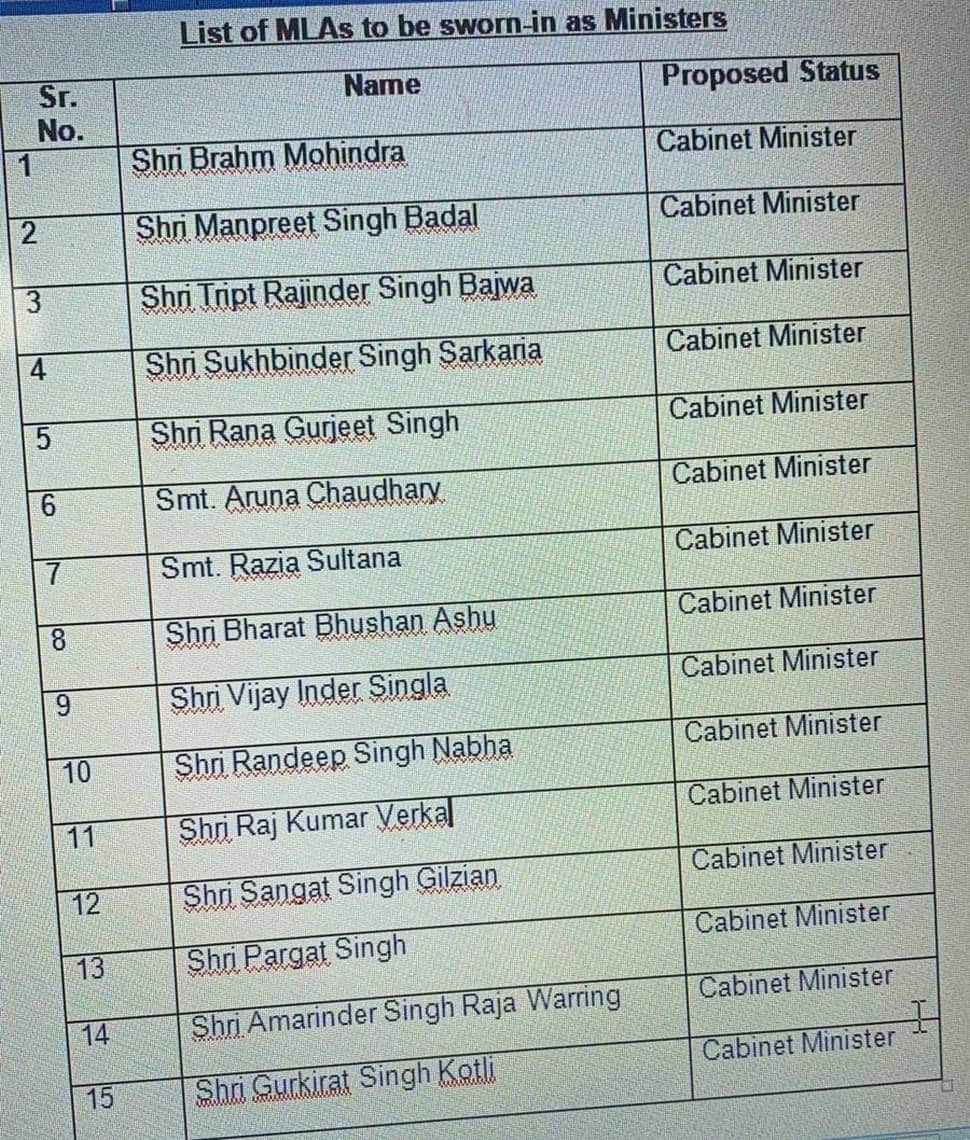 Uttar Pradesh: UP cabinet expansion to be held this evening at Raj Bhavan.

Lucknow | UP cabinet expansion to be held this evening at Raj Bhavan: Sources

New Delhi: "PM Modi's visit to the US proves that the world views India differently under the leadership of PM Modi... On behalf of crores of Indians, we welcome him back," said BJP President JP Nadda.

PM Modi's friendship with US President Joe Biden is not new, they share an old bond. The same was also reiterated by US President: BJP president JP Nadda pic.twitter.com/S5is5W8595

New Delhi: BJP president JP Nadda and other leaders greet PM Narendra Modi, on his arrival from the US, after concluding bilateral and Quad talks.

BJP president JP Nadda and other leaders greet PM Narendra Modi, on his arrival from the US, after concluding bilateral and Quad talks. pic.twitter.com/Tp2qfZ8YV2

Mann Ki Baat: "We must ensure that those who have not been vaccinated around us must get vaccinated. Even after the vaccination, necessary protocols have to be followed. I believe that soon Team India will once again wave its flag in this fight against COVID-19," says PM Modi in his monthly address.

Mann Ki Baat: "The whole country is soon going to celebrate Dussehra, the victory of good over evil. Drawing inspiration from the festival, we must remember our fight against Corona," says PM.

Mann Ki Baat: “Team India is creating daily record in country's fight against Covid-19, especially on vaccination front. I request those who are not yet vaccinated to take their shot. But we cannot let out guard down even after vaccination,” says Prime Minister Narendra Modi.

'One Teacher, One Call' initiative in Uttar Pradesh is commendable. #MannKiBaat pic.twitter.com/WJQhBo5kJi

Mann Ki Baat: PM Narendra Modi hailed the youth of the nation and said, "The youth of our country have decided that they will bring the history of the unsung freedom fighters to the forefront. I urge every citizen to contribute towards the same. You will be filled with courage & enthusiasm to learn that a group of differently-abled people commemorated their journey to the Siachen glacier. This reflects our nation's 'Can Do' attitude & that disability is not the end to achieving your goals."

Mann Ki Baat: "If we look at the life of Mahatma Gandhi, we will learn the importance of Swacchta. He had made cleanliness a mass movement...As we celebrate 75 years of Azaadi Ka #AmritMahotsav, we must not forget the importance of Khadi & its association with our independence. Khadi has always been associated with our independence. As we gear up to celebrate Diwali & other festivals, let's purchase Khadi & Handloom to strengthen Vocal4Local campaign," says PM Modi.

Mann Ki Baat: PM Narendra Modi added, "This electronic auction pertains to gifts presented to me by people from time to time. The money that accrues through this E-auction is dedicated solely to the Namami Gange Campaign."

Mann Ki Baat: “I request people in all corners of the country to celebrate “river festival” at least once per year,” says Prime Minister Modi.

Mann Ki Baat: “A special e-auction of gifts I received is going on these days. The proceeds from that will be dedicated to the 'Namami Gange' campaign,” said PM Modi.

Mann Ki Baat: “On World Rivers Day, I am reminded of the Namami Gange Mission, which is progressing smoothly through people's participation,” says PM Modi.

Mann Ki Baat: We mark so many days, but there is one more day we should celebrate. It is 'World River Day'.

We mark so many days, but there is one more day we should celebrate. It is 'World River Day'. #MannKiBaat pic.twitter.com/Zv6CXgCmjM

Mann Ki Baat: “September 26 is an important day because it is related to Indian tradition and heritage. Today is World Rivers Day,” said PM Modi in Mann Ki Baat.

Jammu and Kashmir: 'Air Show' being held at Dal Lake, Jammu & Kashmir, under the aegis of 'Azadi ka Amrit Mahotsav'.

Odisha: An orange alert has been issued in Odisha and Andhra Pradesh ahead of cyclone `Gulab`, which is approaching the coastal states from the Bay of Bengal and is expected to make landfall on Sunday evening according to the India Meteorological Department.

According to sources, security forces received input that two-three militants are present in a house in the area."Heavy exchange of fire is underway. Further details are awaited," said sources.

Uttar Pradesh: A mathematics teacher was beaten to death by some unidentified assailants in the Rajendra Nagar locality in Jalaun district, and his students are said to be the suspects in the initial probe, said police. The assailants used iron rods to kill the teacher.

The police said that the miscreants had arrived on a bike at the teacher`s house. They first knocked on the door. As soon as the teacher came outside, the assailants hit him on the head with an iron rod. The teacher bled to death. (IANS)

"A cyclonic circulation is likely to form over the northeast and adjoining the East-central Bay of Bengal. In the subsequent 24 hours, it will be a low-pressure area and likely to reach the West Bengal coast around September 29," he said.

Uttar Pradesh:  In view of the upcoming Uttar Pradesh Assembly elections, Congress leader Priyanka Gandhi Vadra is likely to visit Lucknow on Monday on a week-long tour. According to the sources, the All India Congress Committee (AICC) General Secretary will conduct marathon meetings with the party leaders and workers. She will take stock of the party`s poll preparedness in the state. (ANI)

New Delhi: Union Home Minister Amit Shah will chair a high-level meeting with CMs of ten Naxal-hit states in Delhi. The meeting will be held in Vigyan Bhawan where Chief Ministers of all the ten Naxal-affected states- Chhattisgarh, Jharkhand, Bihar, Odisha, Andhra Pradesh, Maharashtra, West Bengal, Uttar Pradesh, Kerala and Madhya Pradesh-- or their representatives will apprise about the current situation in their states and the progress of developmental projects.

The centre is planning to intensify operations in Naxal-affected areas in Chhattisgarh where major attacks were witnessed in the last few years hitting security forces.

Mann Ki Baat: The radio programme comes after his recently-concluded visit to the United States where he addressed the 76th session of the United Nations General Assembly (UNGA). The high-level segment of the 76th UNGA began in New York on Tuesday, and international leaders and diplomats addressed the world forum at the key session.

Mann Ki Baat: Prime Minister Narendra Modi will address the 81st episode of his monthly radio programme `Mann Ki Baat` on Sunday. The programme will be broadcast on the entire network of AIR and Doordarshan and also on AIR News and mobile app.